Home
Stocks
: Kaixin Auto stock pulls back after a ‘surprise’ rocket ride higher
Prev Article Next Article
This post was originally published on this site

Shares of Kaixin Auto Holdings Inc. tumbled in premarket trading Tuesday, after skyrocketing 15-fold over the past four sessions, as the China-based auto-dealership company confirmed there was no news released to explain the volatility.

“The spike of stock price came as a surprise to people in Kaixin,” the company said in an emailed statement to MarketWatch.

The company’s last 6-K filing with the Securities and Exchange Commission was on Aug. 26. At that time, Kaixin said it decided to halt its used-car dealership operations, meaning second-quarter revenue will be “significantly lower” than in prior periods, and that “it may not have meaningful revenue starting in the third quarter of 2020.” 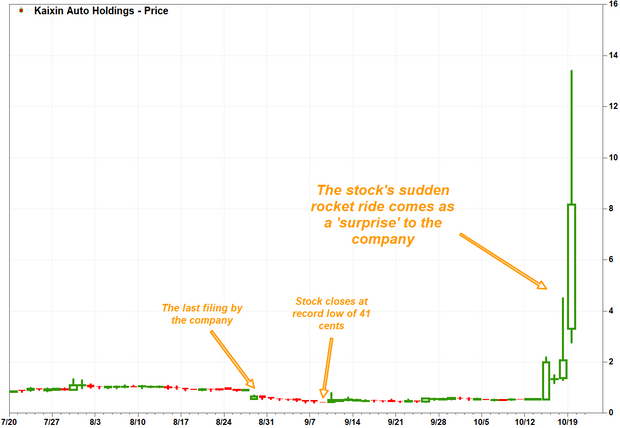 “There is no change in the status of Kaixin’s business operations since the company filed the last 6-K on Aug. 23, 2020, and its dealership business is still in halt,” the company said.