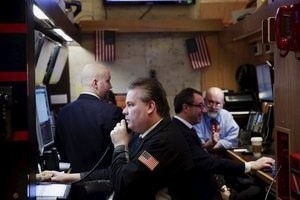 Investing.com – The Dow climbed on Tuesday as traders weighed up the prospect of further coronavirus stimulus with lawmakers set to resume talks.

“Too little support would lead to a weak recovery, creating unnecessary hardship for households and businesses,” Powell said in a speech at a virtual annual meeting held by the National Association for Business Economics. “Over time, household insolvencies and business bankruptcies would rise, harming the productive capacity of the economy, and holding back wage growth.”

Pelosi and Mnuchin spoke by phone on Monday and will continue the conversation on Tuesday, said Drew Hammill, a Pelosi spokesman.

The hopes for stimulus have helped boost value stocks – those linked to the strength of the economy, with financials, industrials, and materials trading above the flat zone.

Industrials were held back, however, by a fall in Boeing (NYSE:BA) after the aircraft maker cut its forecast for demand and warned it could take more than a decade to recover from the Covid-19 pandemic.

The aircraft maker forecasts demand for 18,350 commercial airplanes in the next decade, down 11% from its 2019 projection.

Tech, meanwhile, struggled for momentum amid expectations that rising rates will turn investors away from growth stocks, which tend to outperform in low-interest environments.

Apple (NASDAQ:AAPL) and Microsoft (NASDAQ:MSFT) Alphabet (NASDAQ:GOOGL) Amazon.com (NASDAQ:AMZN) and Facebook (NASDAQ:FB), which together make up a quarter weighting of the S&P 500, traded in the red.

Energy was pushed higher by rising oil prices amid supply disruptions as Hurricane Delta and Tropical Storm Gamma have shut-in production in the Gulf of Mexico. Still, demand concerns linger after the Energy Information Agency forecast output to fall by 800,00 barrels per day, a smaller decline than its previously monthly forecast for a 870,000 drop.

In other news, NVIDIA (NASDAQ:NVDA) jumped 2% after BMO raised its price target on the stock to $650 a share from $565 per share, citing higher earnings-per-share potential.