Home
Stocks
Need to Know: The Fed might never hike rates again. Here are growth stocks for the long run, according to one strategist
Prev Article Next Article
This post was originally published on this site

So just how significant was Federal Reserve Chairman Jerome Powell’s speech on inflation? In the speech that markets were eagerly awaiting, Powell announced the Fed would target inflation to average 2% over time, and that the central bank won’t feel obliged to raise interest rates if it believes the economy is running at full employment.

The S&P 500 SPX, +0.16% on Thursday edged up to a new record, while the Nasdaq COMP, -0.34% slipped, though to its second-highest perch ever. U.S. Treasury yields rose, particularly at the long end TMUBMUSD30Y, 1.535%, which isn’t the direction you would expect from an ostensibly dovish move. Perhaps, as University of Oregon professor Tim Duy wrote, the market perceived there was no “meat on the bones of this policy” because the central bank left implementation fuzzy.

But that is the short-term view. Joachim Klement, investment strategist at U.K. brokerage Liberum Capital, said the Fed’s change of policy goals makes it almost inevitable that the next five years will be dominated by a Japan-like environment of low nominal and real, or inflation-adjusted, interest rates.

In a note entitled, “Low rates forever? — Possibly,” Klement points out that had the Fed abided by its new inflation strategy, it would have left interest rates unchanged for a decade after the 2008 financial crisis. “Given the historic experience and current Fed and market implied forecasts, we find it safe to argue that the Fed will not hike interest rates not just for three years, but for the next five years if not longer,” he says. 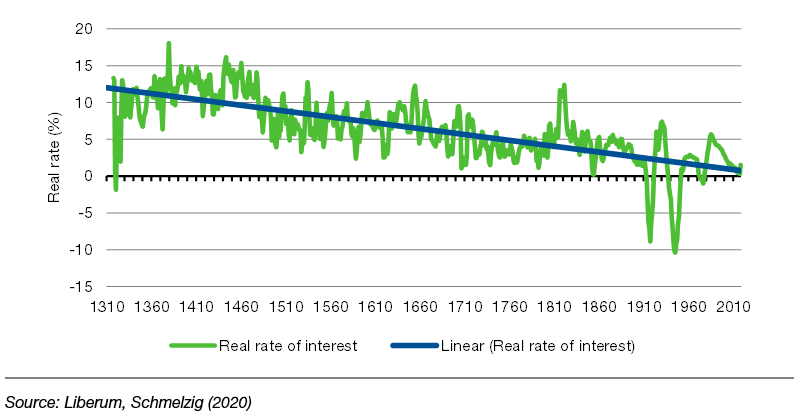 The long-run trend on interest rates is clear.

Quantitative easing will continue because the Fed will need to keep nominal rates low across the yield curve, he says. For 10-year Treasurys TMUBMUSD10Y, 0.751%, this means a level of 2% to 2.5% to keep it in the range over the last decade — which would imply a big upward move from current depressed levels “but not enough to impede the cost of borrowing.” The Bank of England and European Central Bank will also have to keep interest rates low, just to avoid having their currencies appreciate versus the dollar DXY, -0.74%, though the difficult economic situation Europe and the U.K. are facing would make any tightening unlikely anyway.

He concedes, over the next 12 months, growth stocks are priced for perfection, and value may outperform. “However, low nominal and real rates mean that discount factors for future cash flows will decline and with it, stock market valuations are likely to increase. Stocks with a larger portion of cash flows further in the future (in other words growth stocks) experience a stronger rerating than high dividend stocks and stocks with less growth,” he said.

Japanese Prime Minister Shinzo Abe said he will resign over health issues — triggering losses for Japanese stocks NIK, -1.40% and a rise in the Japanese yen USDJPY, -1.13%.

U.S. President Donald Trump accepted the Republican nomination for president, while saying former Vice President Joe Biden would be a “destroyer” of American jobs. Since February, 12.88 million jobs have been lost, according to the Labor Department. There was a huge shift in odds in Trump’s favor on the Betfair exchange, with Biden now just narrowly the front-runner.

Friday’s session of the Jackson Hole symposium includes an address from Bank of England Governor Andrew Bailey, and academic takes on policy uncertainty, expectations in monetary policy and post-pandemic monetary policy. There is also a host of economic releases, including on personal income, trade, and consumer sentiment.

There were a number of earnings reports released after markets closed on Thursday, with HP HPQ, +2.01% and Dell Technologies DELL, +0.48% each reporting strong demand for personal computers, due to the coronavirus pandemic keeping workers at home.

This masterpiece painting has been stolen — for a third time.