Home
Stocks
CityWatch: A rough September lies ahead for New York City’s tourism sector as major events pivot to virtual
Prev Article Next Article
This post was originally published on this site 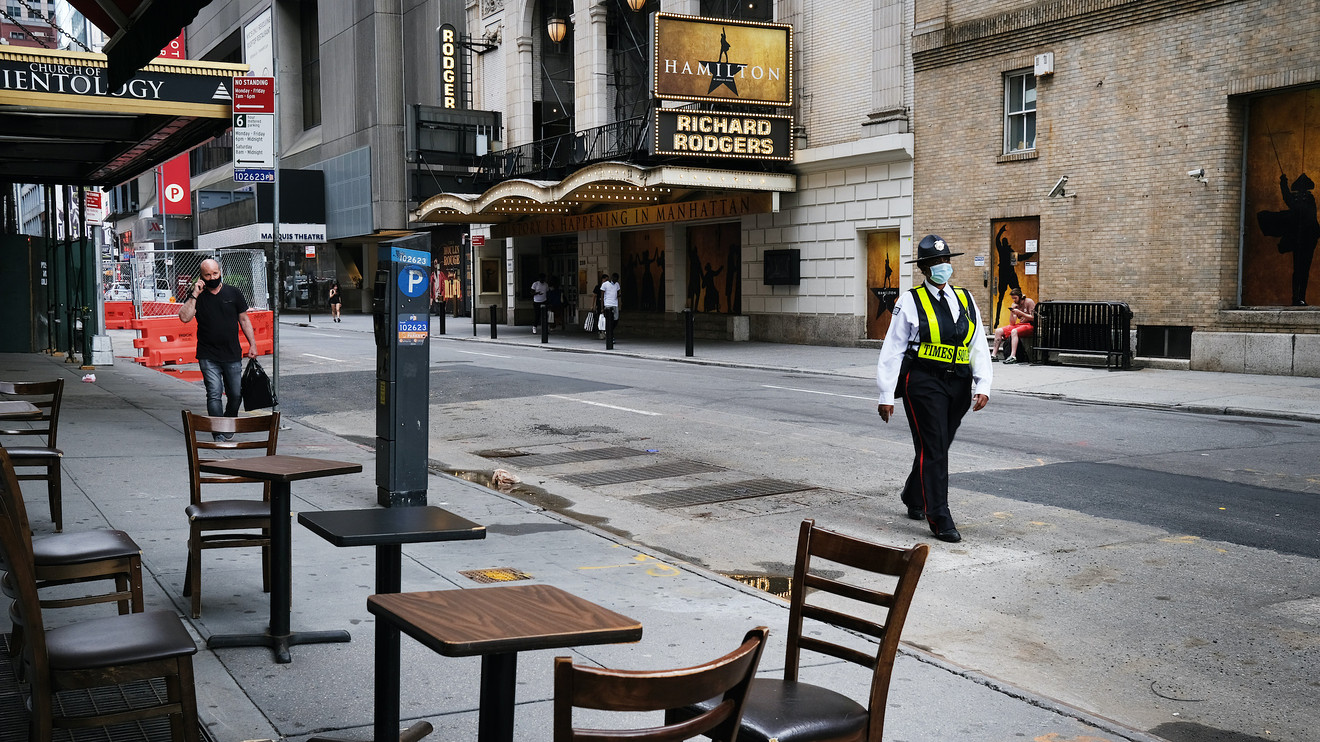 The U.S. Open tennis tournament, New York Fall Fashion Week and the U.N. General Assembly meetings, which together attract nearly one million attendees and make every September an economic windfall for New York City, will be unrecognizable this year.

The three high-profile September events have been dramatically scaled back, with limited in-person attendance and much of the activity set to be hosted online. Their dwarfed presence comes as New York City’s long-thriving, multibillion-dollar tourism industry braces for a punishing fall and winter after the coronavirus-induced economic shutdown this spring darkened Broadway, canceled conferences and emptied hotels.

The city—an early epicenter of the outbreak that has now become one of the cities with the fewest cases in the U.S.—saw a roughly 90% decline in visitors during the last quarter of fiscal year 2020, which ended June 30, New York City Comptroller Scott Stringer said in a recent interview with MarketWatch. That amounted to an estimated loss of $270 million in hotel taxes, in addition to another $250 million in other tourism-related sales tax revenue during that period, Stringer said.

“In the midst of the pandemic, we are starting to realize that our 62 million [annual] tourist visitors will be no more in the short term,” Stringer said. “We haven’t lost our mojo as a city, but the pandemic has curbed what we can do to attract people from all over the world.”

Tourism to the Big Apple has experienced record growth in the last decade, providing a boon to multiple sectors of the economy. In 2019, visitor spending supported more than 403,000 jobs and generated some $72 billion in total economic activity, according to a July report published by NYC & Company, the city’s official tourism agency. Last year, travel and tourism accounted for $7 billion in state and local taxes, including $4.9 billion for the city, according to the report.

After the economic devastation of this spring, the next 12 months are expected to be even more painful. The comptroller’s office is projecting a $1.5 billion loss for the city’s tourism tax revenue in fiscal year 2021, Stringer said. That represents 25% of the city’s normal revenue from hotel occupancy taxes and sales tax revenue, a spokeswoman said.

Last September, the fall fashion shows, tennis matches and U.N. events drew more than 908,000 people and generated an estimated hundreds of millions of dollars in revenue via hotel stays, restaurant meals, retail purchases, and transit rides, as well as sales and occupancy taxes.

September 2020 will be very different.

Starting Aug. 31, the U.S. Open tennis tournament will be played at the USTA Billie Jean King National Tennis Center in Queens without fans in the stands. (The 46,000-seat sports complex hosted an emergency hospital for coronavirus patients and a meal distribution site earlier this spring.) Last year, the long-running tournament posted record attendance, with nearly 738,000 spectators attending matches and another 115,355 participating in the U.S. Open Fan Week, a seven-day stint of free activities ahead of the main event.

New York’s famed biannual Fashion Week will feature a variety of new digital programming at its next event scheduled for Sept. 13-17, a spokesman for event production company IMG said. Whether live runway shows will take place with in-person spectators is unclear. The company recently polled designers to gauge their interest in showing clothing collections, while the Council of Fashion Designers of America, which represents designers, had previously said that no live shows with audiences were expected to be staged in September, WWD reported.

Meanwhile, the U.N. General Assembly’s annual meeting of world leaders will take place Sept. 15-30 with no more than 200 New York-based diplomats likely permitted in the Midtown East headquarters, said Stéphane Dujarric, a spokesman for the U.N. Secretary-General. Several thousand more people are expected to participate online, in contrast to the 18,000 average daily attendees who came through the doors last year, he said. This year marks the 75th anniversary of the founding of the United Nations, and the event was expected to draw more visitors than usual to celebrate the occasion.

September is a crucial month for the restaurants and bars that cater to international dignitaries, tennis fans and fashion week partygoers. Summer tends to be a slow time for the food and beverage industry as the city empties out, and business owners rely on events such as Fashion Week to jump-start fall nightlife activity, said Andrew Rigie, executive director of the NYC Hospitality Alliance, a not-for-profit association that represents restaurant and nightlife establishments.

“When these major events are either canceled or hosted virtually, our local businesses feel the financial impact, both for the business and for workers,” Rigie said. In addition to evaporating income, “part of the social fabric of our city” will be lost without these events to look forward to, he said.

The loss of the September swarm of visitors will be felt in the city’s bottom line—and by the scores of workers who tend to them—but the economic impact must be weighed against New Yorkers’ health and safety, said City Councilwoman Farah N. Louis, a Democrat who is a member of the Economic Development Committee and who represents the neighborhoods of Flatbush, East Flatbush, Midwood, Marine Park, Flatlands, and Kensington in Brooklyn.

“Regaining the tourism revenue this fall means letting a million potential carriers into our city,” Louis said. “The relative loss of allowing the coronavirus to ravage New York once again is much more detrimental to the economy than the relative and temporary tourism industry deficit.”

“Many of these events can still be attended online and gain revenue through creative ways,” she added, suggesting that event broadcasters might even expand their audiences and merchandise sales through virtual programming.

To some degree, the pandemic is accelerating trends related to the use of technology that were already happening before the virus shut down the city in March, said Paul Hardart, a professor at New York University’s Stern School of Business and director of its Entertainment, Media & Technology Program.

Hosting a runway show, for example, is an expensive endeavor. This fall presents an opportunity for New York designers and event producers to experiment with interactive digital events and social media components that could bring down overall costs, Hardart said, while still providing a way for buyers, sellers and retailers to congregate.

“The big goal for all of these events is … to keep it going, to keep the relevance there,” he said.

As the city looks toward recovery, supporting mom-and-pop businesses in the outer boroughs as much as Midtown attractions is crucial, Stringer said. Small businesses, which rely on both office workers and tourists, have been hit particularly hard during the pandemic. A July 20 report by the Partnership for New York City predicts that as many as one-third of the city’s 230,000 small businesses—more than 75,000 of them—will not survive. At the same time, both the city and the state are facing major budget shortfalls.

The federal stimulus package Congress is deliberating will help determine the city’s next steps, like whether the city can reopen schools safely, maintain essential services, and address structural budget damage, Stringer said. Those steps, in turn, will help determine how quickly New York City’s tourism sector can be revived.

“There’s no one tourist event that will sink the city,” Stringer said. Of greater concern, he said, is the cascade of fallout from the pandemic and resulting economic crisis that “will hurt revenue but also will make it harder to start to bring people back to the city.”

Dan O’Flaherty, a professor of urban economics at Columbia University, said research supports the argument that, taken individually, events such as the U.S. Open are insignificant revenue-generators in terms of the city’s overall budget. Some big events can be more hassle than they’re worth, and in some cases may displace regular economic activity, he said. During the U.N. event, for example, traffic on the East Side is notoriously congested and people avoid the area.

One bright spot is that when the city is finally ready to welcome tourists again, they could be knocking down the door.

Also see: Taking the New York City streets back before the cars return

New York state is consistently ranked in the top couple of states that likely travelers say they’re interested in visiting when it’s safe to do so, said Lori Pennington-Gray, a professor and the director of the Tourism Crisis Management Initiative at the University of Florida. For the past few months, her team has been surveying Americans weekly on their anxieties about travel and how the pandemic will affect future travel plans.

“Week after week, we’re getting a very similar response that, when asked what types of activities people will participate in again when they can first travel, visiting big cities is always somewhat in the top of the responses,” Pennington-Gray said.