Home
Stocks
Mark Hulbert: Stock trading should be heavy this summer but bulls might not have their day in the sun
Prev Article Next Article
This post was originally published on this site

Rather than drying up this summer the way it usually does, U.S. stock market trading volume should remain heavy — and that’s potentially bullish for stocks overall. At least is the novel argument some analysts are making.

Not so fast. To be sure, there is some statistical support for the notion that higher volume is more bullish than lower volume. Consider a study of summer stock-market weakness that appeared two decades ago in the American Economic Review. The study’s authors found that the summertime performance of a country’s stock market was “significantly related to both length and timing of vacations and also to the impact of vacations on trading activity in different countries.”

That is why the stock market in the summer of 2020 may not follow the typical pattern. Because of the coronavirus pandemic, few of us will be taking a vacation. And, as some have pointed out recently, working from home has led many to become hyperactive day traders.

So that in turn should mean that stock market volume will be higher than usual this summer.

Nevertheless, it is doubtful that this higher volume will propel the market upward in coming months than it would have risen to anyway. Consider monthly NYSE trading volume over the past four decades. Because volume has steadily grown over the years, I had to de-trend the data to search for any monthly patterns. I did so by comparing each month’s trading volume since 1985 to its trailing 12-month moving average, and then averaging the ratios for each month. Those averages are what is plotted in the chart below. 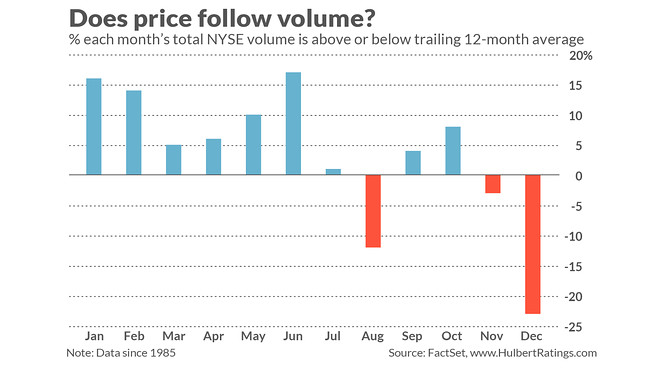 Notice there’s no clear pattern to explain any of the well-known seasonal patterns. June actually has the highest average trading volume of the calendar, for example, despite it being a seasonally weak month. January has the second-highest average trading volume, and it is one of the strongest months of the calendar for the broad market averages such as the Dow Jones Industrial DJIA, +0.36% nd the S&P 500 SPX, +0.37% . (It is the month of the so-called January Effect, after all).

To be sure, July and August have below-average trading volumes, so you might think that those two months provide some reason for expecting summer weakness in a “normal” year. But notice that December has even lower average trading volume than either July or August; and December is one of the stronger months of the stock market calendar.

And we can’t forget September — the worst month of the calendar for average stock market performance. As you can see, trading volume in that month is above average.

All in all, there is precious little evidence that volume leads price. In fact, academic research contains some statistical support for the idea that it’s the other way around. That is, as stocks head higher, higher volume follows in its wake. If that is the case, of course, then you’re on even shakier ground using higher volume as a reason to be bullish.

Read:Here are the 10 most under and overbought S&P 500 stocks, according to Goldman

More: Private equity is on shaky ground and stock investors should watch their step