Scrambling to get ahead of coronavirus “economic shock,” the Bank of England delivered a surprise interest rate cut, on the heels of a Federal Reserve move last week. All eyes will be on the European Central Bank on Thursday, particularly due to the region’s rapidly expanding outbreak.

The rate cut is boosting European stocks, but U.S. futures are sliding after President Donald Trump’s no-show at a coronavirus news conference on Tuesday, where investors were hoping to hear about a payroll tax cut and other measures.

“Should you buy stocks today, or should you be selling stocks today?” asks Deutsche Bank Securities’ chief economist Torsten Slok in our call of the day. And he says they are ”still very, very cautious.”

“We just think it’s too early to put risk on, given some of the significant risks that are both with the progression of the disease and the negative effects of financial conditions tightening and the policy response is not quite being there yet,” Slok told MarketWatch. These three points, he said, are the most crucial determinants in whether stocks are going to fall a lot more or rebound.

“In some countries things have been done, but generally speaking, including of course, the U.S., we’re still waiting to see exactly what the response will be and very importantly, how it will be received by markets,” he said. 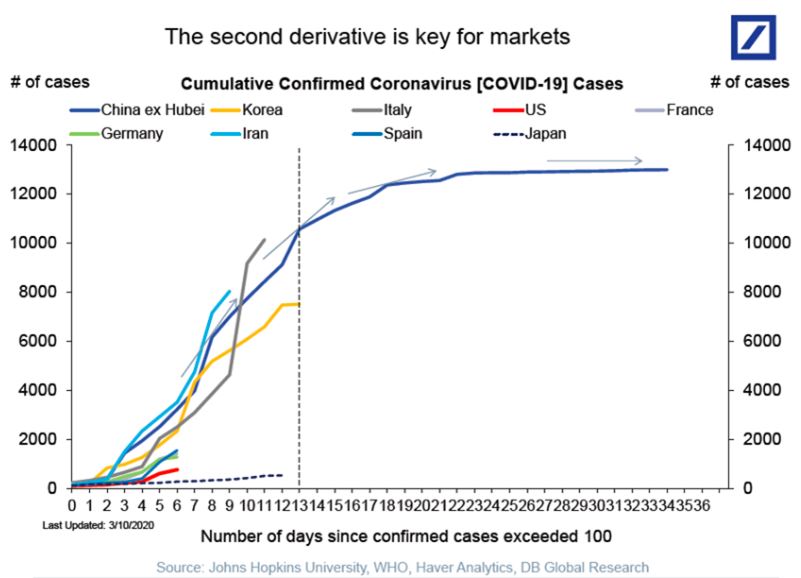 Slok advises watching the virus’s progression in the U.S. “If the U.S. hasn’t stabilized, it’s difficult to see any significant stabilization elsewhere the world,” including markets, he said. What’s clear, he says, is policy action to help cushion the economy from the virus had better come fast.

“We don’t have three weeks to sit around and discuss academics. We need something and relatively soon that’s targeted toward putting money into the hands of those who are going to spend it,” be it consumers or companies, Slok said.

Wait for the bottom. Our chart, from Longview Economics and shared by The Market Ear, shows stocks also bounced in the crash years of 1929, 1987 and 2008. 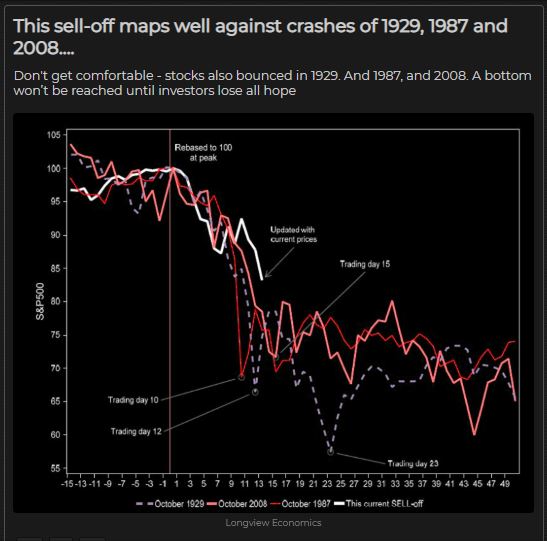 Looks like the entire planet is shutting down pic.twitter.com/FIcd1RfQpv

U.K. health minister Nadine Dorries has the coronavirus, prompting testing for several politicians who attended an event with her — Prime Minister Boris Johnson was there too. The number of U.S. infections has passed 1,000, the West Coast is halting big gatherings, the Coachella music festival is postponed and sports events will be played to empty arenas.

Vanguard says investors have been moving money into, rather than away from stocks.

Why coronavirus hoarding will be worse in the U.S.