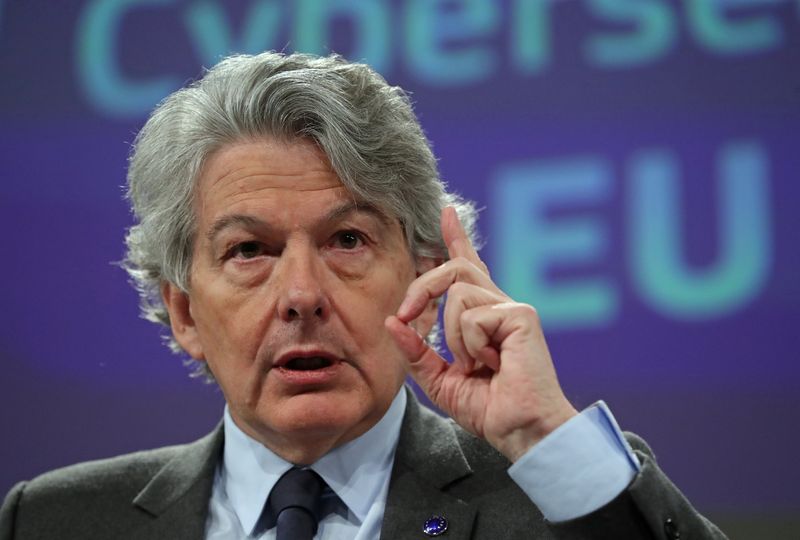 © Reuters. European Commissioner for the Internal Market Breton gestures as he communicates on the EU’s 5G plan in Brussels

PARIS (Reuters) – Europe may have lost the battle to create digital champions capable of taking on U.S. and Chinese companies harvesting personal data, but it can win the war of industrial data, Europe’s industry policy chief said on Saturday.

Vast troves of data from how fast we drive our cars to how much time a robot needs to churn out products in factories have yet to be fully exploited, said Thierry Breton, the European Commissioner in charge of the EU single market.

Alarmed by the dominance of U.S. and Chinese tech companies such as Google (NASDAQ:), Amazon (NASDAQ:) or Huawei, the EU is leaving behind the “laissez-faire” attitude of the early 2000s and ratcheting up regulatory pressure to protect its businesses.

The new approach will be on display on Wednesday when Breton unveils the bloc’s new data and artificial intelligence strategy.

“We’re entering a new phase. The battle for industrial data starts now, and the main battlefield will be Europe,” Breton, a former French finance minister, told Reuters in an interview.

Breton said the EU had a unique opportunity to win the next phase of the digital revolution centered on the harvesting, management and analysis of data from industrial fields such as factories, transport, energy and healthcare.

“Europe is the world’s top industrial continent. The United States have lost much of their industrial know-how in the last phase of globalization. They have to gradually rebuild it. China has added-value handicaps it is correcting,” Breton said.

“But the bulk of the industrial value chain, from large groups to SMEs, is based in Europe today. That’s why all eyes are on Europe right now,” he added.

Breton, a former CEO of French IT giant Atos and telecoms group Orange, said the European Commission will unveil a three-pronged approach on Wednesday, consisting of strict rules, investing in infrastructure and unrolling a sector-specific approach.

Reuters exclusively reported on Jan 29 a 25-page draft document outlining the measures to create a single market in data, that could still be tweaked ahead of the Feb. 19 presentation.

It will include an array of new rules covering cross-border data use, data interoperability and standards related to manufacturing, climate change, the auto industry, healthcare, financial services, agriculture and energy.

Other rules in the coming months will open up public data on geospatial, the environment, meteorology, statistics and corporate data across the bloc for companies to use for free.

On Saturday, Breton insisted on the urgency of the task ahead. “Europe is not naive, it can very well see what’s going on. That’s why we have to organize ourselves now, including when it comes to the deployment of the first 5G networks,” he said.