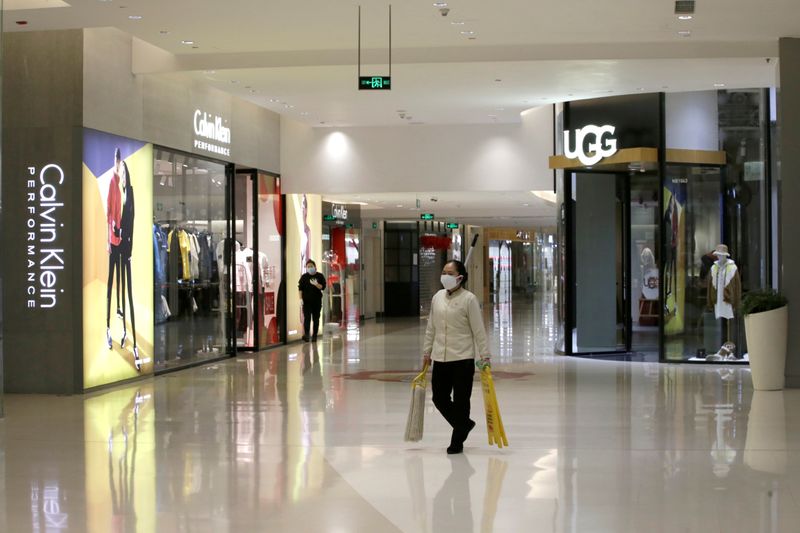 MILAN (Reuters) – The luxury goods industry normally relishes the spotlight, but in the case of China’s coronavirus it is ruing being one of the most globally exposed sectors to an epidemic that risks all-but wiping out its sales growth this year.

Brands from Burberry (L:) to Estee Lauder (N:) are shutting stores and cutting profit forecasts as business in the industry’s biggest market has virtually ground to a halt.

“Shopping malls are closed, the few stores that are still open are working on reduced hours and above all there is no (customer) traffic,” said Stefano Sassi, CEO of Italy’s Valentino.

Burberry was the latest big brand to warn of a hit to demand on Friday, withdrawing its financial guidance for 2020 and saying it had closed more than a third of its stores in mainland China.

It said spending by Chinese tourists in Europe and elsewhere had not been hit as much, but given widening travel restrictions, it forecast this would worsen in the coming weeks.

With entire cities in the world’s second biggest economy shut off, flights canceled and several countries, including the United States, banning entry to visitors who have been in China recently, the luxury industry is now facing a major sales hit.

Jefferies analyst Flavio Cereda cut his full-year growth estimates for the sector to 1% from 5% at constant currencies.

“The shortfall is around 12 billion euros and the risks is to de facto ‘skip’ a year,” he said, forecasting a 35% decline in Chinese luxury spending in the first quarter.

The epidemic has hit luxury brands while they are still reeling from a plunge in sales in the shopping hub of Hong Kong following months of often violent protest.

Some offset that thanks to growth in mainland China last year, but the coronavirus epidemic has put paid to that.

American Airlines (O:) and United Airlines (O:) among others have suspended flights from U.S. hubs not just to mainland China but also to Hong Kong, one of the world’s top five luxury destinations, due to low demand.

The outbreak also coincided with China’s Lunar New Year holiday, which last year saw shoppers rack up about $150 billion in spending, including on travel and restaurants.

Chinese consumers account for more than a third of global spending on luxury goods, with most purchases made abroad. On average, Chinese buyers in Europe spend 790 euros ($865) per purchase, but that can rise to 2,800 euros if they splurge on jewelry, according to tax-free shopping specialist Planet.

They have fueled the sector’s breakneck growth of the past decade and accounted for 90% of last year’s increase in revenues to 281 billion euros, consultancy Bain & Company estimates.

“Because the Chinese represent a third of the luxury audience, any percentage point that you lose in sales ends up equating to quite a sizeable impact in terms of bottom line,” David Perrotta, Planet’s UK country manager, told Reuters.

This week, Estee Lauder, which makes Clinique skincare products, Coach handbag maker Tapestry (N:) and Capri, the owner of Michael Kors, Versace and Jimmy Choo, all cut their profit forecasts for the year due to the virus outbreak.

Ralph Lauren (NYSE:) has shut about half of its 110 stores in China, while jewelry maker Pandora (CO:) said business in the country was at a standstill.

Make-up specialist L’Oreal (PA:) said e-commerce, which accounts for almost 50% of its sales in China, would help it weather the crisis, but still expected an impact on demand.

Louis Vuitton owner LVMH (PA:), the world’s biggest luxury group, has said that if the virus spread is contained by the end of March its impact wouldn’t be too bad. Yet it reported a 40% drop in Hong Kong revenues in the fourth quarter and the health scare is likely to hit its duty-free business.

The French conglomerate, which recently bought U.S. jeweler Tiffany, is better placed to cope than others thanks to a strong U.S. business, said Bernstein analyst Luca Solca, who also favors Moncler (MI:) and EssilorLuxottica (PA:).

Firms like Richemont (S:), Swatch (S:) and Kering (PA:) are more exposed, as they make between 45% and 59% of their revenues from Chinese nationals, according to Bernstein.