Home
Stocks
: Public pensions don’t have to be fully funded to be sustainable, paper finds
Prev Article Next Article
This post was originally published on this site 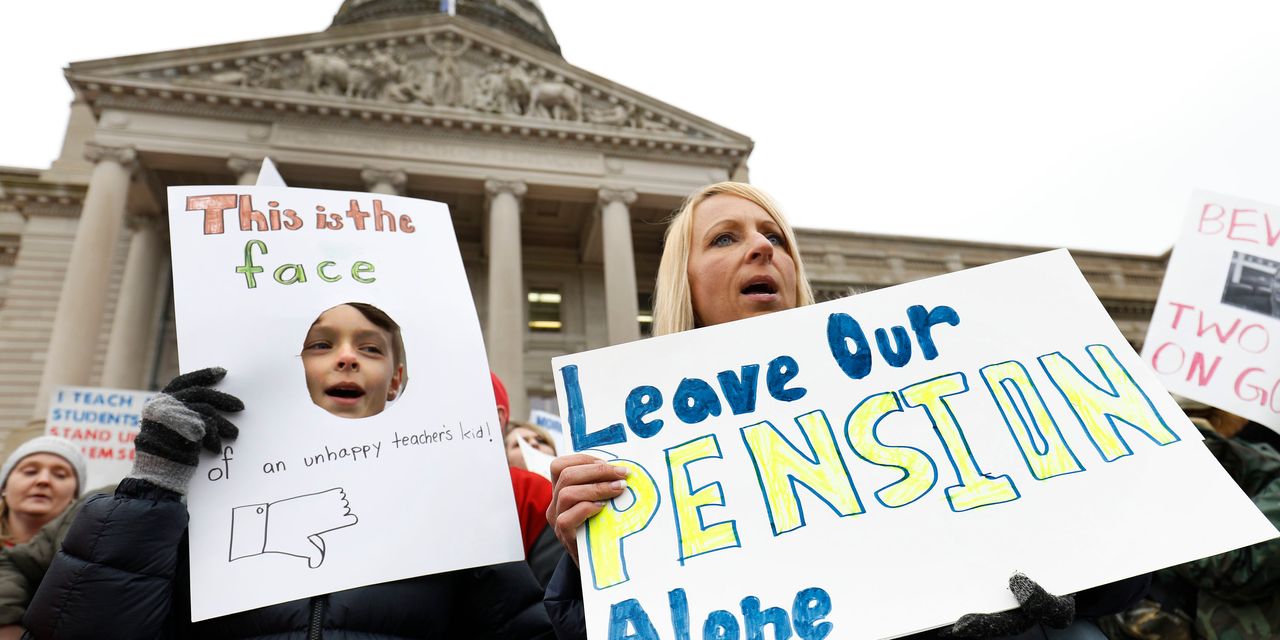 It’s a well-known fact: municipal pension funding is in crisis, leaving workers and retirees at risk of running out of money in old age, even as “legacy” commitments eat into city budgets, leaving little money for taxpayer services.

But what if it’s not true?

The way state and local governments have always accounted for their pension costs is backwards, suggests a new working paper, and its proposal for reversing that represents a sea change for public finance.

Put in plainer English, there’s no reason that municipalities need to have money in the bank to pay the entirety of their calculated current and future benefits now. Pensions can be seen as what the authors call “implicit debt,” like Social Security benefits, rather than an explicit commitment that must be paid off in a certain period of time.

Governments “don’t have to pay off their debt like a household does,” said Louise Sheiner, policy director for the Hutchins Center on Fiscal and Monetary Policy at the Brookings Institution. “They can just keep rolling it over. They’re never going to go out of business and have to pay all at once.”

Sheiner is co-author, along with Jamie Lenney of the Bank of England, Byron Lutz of the Federal Reserve Board of Governors, and Brown University’s Finn Schüle, of Sustainability of State and Local Government Pensions: A Public Finance Approach, which was presented at a Brookings conference in March.

State and local liabilities can also be likened to the federal government’s deficit and debt, Sheiner said in an interview with MarketWatch. Most economists think that as long as those numbers stay constant as a share of the economy, it’s not problematic.

“What’s worrisome is if it’s accelerating,” Sheiner said. “But we said, we have had these debts for a long, long time. Why make one generation responsible for paying it all off? Find the spot where every generation pays the same amount. Keep it stable.”

The goal, in other words, should be to keep a municipality’s contribution at an amount that’s sustainable for the current year’s budget, as well as a hypothetical city budget in 30 years.

“Keep it stable” is a vastly different form of math than what city budgets use now. Every year, an actuary calculates how much a municipality must pay based on assumed returns from investments and contribution amounts from current employees, in order to fully fund the entire pension for all current employees and retirees.

“We view the basic point of the paper as very simple, yet something that people hadn’t thought of,” Sheiner said. Pensions should be thought of as a “budget problem” not a “debt problem,” she suggested.

To be sure, just as there are people who think the federal debt and deficit are inherently problematic, no matter their size, many will also view the paper’s proposal as a form of creative accounting designed to mask the pension time bomb. The debate over public pensions is often contentious.

“This is a very political issue,” Sheiner told MarketWatch, “and it’s nerdy and complex. People don’t understand how to think about public debt either. People are used to thinking that the government’s budget is like their household budget, and that state and local governments are not supposed to have debt.”

It bears noting, as the authors do in the paper, that there are several municipal entities whose pensions are currently in deep trouble, including the states of New Jersey and Illinois.

And the current cost curve of pension funding in aggregate has been helped substantially by difficult reforms made over the past decade or so, Sheiner said, more of which may be helpful.

Among them: governments shifting new hires to defined-contribution plans, similar to private-sector 401(K) plans, rather than defined-benefit plans. Such plans aren’t just more affordable, they may also help diffuse some of the resentment taxpayers feel when government workers get fat retirement checks.

Still, ongoing tweaks to make plans more sustainable is a far cry from the crisis response many state and local governments have been engaged in for the past several years. Some have cut ongoing city services to the bone even as they plow more money into pension funds, a step Chuck Reed, the former mayor of San Jose, Calif., famously dubbed “service-level insolvency.”

Others have gone more deeply into debt to pay down their assumed liabilities.

See: American cities and states have issued $72 billion of pension bonds. Here’s what that means

Sheiner suggests taking a breath looking at the pension issue more holistically. For governments, the decision about how much to fund is simply deciding how best to use budget dollars, she said.

“The alternative for a city or state is to say, we can put money into things that made it better to live here,” she said. “We can spend on getting lead out of water, putting money into the schools… it’s another way of making the future better. You can think of them both as investments, and it’s just a question of which has a better rate of return.”

Read next: Federal stimulus is a ‘lifeline’ for communities whacked by the corona-crisis, as scars of 2008 linger