Home
Stocks
: Plenty have tried to create a new Silicon Valley, but this new NBA owner and tech founder may be succeeding
Prev Article Next Article
This post was originally published on this site

The Utah Jazz have been winning a lot this season, but not as much as their new owner.

Just look back at three days in late January. The Jazz — which Ryan Smith bought for $1.66 billion late last year — beat the Dallas Mavericks for their 10th win in a row on Jan. 27, the same evening that Qualtrics International Inc. XM, +5.23%, the software company Smith co-founded with his father Scott and brother Jared in 2002, set the price for its $1.55 billion IPO. The next day, Qualtrics shares would soar 52% in their trading debut, giving the software company a market valuation of $27.3 billion; a day later, the Jazz would win their 11th straight, putting them solidly at the top of the NBA standings.

So it’s good to be Ryan Smith. At the NBA All-Star break, the Jazz have a league-best record of 27-9. At the same time, Qualtrics is a major mover in a market estimated to be worth $60 billion, and topped Wall Street estimates for earnings and sales in its first quarterly results as a publicly traded company Tuesday.

The combination of a successful basketball team and another large, publicly traded tech company are helping to secure an even loftier goal for Smith: Making the Utah region known for something more than majestic mountains and the Church of Jesus Christ of Latter-day Saints.

“His goals and objectives have never been anything but over the top,” Todd Pedersen, CEO of Vivint Smart Home Inc. VVNT, +2.54%, told MarketWatch.

Qualtrics got its start in the Smith’s basement, which is near Pedersen’s home. And it’s not just Smith and Pedersen who are neighbors — their companies are right next to one another as well. And they can now watch the NBA team that Smith owns play at an arena that bears the name of Pedersen’s company, as they recently did for a nationally-televised Jazz game against the defending champion Los Angeles Lakers.

Smith sits in a position occupied by few in the history of corporate America: head of a publicly traded company, and owner of an unrelated sports franchise. There is no such owner in the National Football League, Major League Baseball nor the National Hockey League, though Wayne Huizenga once owned franchises in all three while leading Blockbuster Video.

The NBA seems more willing to welcome public-company executives to its ranks, even while denying bids from Oracle Corp.’s ORCL, -0.37% co-founder Larry Ellison. Another recent majority owner is Alibaba Group Holding Ltd.’s BABA, -3.71% co-founder and Executive Vice Chairman Joseph Tsai, who snapped up the Brooklyn Nets for a record $2.35 billion in 2020. The reclusive Robert Pera, CEO of Ubiquiti Inc. UI, +0.02%, is also owner of the Memphis Grizzlies.

Vivek Ranidive was still chief executive of Tibco Software Inc. when he led a group that bought the Sacramento Kings in 2013, and Miami Heat owner Micky Arison led Carnival Cruise Inc. for more than a decade while leading his franchise. In Pera’s first attempt to buy into the NBA, a bid for the Philadelphia 76ers, he was topped by a group that included AMC Entertainment Holdings Inc. AMC, +8.56% CEO Adam Aron, who also served as CEO of the Sixers for the first two years the group owned the team.

Read more: 5 things to know as Qualtrics prepares for its IPO this week

Smith has adroitly navigated the corporate and professional sports worlds by delegating day-to-day operations at each organization.

“As executive chairman, my job during the day is running Qualtrics with [Chief Executive] Zig [Serafin]. My job with the Jazz is at night, and I leave it to the coaches, players, and executives in charge of the team,” Smith told MarketWatch. “The product is proof of their abilities.”

At Qualtrics, CEO Zig Serafin and Smith are self-described “co-builders” of a company that has grown in the four-and-a-half years since Serafin joined as chief operating officer. (Serafin, who was named CEO nine months ago, says he and Smith are “joined at the hip” in their vision.) During that time, Qualtrics has expanded employees (from 1,100 to 3,500), customers (3,000-4,000 to 13,500), and revenue (from less than $200 million annually to $763.5 million last year, the company reported Tuesday).

As the NBA’s newest owner, “One of Ryan’s leadership styles is to delegate. He lets people think big, but by doing so through smart decisions,” Jim Olson, president of the Utah Jazz, told MarketWatch.

To that end, the Jazz use Qualtrics’ data analytics technology to improve team performance on the court and off, down to traveling, sleep, and diet for players and coaching staff.

The rise of Silicon Slopes 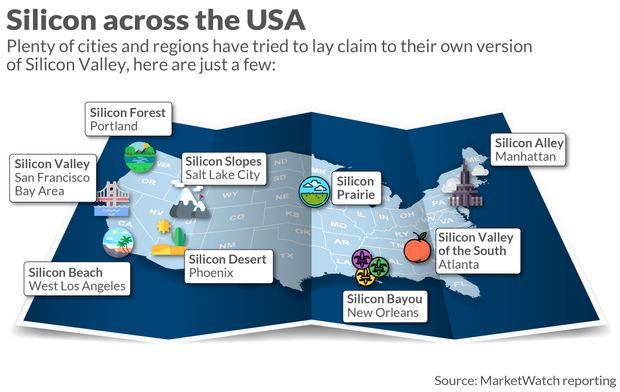 Such partnerships have fueled not just the success of the Jazz and Qualtrics but the larger Salt Lake City-Provo-Orem area.

“The Jazz and Sundance [Film Festival] are the two most identifiable brands in this state, and Ryan is smartly leveraging the Jazz for global reach,” says Domo Inc. DOMO, -7.30% CEO Josh James, who coined the term “Silicon Slopes” for the region and started the non-profit organization of the same name. “Ryan Smith used to be just another successful tech founder,” he said. “Now he is universally known as Ryan Smith, owner of the Jazz. This is a much larger megaphone and platform for the community.”

For example, the Jazz use Qualtrics software to collect and analyze fan data to improve their experience at home games on everything from concessions and apparel to parking and in-game entertainment. The two organizations have also teamed on 5 For The Fight, a nonprofit that invites everyone to give $5 for the fight against cancer. It is the Jazz’s official jersey patch, a rarity in the corporate-skewed NBA.

The winning ways of Smith and Qualtrics, amid a wave of freshly minted unicorns in the Salt Lake City region, underscores the rise of Silicon Slopes as one of a handful of regions in the U.S. to successfully mold itself after Silicon Valley. From the days of computer-networking pioneer Novell Inc. and word-processing maker WordPerfect Corp. in the 1980s, Utah has stood out as a tech outpost, albeit in the shadow of Silicon Valley and Seattle, but its recent string of triumphs has considerably raised its profile.

Indeed, the Provo-Orem area was deemed the best regional economy in America, according to rankings released in February by the Milken Institute.

Utah has among the most-open vaccination criteria in the nation. Starting in early March, anyone 50 and over is eligible for a jab—as well as those 16 and older with pre-existing conditions. By emphasizing “speed over perfection,” Nomi Health Inc. CEO Mark Newman says, the state has been able to send kids back to school since September, reduce the unemployment rate of 3% to a pre-pandemic level, and attain a budget surplus.

“The states that figure it out will have a long-tale of success over those states that don’t,” said Newman, whose direct healthcare company is partnering with the state of Utah and Qualtrics in bringing mass testing sites and vaccinations.

“Utah as a state has a get-it-done attitude,” says Newman, who moved to the state in 1993. “That goes back to Utah’s pioneer roots.”

James says Utah’s tech history can be divided into three phases: The first in the late 1980s and early ‘90s led by Novell and WordPerfect; a second in the late 1990s and 2000s, with internet plays Overstock Inc. OSTK, -1.66%, Omniture (acquired by Adobe Systems Inc. ADBE, -1.50% ), Altris Corp. (bought by then-Symantec Corp.), Iomega (acquired by then-EMC Corp.), and dozens of companies that were sold for millions each; and the current one of big independent enterprise companies like Qualtrics and Domo, and consumer plays like Vivint.

“A giant crop of companies are coming behind us,” James said, mentioning such unicorns as MX Technologies Inc., Lucid Software Inc. and DivvyPay Inc. “This feels like Silicon Valley in the ‘90s. It’s a really exciting time.”

“Silicon Slopes is doing great, building off the great history of [tech pioneers] Novell and WordPerfect in the state,” Steve Case, the co-founder of AOL who now leads venture-capital firm Revolution, told MarketWatch. The latest iteration, he added, is the byproduct of the region’s focus on enterprise technology and “strong collaboration in building a community.”

“Utah is a mixing bowl of cultures,” says Serafin, whose previous stop was 17 years in Redmond, Wash., all of them at Microsoft Corp. MSFT, -0.58%. “Utah is close to the coast, and San Francisco and Los Angeles. It’s not much different than Silicon Valley folks who moved to Nevada.”

In a state increasingly bustling with unicorns, none arguably have been hotter than Qualtrics, which went public in late January.

The company’s XM tracker stands for experience management, a software category that Qualtrics coined. Qualtrics, whose software lets businesses gauge how customers use their products so those products can be improved, has about 13,000 customers from about 9,000 two years ago. The company’s sales jumped 30% in the first three quarters of 2020 to $550 million, from $413.4 million a year earlier.

Smith’s “rare and unique ability to spot markets before they exist” gave him an vision of the experience economy that has helped evolve the way enterprises think about culture, brand, products, and people,” says ServiceNow Inc. NOW, -2.71% CEO Bill McDermott, who was previously CEO of SAP SAP, -2.39% when it owned Qualtrics.

Read more: 5 things to know as Qualtrics prepares for its IPO this week

Smith co-founded Qualtrics with his father and brother in 2002. On the cusp of going public in 2018, Qualtrics was acquired by SAP for $8 billion, making it the largest private enterprise-software acquisition in tech history when the deal closed in early 2019.

“It’s been an interesting journey,” Smith says. “For one-and-a-half to two years with SAP, they took our name everywhere while keeping our company independent and keeping the management team together, which is rare. It retained our culture, with an option to IPO.”

“To be in this spot as a public company, so many things had to go right,” Smith said. “It’s freakin’ incredible.”