Home
Stocks
Outside the Box: Bond investors will have a stormy 2021 and the Fed might consider hiking rates by early 2022. But hyperinflation? Nope
Prev Article Next Article
This post was originally published on this site

This made it quite different from your standard recession in the sense that a boom did not cause the bust. There was no endogenous buildup of unsustainable forces that led to the decline in output. COVID was much more akin to a natural disaster. This meant that the recession could be deep and painful, but it was unlikely to last very long.

This was crucial to understand (and a key component of my optimism last April) because it meant that the probability of a deflationary (or disinflationary) recovery was unlikely.

For example, the 2008 recession was an inherent credit crisis. Credit expanded too much, and when home prices collapsed that credit had to contract as well. Credit contractions are inherently long and drawn-out processes. Just as the build-up takes years to unfold so too does the contraction.

COVID-19 was completely different. There was no credit event here as evidenced by total lending: 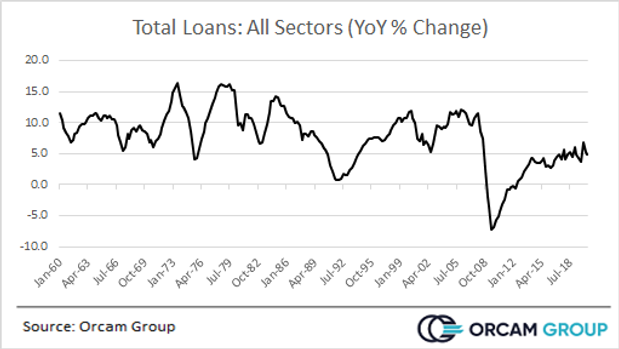 Credit contractions are inherently deflationary because they stifle balance sheet expansion which stifles aggregate demand. We need balance sheets to grow in order for the economy to grow. And boy did the government make sure that that happened, as they threw unprecedented levels of spending at the problem.

As I said last April, this was extremely bullish because, unlike 2008, there was unlikely to be prolonged damage to key parts of the economy. This damage was much more acute and to the extent that it was permanent, it seems to be permanently impairing businesses that were likely to be impaired in the long run anyhow (like commercial real estate, for instance).

Going forward, the three big things that make this recovery so different from 2010 are:

From an interest-rate perspective, all of this is even more magnified because interest rates are lower than they were in 2010. To understand this we have to consider the magnitude of the potential rate of change, not the rate of change alone.

I’ve stated many times since last April that interest-rate risk was unusually high coming out of the pandemic. That’s because the math behind interest-rate risk is simple: when rates TMUBMUSD10Y, 1.436% are lower you’re exposed to more potential principal risk in bonds because you aren’t earning as much interest to protect your potential principle changes. Therefore, when rates rise by 1% you’re far better off owning a 10% yielding T-Note in 1979 than you are when interest rates rise by 1% in 2021 and you’re earning just 1%. In nerd parlance, your risk-adjusted return is far worse because you have less embedded coupon protection from the bond.

This is the situation bond investors find themselves in today. They want safety and principal security, but they have to accept a potentially huge amount of principal volatility in the case that interest rates rise (ie, if inflation rises).

The kicker with all of this is inflation, of course. If inflation continues to rise then long interest rates will continue to rise and the Fed will become increasingly concerned that they need to raise rates to get ahead of the inflation risk. They’ve clearly communicated that this is not a near-term risk. But if we see core PCE prices at 2.0% like they were in July of 2018, then there’s a very real risk that the Fed will quickly change their tune about the future direction of rates.

Bond traders will try to anticipate these moves so they can properly hedge their interest rate risk going forward. Interest rates will continue to surge higher and bond investors will find themselves playing catch-up waiting for their very low coupons to cover years of lost principal.

So, how worried should we be about that potential outcome? After all, there are corners of the financial world that, much like 2008, are telling us that high inflation and even hyperinflation is a risk. I still think these concerns are overstated, but not nearly as low risk as they were in 2008.

Said differently, I think there’s a high probability that the economy will revert to its pre-COVID levels with similar or higher rates of inflation, but nothing resembling the 1970s or what we generally consider a “high inflation”.

From a macro perspective there are signs that No. 1 is beginning to meaningfully shift. This was most apparent in the response to COVID, during which the U.S. government swiftly passed the $2.2 trillion CARES Act and is on the verge of passing another $1.9 trillion package.

This $4.1 trillion in stimulus is more than four times what the U.S. government spent following the Great Financial Crisis. This is vastly different from the response to the GFC, when the Fed massively expanded their balance sheet and the U.S. Treasury spent relatively little.

The latter is the kicker here. Long-time readers of my work will know that policies such as Quantitative Easing do not have a strong inflation transmission mechanism because it is essentially an asset swap that changes the composition of private-sector assets but does not necessarily expand them.

Deficit spending, on the other hand, directly expands the quantity of financial assets held by the domestic economy and therefore has much more firepower. This is especially true when combined with Federal Reserve backstops and a lack of deflationary headwinds such as the ones we saw due to the credit crisis of 2008.

But let’s not get carried away here. The underlying economy is still quite weak and were it not for the massive stimulus package this recession would have been far deeper.

That said, as COVID subsides as 2021 progresses the economy should quickly revert to many of its 2019 trends. In fact, many of those trends (such as housing) have already far surpassed their 2019 levels.

But I don’t foresee a high inflation. The stimulus was truly gigantic, but it was only enough to offset the weakness we would have otherwise experienced. As the economy snaps back strongly in the coming quarters, the current stimulus package will add fuel to the fire in the near term.

However, the cure for high prices is…high prices. And as bottlenecks in housing and other sectors correct themselves, aggregate demand should stabilize as the year progresses even though there will be price pressures in many parts of the economy.

This means inflation is likely to be a risk well into 2022. I suspect it might even be high enough that the Fed will be seriously considering rate hikes by early 2022.

Here’s some historical perspective on how this might look: 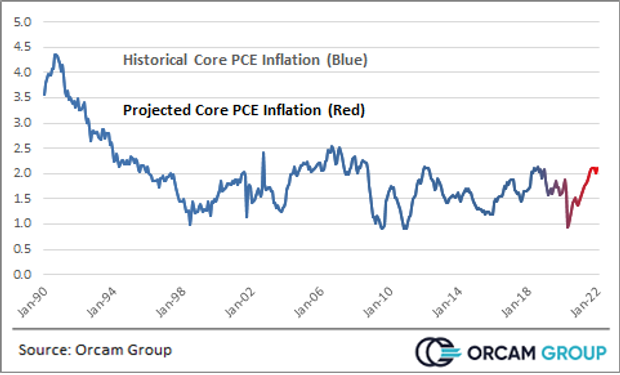 I am much more concerned about inflation now than I was coming out of the GFC. But we should keeps things in some perspective. While there are many near-term tailwinds for the inflation monster there are much stronger structural headwinds.

Yes, the government’s humongous tailwinds will push near-term inflation higher, but this will trail off as time goes on. Further, as I alluded to above, there is a growing concern about the state of the roaring housing market. After all, booms can often lead to busts, and when booms in housing happen (which comprises a substantial component of the U.S. economy) we should all perk up a little.

And while I’ve been a vocal housing bull since 2012, I am increasingly worried that I might sway back to the housing bear that I was from 2005-2012. There are trends in housing that eerily resemble the pre-1991 housing bear market which also led to a recession. But that’s a story for another day.

In sum, the remainder of 2021 is unlikely to be a fun one for bond investors. There is a continued asymmetric risk to the upside that exposes bond investors to unusually poor risk-adjusted returns. But let’s not get carried away. Hyperinflation isn’t coming and the probability of a 1970s style 10%+ inflation remains low.

Cullen Roche is the author of the Pragmatic Capitalism blog, where this column first appeared. Follow him on Twitter @cullenroche.

And: The economy is heating up again and it’s good news for millions of unemployed