Home
Stocks
In One Chart: ‘Excessive stimulus’ puts value stocks on track to outperform growth over next 4 years, says Stifel’s Bannister
Prev Article Next Article
This post was originally published on this site

There isn’t a lot of upside from here for the S&P 500, but value stocks could solidly outpace their growth peers over the next four years as “excessive stimulus” fuels a commodity boom, a veteran Wall Street strategist argued Monday.

“As reflation occurs with excessive fiscal stimulus, rising money supply lifts commodities, a positive for value versus growth as the S&P 500 SPX, -0.17% flattens [around] 3,900,” wrote Barry Bannister, head of institutional equity strategy at Stifel, in a note.

See: How a weaker dollar could help fuel a commodities boom in 2021

He sees room for value to outperform growth by 30% as measured between the fourth quarter of last year through the third quarter of 2024, followed by a “significant” retest of commodity lows in 2025 (see charts below). 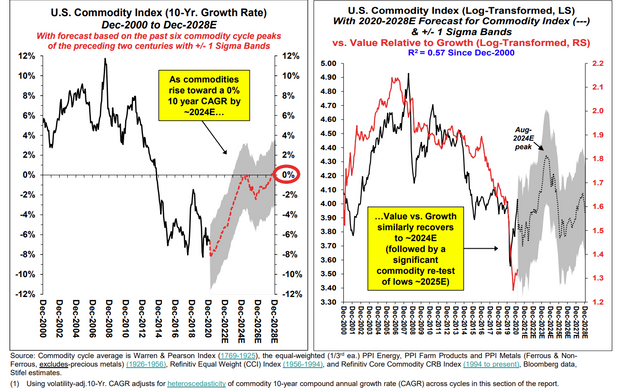 Value investors, who focus on shares of companies viewed as cheap when their prices are compared with metrics like earnings, sales or book value, have been suffering existential angst after more than a decade of underperformance versus growth stocks, or shares of companies that exhibit above average earnings or sales growth.

Bannister has argued that growth-led gains have put the S&P 500 on the verge of a 1999- or 1929-style bubble, with a further surge by growth stocks needed to push equities into equally lofty territory. With commodities booming and growth stocks set to stall, Bannister said he doesn’t expect that to happen.

Bannister argued that elevated valuations were due largely to the Federal Reserve driving down the real, or inflation-adjusted, 10-year Treasury yield, which magnified the S&P 500’s price-to-earnings ratio. Real yields are now back on the rise.

In One Chart: Rising bond yields mean these stock-market sectors have the most to gain — or lose

Meanwhile the Fed’s efforts to hold down yields have resulted in a “misleadingly attractive” equity risk premium, the excess return an investor earns by investing in stocks over a “risk-free” asset like Treasurys. Investors see through that, he argued.

The S&P 500 was down 0.2% Monday, trading near 3,900 after posting a modest loss last week. The Dow Jones Industrial Average DJIA, +0.44% rose around 133 points, or 0.4%, while the tech-heavy Nasdaq Composite COMP, -1.34% dropped 1.4%, with analysts blaming rising Treasury yields for the pressure on tech-related shares.