Home
Stocks
Market Extra: How does the stock market perform after a 1% drop — or worse — to start a year?
Prev Article Next Article
This post was originally published on this site

The stock market kicked off 2021 on the backfoot after briefly flirting with record highs at the start of Monday’s action, amid rising COVID-19 infections and variants of the virus raising worries among investors about the prospects for the global economic recovery.

However, the sharp selling in the stock market shouldn’t to be taken as an omen of what’s ahead for Wall Street after a stellar rebound in 2020, if history is any guide.

The Dow, for example, has registered 18 occasions in which the blue-chip benchmark has declined by at least 1% on the first trading day of the year, and that has resulted only in seven overall declines in January, or almost 40% of that limited sample size. The index also finished down about 40% of the time for the calendar year, Dow Jones Market Data shows. 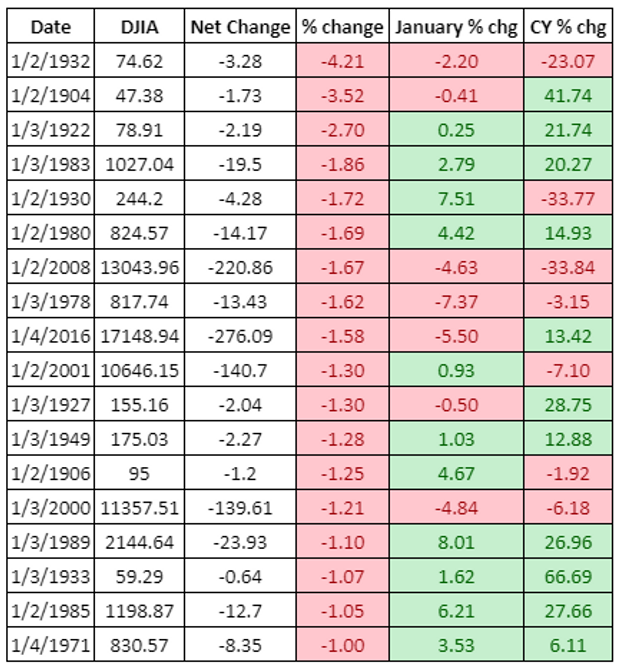 For the S&P 500, meanwhile, of the 12 times that it has fallen by at least 1% to start January, it has declined 42% of the time, or five times, for the rest of the month and the calendar year. 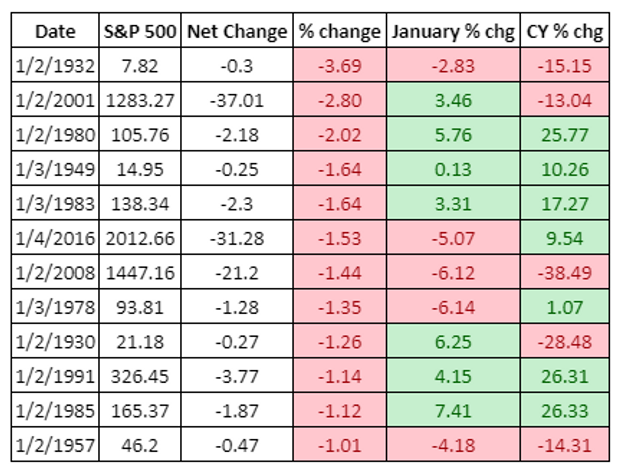 Meanwhile, the Nasdaq Composite has declined 57% of the time, or four of the seven times that it has opened a calendar year with a drop of 1% or more.

The slide for U.S. equities comes as hospitalizations in the U.S. jumped to a record Sunday. Meanwhile, governments across Europe are extending lockdowns, including the U.K., where Prime Minister Boris Johnson said that he will impose a national lockdown until February to try to slow the spread of the viral outbreak.

Meanwhile, investors are anxious about Tuesday’s Georgia runoff races, which will determine whether Republicans are able to hold on to control in the Senate. In recent days, betting markets have shown the Republican lead shrinking, pointing to what will likely be a tight race.

A Democratic victory could boost equities by raising expectations for more aggressive fiscal stimulus measures this year, on top of the billions of dollars deployed already by Congress.

Strategists caution that it is important not to read too much into stock movement so early in a year, particularly one that hinges on the effective response to the worst pandemic in a century.

“The first day doesn’t necessarily set the tone for the rest of the year, though,” wrote Lindsey Bell, chief investment strategist at Ally Invest.