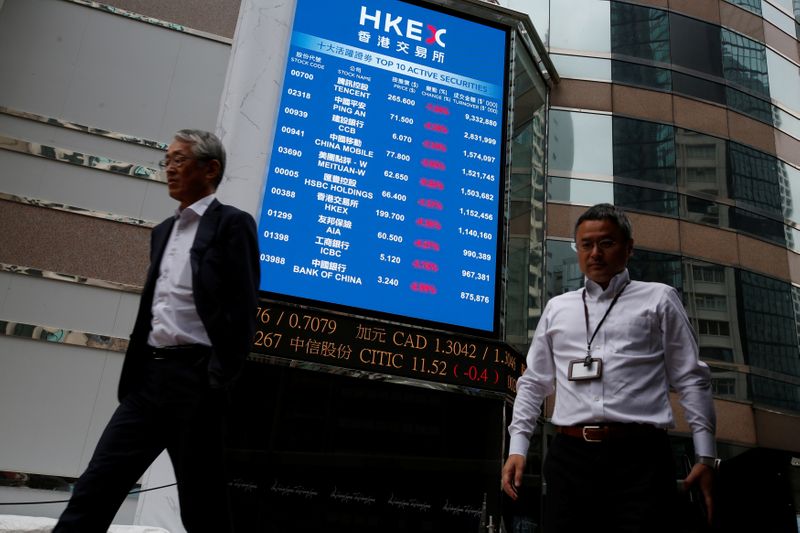 HONG KONG (Reuters) – Massive gains posted by companies at their trading debut in regional stock markets in Asia this year are raising the spectre of a bubble, bankers and brokers said.

A record number of companies in Asia are seeing their valuations double after initial public offerings (IPO) this year, driven by red-hot demand from retail investors making the most of unprecedented market liquidity and lower interest rates.

The huge price pops have taken place across regional stock markets, including in Hong Kong, China, and India, prompting concerns that a “bubble” could be emerging.

“There is too much money in the world competing for the few new stocks that there are,” said Francis Lun, chief executive of Hong Kong retail broker GEO Securities.

“There is a bubble and it will burst … but it probably won’t be yet.”

Governments and central banks globally have unleashed unprecedented fiscal and monetary stimulus to support coronavirus-hit economies this year. But while many economies are still struggling with fresh lockdowns due to a resurgence in cases, the stimulus has helped fuel record activity in international capital markets.

Valuations rose by 100% in 150 of Asia’s IPOs this year, far outpacing the rest of the world where only 57 new deals achieved similar gains, according to Dealogic data.

In Hong Kong, the valuation of 11 firms doubled at their trading debut in 2020, while in mainland China 131 companies saw shares rise by at least 100% on listing day.

The hefty gains in China have been helped by the rules governing China’s STAR Market and Shenzhen’s ChiNext index, which removed the traditional caps on IPO trading limits for the first five days that exist on other mainland markets.

“The Hong Kong pop reflects the overall demand there is for deals, the secondary markets broadly and retail euphoria … we’ve seen it before and if any of these things go the wrong way it will have an impact,” said an equity capital markets banker at a Wall Street firm, who was involved in several IPOs in Hong Kong this year.

Shares in Chinese detergent maker Blue Moon jumped as much as 25% at its Hong Kong debut on Wednesday, the latest IPO in Asia’s financial hub.

Fourace Industries shares surged 230% following its $16 million IPO in September, the biggest rise among Hong Kong listings this year, while shares in Smoore International gained 150% in July after the company raised $1.1 billion at its IPO.

“I’m worried for retail investors … they buy when they see hype,” said a capital markets banker at a European institution, involved in a number of deals in Hong Kong this year.

Elsewhere in Asia, stocks in Burger King India, which runs the franchise of Restaurant Brands International (NYSE:QSR) Inc’s U.S. chain Burger King, jumped nearly 88% at its market debut on Monday, after the company raised about $110 million.