Home
Stocks
Deep Dive: While you’re buying value stocks for your portfolio, add some diversity too
Prev Article Next Article
This post was originally published on this site

The dilemma of the day for many investors is choosing between growth- and value-stock strategies.

Why not pursue both as part of a diversified portfolio?

You might think you are well-diversified with an index fund, but it probably isn’t true.

We spoke with Kimball Brooker, the deputy head of the global value team at First Eagle Investment Management in New York, and Alan Barr, a senior analyst and associate portfolio manager at First Eagle. In an interview, they shared their thoughts about value investing as well as the pros and cons of stock screening. They provided an example, below, of a value stock of a large company with a path for growth.

The S&P 500 Index SPX, +1.29% is tracked by numerous passively managed funds, such as the SPDR S&P 500 ETF SPY, +1.35%, which seek to mirror its performance by holding all 500 stocks in the right proportions. The index is weighted by market capitalization. This is what makes it less diversified than many investors realize.

Apple Inc. AAPL, +5.01% is the largest component, by far, making up 6.7% of the adjusted index’s market cap. The top five companies (including both share classes of Alphabet Inc.’s Class C GOOG, +0.44% and Class A GOOGL, +0.50% shares, placing them together in 4th place above), make up 22.7% of the adjusted index’s value. The top 10 account for 29.5%. That is a high concentration of risk, which has worked out very well in recent years as the largest tech stocks have soared.

An easy way to diversify

The S&P 500 includes both growth and value stocks, but as you can see, the growth camp dominates.

Why not diversify in two ways, by adding exposure to value stocks, as well as stocks listed outside the U.S.? There are many opportunities around the world in growing markets. You can even diversify further with some active management to add variety to a portfolio that probably already includes a passively managed U.S. fund.

Both funds have a value focus with capital preservation as an important goal. Their diversification away from the broad, cap-weighted S&P 500 means they can underperform the U.S. benchmark during a bull market. But see this 30-year chart comparing the First Eagle Global Fund (excluding sales charges) with the S&P 500: 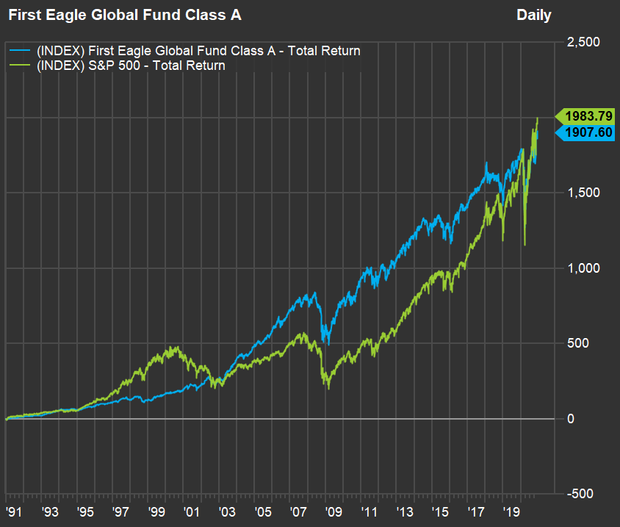 That chart may remind you of the tortoise and the hare. The First Eagle Global Fund’s rise has been steadier.

The S&P 500’s forward price-to-earnings ratio, based on weighted average aggregate estimates among sell-side analysts, has increased to 22.1 from 18.3 at the end of 2019, according to FactSet.

When asked during an interview about how he and colleagues might begin their investment-selection process in an expensive market, Brooker called the idea of screening stocks “seductive,” especially when the stock market is at a high valuation.

“Some people like the idea of things being quantified and having human emotions taken out — a systemization of process that is repeatable,” he said. “But our view is the world is more complex.”

He explained that although First Eagle’s analysts will do some screening by the numbers, the more important part of the process is qualitative analysis of companies’ management teams and whether they are “honorable people.” 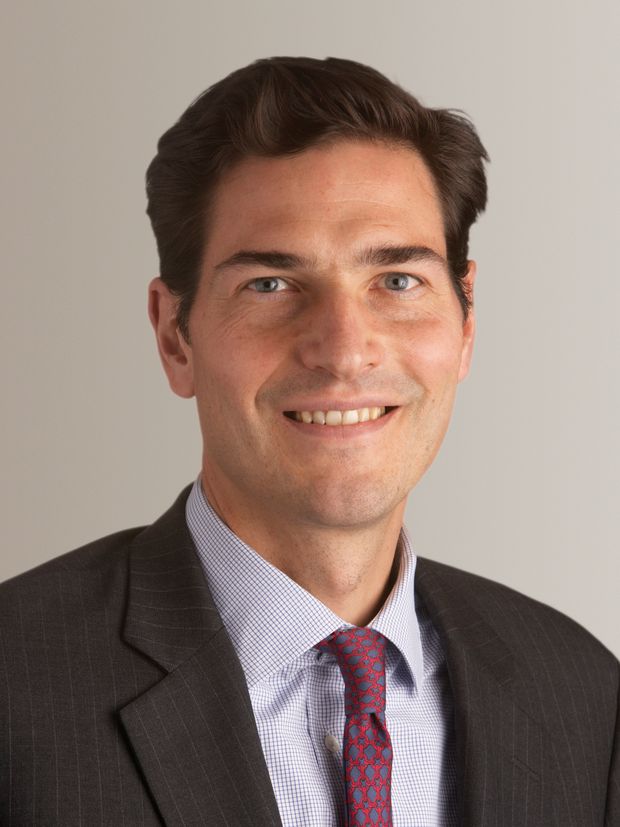 He stressed that quantitative screens will not highlight differences in accounting methods and regulatory or litigation risks.

When asked if General Electric Co.’s GE, +2.59% massive write-offs early in 2018 related to the health-care reinsurance business it exited between 2004 and 2006 might be an example of risk not picked up in a stock screen, Brooker said he and colleagues were “a bit surprised by the accounting.” Still, the firm had decided to avoid GE because “one thing we really try to avoid is complicated companies.”

“You have a limited amount of time. So you are better off veering toward simpler businesses,” he said.

“But this shows the limitation of screens,” Barr said. “There are companies that produce consistent operating margins below that because of the nature of their business. These companies may still produce high returns on capital.” 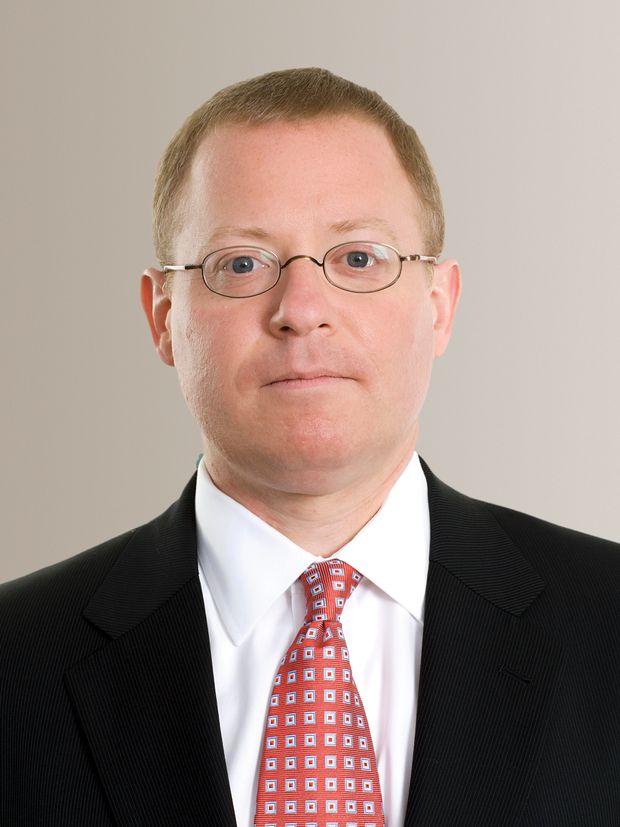 Another factor that Brooker said First Eagle looks for is “a material level of insider ownership.” He stressed that one has to be sure it is a real commitment (ideally founders or members of their families) and not simply the exercise of stock-option awards that may show a temporary increase in an insider’s ownership position.

Brooker named Ambev SA ABEV, +2.65% as an example of a value stock held by both the First Eagle Global Fund and the First Eagle Overseas Fund. The company is based in Sao Paulo and is 61.8% owned by Anheuser-Busch InBev SA BUD, +1.06%.

The ABEV ticker is for Ambev’s American depositary receipts. The advantage of the ADR is that the stock is highly liquid for U.S. investors (as is BUD, for that matter).

Ambev is a dominant producer of beer and non-alcoholic beverages in South America. The company has about a 65% share of the Brazilian beer market, according to Brooker, and also brews and distributes beer in Argentina, Chile, Paraguay, Uruguay, Bolivia, Central America and Canada (under the Labatt’s brand). It brews Skol, Brahma and Antarctica beer and makes Guaraná Antarctica soda in Brazil. It also has an exclusive agreement to bottle and distribute PepsiCo Inc. PEP, +0.37% products in Brazil.

Brooker likes Ambev’s long-term prospects because “Brazil has a large, young population, with a decent trajectory in terms of growth of GDP per capita.”

Here’s how the stock has performed this year, with dividends reinvested. (The dividend yield is 3.28%, according to FatSet): 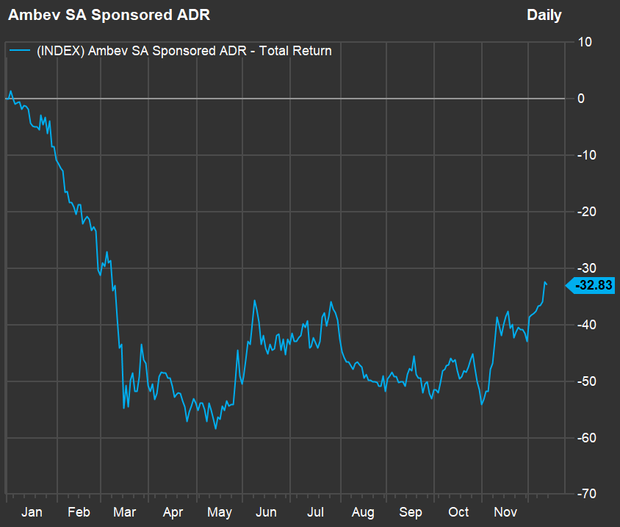 There lies the opportunity. “Ambev was a name we talked about over the years but it never got cheap enough, even during the recession in Brazil,” Brooker said. The COVID-19 pandemic changed that, because consumption of beer in restaurants and bars has suffered — that’s a higher-margin business than selling beer in grocery stores.

“The dominance of this business in Brazil is such that for us it is ready-made because our holding period is so long,” Brooker said. He sees Ambev as a low-risk stock because of the company’s very low debt and “commanding market share in a consumer staple.”

Some value stocks, including Ambev, may be boring, but they can be “reasonable” investments under the right circumstances, while reducing portfolio risk, Brooker said.

The largest holding of the First Eagle Global Fund as of Oct. 31 was gold bullion, which made up 12.9% of the portfolio. Here are the fund’s next nine largest holdings as of that date:

Don’t miss: 20 electric vehicle stocks besides Tesla and Nio that analysts expect to rise the most over the next year