Home
Stocks
In One Chart: Why ‘seriously underloved’ small-cap stocks have room to rise
Prev Article Next Article
This post was originally published on this site 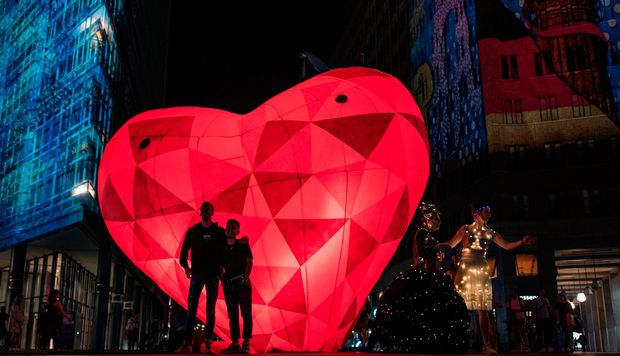 Small hasn’t been beautiful for stock-market investors for quite some time, but that leaves shares of smaller companies plenty of room to run if investors follow through on a rotation away from large-cap tech shares fueled by progress toward a COVID-19 vaccine, analysts said.

“If tech has been a rocket, small-caps have been a submarine. With the exception of the post-corporate tax reform run, and a few other blips, flows have been consistently negative for this group for [around] nine years,” wrote analysts at Jefferies, in a Saturday note that included the chart below tracking equity flows over the last two years. 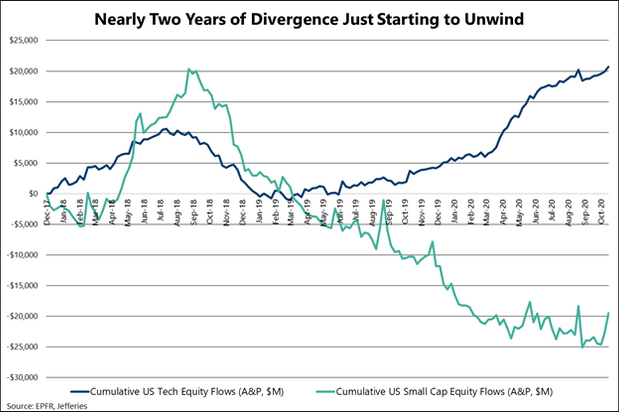 “But maybe a bottom is forming,” they said.

The same pattern was on display Monday, after Moderna Inc. MRNA, +8.12% said its vaccine candidate was more than 94% effective. The Russell 2000 was up more than 2% in late morning trade, versus a 0.8% rise for the Nasdaq, as stocks rallied.

The Jefferies analysts said they’ve long argued that small-caps were poised to “disproportionately benefit” from a full-fledged economic recovery — not only based on fundamentals but also on positioning, given investors’ underexposure to the segment and heavy exposure to tech.

“Small-caps remain pretty seriously underloved, and while it would take an enormous amount of capital just to get back to early ’19 levels, tech has plenty to give,” they wrote.

Cyclical stocks, which are more tied to the economic cycle, also benefited from the idea that vaccine progress offers a light at the end of the pandemic tunnel for the economy, even as COVID-19 cases and deaths continue to rise. The more cyclical Dow Jones Industrial Average DJIA, +1.46% also outperformed last week, rising 4.5%. The S&P 500 SPX, +1.08% rose 2.2% last week, still notching its first record close since Sept. 2 on Friday despite a drag from tech stocks.