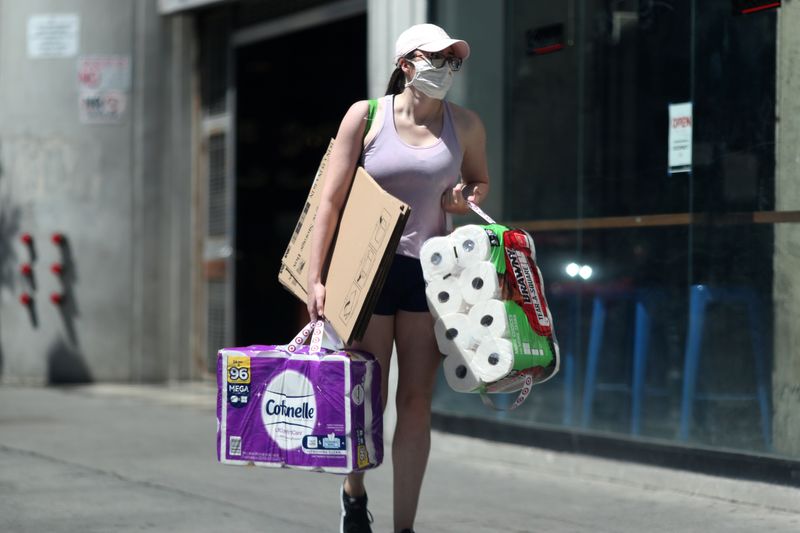 CHICAGO/LISBON (Reuters) – When rumors first began to circulate that the UK would go back into lockdown, Leanne Barnes despaired as bread and toilet roll flew off the shelves again at her local supermarket. But to her surprise, shelves were back to being fully stocked within a few days.

Barnes stocked her pantry last time around with a few additional comfort foods – macaroni cheese, ravioli, soup and spaghetti. But as of last week, she said she felt no urge to stockpile goods.

So far, consumers haven’t returned to the sort of panic buying frenzy that sent packaged-food manufacturers scrambling earlier this year.

At the same time, major food companies – including Campbell Soup (N:CPB), Kraft Heinz (O:KHC) and McCormick & Co (N:MKC) – told Reuters or have said publicly that they have taken measures like changing their production, packaging or pricing so retailers can keep shelves stocked.

Their steps include expanding manufacturing, hiring more workers, re-routing products from restaurants to grocery stores, and turning to bigger pack sizes. Many of their moves came at a high financial cost.

Consumers are more likely to hold back from stockpiling goods – even with significant price-promotions on offer – because the economy is weak and they want to conserve financial resources, according to Benny Mantin, director of the Luxembourg Centre of Logistics and Supply Chain Management.

A Reuters analysis of a basket of goods shows shoppers are buying far less in the United States and Europe than they did earlier this year at the start of the first round of lockdowns.

Yet for consumer companies, the financial consequences of quickly ramping up production have been severe.

Beyond Meat’s (O:BYND) third-quarter sales growth slowed and the company on Monday posted a $19.3 million net loss, partly due to higher expenses from retooling its supply chain to meet grocery demand earlier this year, and what it described as less “retail stockpiling” during the quarter.

Spice maker McCormick’s costs have shot up in the last two quarters and are expected by Refinitiv to rise even more in the current one.

“I’d say that today, our supply chain is so much more resilient than it was at the beginning of the year,” McCormick’s Chief Executive Lawrence Kurzius told Reuters in October.

Kurzius said the company has had to de-prioritize products like some gluten-free spices in favor of popular comfort ingredients like pumpkin-pie spice and taco seasoning. “I’m not trying to tempt fate by saying that, but I think McCormick, as well as our industry as a whole, is in a much better place.”

Next month, Prego pasta sauce owner Campbell Soup is expected to report an increase in operating expenses, its first in five quarters, according to Refinitiv. Campbell – which has sacrificed some products to focus on more popular ones, such as chicken or tomato soup – spent more on sanitation and labor in its most recent quarter and invested $40 million in a new Goldfish cracker plant in September.

Campbell CEO Mark Clouse told Reuters the company has upped outsourcing of production of soup and some snacks to third-party manufacturers – or “co-packers” – to meet any unexpected demand quickly.

“There will be enough soup for the winter,” he said. “You’ll see a shelf that feels fuller than what you might have seen back in March as we’ve worked closely with retailers to make sure we get assortments right.”

Other companies grappling with higher manufacturing costs include Procter & Gamble (N:PG), which has been making Charmin products at record levels this year and has hired more workers to keep lines running 24/7.

Rival Kimberly-Clark (N:KMB), the world’s biggest toilet paper maker, is also seeing higher manufacturing and distribution costs, while Clorox (N:CLX) said this month that it is “investing significantly” in third-party suppliers and getting products to retailers faster.

“Affordability is a rising concern, which should be a benefit to those companies that are fast to adapt,” said Miguel Patricio, CEO of Kraft Heinz which is seeing more demand for 12-pack Mac & Cheese and bigger bottles of ketchup.

Patricio told Reuters Kraft Heinz has increased U.S. third-party manufacturing by 20%, and its own production by 20-25%. Kellogg (NYSE:K) said the company has plans to invest in “significant capacity” as it enters 2021.