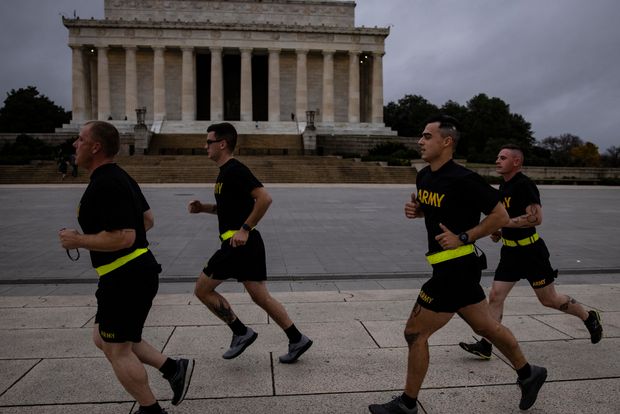 Those serving our country are struggling to access student-loan forgiveness promised to them by the government, new evidence suggests.

A sobering figure for Veteran’s Day: Roughly 200,000 service members owe nearly $3 billion in student loans and yet, just 17,534 have officially begun the process of having their loans discharged under the Public Service Loan Forgiveness program, according to data released Wednesday by the Student Loan Borrower Protection Center, an advocacy group.

The program, which has been around since 2007, allows borrowers working in public service to have their federal student loans forgiven after ten years of payments. The best way for borrowers to ensure they’re on track for forgiveness is to file a document, known as an Employment Certification Form, which allows the government and the contractors it hires to manage the student-loan program to verify that they’re in qualifying employment.

The SBPC report, which is based on an open records request, reveals that a small fraction — the 17,534 borrowers account for nearly 9% of military borrowers overall — have filled out these forms. What’s more, nearly one-quarter of those ECF forms have been denied, an “outlandish” rate “for borrowers who were performing the quintessential public service,” said Seth Frotman, the executive director of SBPC.

“What we have seen time and time again is unfortunately military families are often the canary in the coal mine when markets are broken, or programs break down — they bear the brunt,” Frotman said. Indeed, student-loan servicers have been accused in the past of  denying service members an interest rate cap on their loans to which they were entitled during their military service.

The challenges service members face accessing PSLF mirror broader obstacles public servants of all types have faced accessing the program. In order to qualify, borrowers need to have the right type of federal student loan, be working for a qualified employer, repaying under an eligible repayment plan and have the right number of payments.

Borrowers largely navigate these requirements through their student-loan servicers, the companies the government hires to manage the student loan program; any wrong information can derail their progress towards forgiveness. Borrowers have accused servicers both in lawsuits and elsewhere of providing wrong or not enough information about the program.

In 2017, the first year borrowers were eligible to have their loans forgiven under the program, roughly 99% who applied were denied. The acceptance rate has ticked up as the program requirements become better understood and borrowers are increasingly likely to have the type of federal student loan that qualifies, but it’s still relatively low at nearly 3%, according to data released in September by the Department of Education.

Service members face particular hurdles to navigating the student-loan program. For example, the SBPC found that roughly 10,000 service members are in military deferment, a status that allows them to pause payment on their loans during certain periods of service, but does not allow them to accrue credit towards PSLF. That’s despite the availability of income-driven repayment plans, which allow borrowers to repay their loans as a percentage of their income — in some cases the payments can be as low as $0 — and build credit towards PSLF.

“Having been the lowest-level soldier that there is, it’s really a 24/7 job, you are at the mercy of whatever they tell you do, whenever they tell you to do it,” said Mike Saunders, the director of military and consumer protection at Veterans Education Success. “If it takes hours on the phone with your student-loan servicer, getting enrolled in income driven repayment, you don’t have that.”

Though service members face unique challenges, they also have unique protections under the Higher Education Act. The HEROES Act signed into law in 2003, grants the Secretary of Education the authority to “waive or modify any requirement or regulation,” related to federal student-aid programs for certain borrowers, including those serving on active duty in the military.

SBPC is urging the Secretary of Education to use that authority waive the administrative requirements for applying for PSLF for borrowers who served on active duty for at least 10 years. That would allow for immediate, retroactive loan forgiveness for these borrowers.

“What we really want to do is get back to the basic notion, which was this promise the government made to public servants across the country and in particular military borrowers — that if you gave back to your country for 10 years,” your loans would be forgiven, Frotman said.

Any Secretary of Education could take up this suggestion, but Frotman, who worked at the CFPB under the Obama administration — first as senior advisor to Holly Petraeus, assistant director for service member affairs and as the student-loan ombudsman — said that the idea fits with a Biden administration, which has campaigned on prioritizing issues important to military families and first responders.

“This really articulates something that I think is well within the vision of government they’re trying to lay out,” Frotman said of the suggestion.