Home
Stocks
Dispatches from a Pandemic: Prepare for a ‘marathon’ and two years of wearing masks to battle COVID-19, says prominent Spanish virologist
Prev Article Next Article
This post was originally published on this site 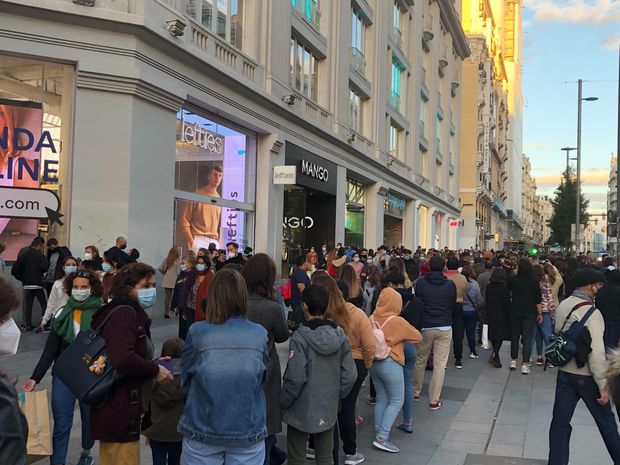 A line snakes down Gran Via avenue in Madrid in front of Primark on Oct. 3, 2020.

The first full day of new coronavirus restrictions in Madrid looked like business as usual for the city’s famed Gran Vía shopping avenue.

But with the advent of a 50% capacity limit on shops, bars and restaurants, a familiar sight had returned on a chilly Saturday afternoon. Reminiscent of a few months ago when Spain was just emerging from a strict lockdown, a line of shoppers snaked outside retailer Zara ITX, -1.22% and an even bigger one stretched down the street in front of Primark ABF, -0.02%.

And even though masks are worn everywhere, all the time now, that 1.5 meter social-distancing measure appears long gone, at a time when Madrid seems to need it most of all.

One has to wonder if this is what warring Spanish politicians had in mind with new rules that kicked in last Friday evening, as the more than 6 million residents of the Madrid region find themselves once again at the epicenter of Europe’s second big coronavirus outbreak.

While cases climb, but thankfully causing fewer deaths this time, Madrid’s right-wing premier Isabel Díaz Ayuso has been fighting Prime Minister Pedro Sánchez’s leftist coalition government on how to control the virus. On Sunday, a group of 55 Spanish scientific organizations representing 170,000 health professionals published a manifesto in every newspaper, demanding that they stop and focus on the crisis.

According to the European Centre for Disease Prevention and Control, Spain’s 14-day cumulative number of COVID-19 cases per 100,000 stands at 319.3. Only the Czech Republic is a close second. But it isn’t like scientists, doctors and residents aren’t screaming “Do something!”

“In the name of more than 47 million Spaniards, yourselves and your families included, you must change now so much political, professional and human inconsistency,” said the manifesto, which has gained over 31,000 signatures on Change.org

Other measures now being enacted include limiting gatherings indoor and outdoor to six people and shutting businesses at 10 p.m., with bars and restaurants closing at 11 p.m. Ayuso has argued the measures will ruin an already devastated economy.

What a weary Madrid population wants to know is will any of this be enough. According to one prominent virologist and immunologist who spoke to MarketWatch last week before the measures kicked in, far more must be done.

Margarita del Val heads up a cross-disciplinary initiative by the Spanish National Research Council (CSIC) — Salud Global/Global Health. She has been urging the entire region be restricted — 45 municipalities had been before the latest moves, which led to accusations of punishing the poor due to the locations of the most heavily affected areas.

Del Val said Madrid needs better quarantine control and contact tracing, and that it lacks the health-care officials to do this. The government recently announced that police would be able to access health department data to help enforce quarantines on individuals, while the Spanish army was drafted in August to help with contact tracing in parts of the country.

Del Val also zeroed in on heavily congested public transport — social media is filled with complaints about crowded buses and trains, specifically in areas that are seeing sharp rises in cases.

“Public transportation has to be safer and making it safer means having more trains and buses…so that they are not so full. Also trying to have start times — at different companies at different times, so that we don’t have the rush hour, which is highly concentrated,” she said.

As well, del Val said people living in the most highly affected areas of Madrid need to be supplied with clean masks each time they enter the metro. “Some people cannot buy surgical masks everyday and they’re using the low quality masks and they are not so effective for them or for others,” she said.

She also urged hotels to reopen for people with symptoms, to prevent workers living in cramped conditions from spreading the virus. A network of hotels opened up in the first wave of the pandemic, and those establishments are underused now that summer has ended, said del Val.

Restaurants remain a big concern for del Val, especially as the warm weather leaves, and she predicts a “huge problem” with indoor drinking and eating, even with capacity cuts to 50%. Summer outdoor dining was also problematic, she said.

“I think when people were eating and drinking outside, which was taking one measure, open air, which is good, they were forgetting a second measure…either distance or masks,” or limited contact, she said.

Spain also had a problem with “national tourism” in the summer that brought too many people together, often families, who didn’t keep safe distances when they should have. Going forward, she said, theaters, which offer decent venting and where individuals wear masks and speak little, may have an edge over restaurants. 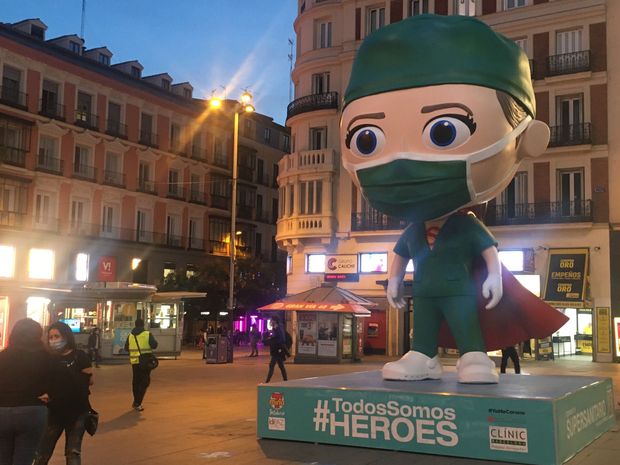 “We are all heroes,” reads a statue dedicated to health-care workers in Madrid’s Plaza del Callao, Oct. 1, 2020.

In the end, said del Val, no one can count on one single measure, but lifestyle changes will be required. “We have to get used to wearing a mask and taking a couple of measures for a couple of years, and integrate them into our daily lives, forget about them, they will turn into something that is useful to you,” she said.