Home
Stocks
: Riding a wave of low interest rates, mortgage lenders rush to take their companies public
Prev Article Next Article
This post was originally published on this site 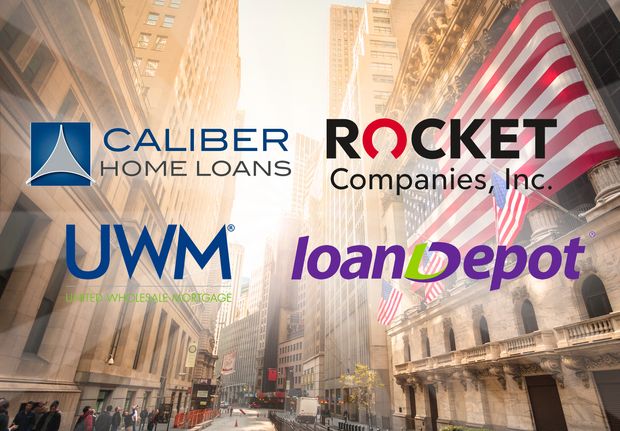 Multiple mortgage lenders are going public in the hopes of gaining access to more capital to fund new loans.

Record-low interest rates have provided a major boost to mortgage lenders’ business. And now, several of them are looking to capitalize on the low-rate environment — quite literally.

Caliber Home Loans filed for an initial public offering on Friday — the company is set to trade on the New York Stock Exchange under the ticker “HOMS.” The proceeds of the offering will go to the selling stockholder, LSF Pickens Holdings, which is a unit of private-equity fund manager Lone Star. (Caliber’s CEO Sanjiv Das is a frequent opinion contributor to MarketWatch.)

Separately, United Wholesale Mortgage announced it would go public last week through a merger with Gores Holding IV Inc. GHIV, -1.08%, a special purpose acquisition corporation. “We chose to go through a SPAC because we think it is a more efficient way to go public and we looked at both options,” United Wholesale President and CEO Mat Ishbia said in a statement to MarketWatch, adding that the company appreciated the expertise of the team at Gores in taking companies public.

Another lender, loanDepot, is reportedly reviving its IPO plans after having abandoned them a few years ago.

In going public, the mortgage companies are following Quicken Loans’ lead. In early August, Quicken Loans’ parent company, Rocket Cos. RKT, -3.17%, went public, selling 100 million shares at a lower-than-expected $18 a share. The company’s stock subsequently popped, but has ebbed and flowed in the subsequent weeks. The stock is now trading around 6% above its original IPO price.

Many of the companies going public are among the largest mortgage lenders in the country. Quicken is the nation’s top mortgage lender as of 2019, according to data from the Consumer Financial Protection Bureau, followed by United Wholesale. Caliber and loanDepot also feature in the top 10, alongside traditional banks like Wells Fargo WFC, +1.39% and Bank of America BAC, +1.71%.

It’s not just the biggest players that are taking their companies public, though. Slightly smaller lenders and mortgage firms are also getting in on the act, including AmeriHome Mortgage Co. and Guild Mortgage, which have both announced IPO plans recently.

When it went public, Quicken executives attributed the decision to a desire to reward employees with stock options in order to compete with Silicon Valley firms for talent. “That may be fairly common in Silicon Valley, but it’s not that common in Detroit,” Rocket Cos. president and chief operating officer Bob Walters told MarketWatch following the company’s IPO.

But there’s another broader rationale behind the wave of lenders taking their companies public, industry observers say. “It’s driven by the Fed and interest rates,” said Chris Whalen, banking analyst and chairman of Whalen Global Advisors.

The mortgage industry is expected to originate more than $3.1 trillion in mortgage loans in 2020, according to the Mortgage Bankers Association’s most recent forecast. If that forecast proves accurate, that would represent a 45% increase from last year and the highest origination volume in many years — all because of the renewed demand caused by the low-rate environment.

While the bulk of the new loans are refinances, mortgages used to purchase homes are also up as prospective home buyers rush to take advantage of the low rates on offer. “The market is full of good loans that don’t have any problems,” Whalen said.

Another factor that makes the timing ripe for going public is the troubles REITs have had amid the coronavirus pandemic, Whalen said. These companies can give investors another option to capitalize on the real-estate market. “All of the hybrid REITs have collapsed,” Whalen said. “They’re kind of taking the place of the REITs in a funny way.”

Going public solves a big problem a lot of these companies have: access to capital. Unlike traditional banks, which can use the money coming in through deposits to fund new loans, these lenders have to rely on other sources. “The non-banks are always challenged to be able to raise the capital they need for operations and for the loans themselves,” said Rick Sharga, a mortgage industry veteran and executive vice president at real-estate data firm RealtyTrac. “It takes them from the minor leagues to the major leagues.”

Beyond the money raised by selling stock, going public also opens up greater access to selling debt — and even potentially higher valuations on their existing debt.

How the companies fare on the open market will largely depend on the direction of interest rates. If rates rise — or even if they stay at their current levels — origination volumes tend to go down. “At some point you’ve exhausted the universe of borrowers who can benefit, and then it gets difficult for them to do the kind of business they’re doing today,” Sharga said.

The precise effects could be more pronounced with certain companies. While all of the companies are mortgage lenders, they operate in different parts of the market. The bulk of Quicken’s business comes via refis, while Caliber focuses primarily on purchase loans.

But mortgage rates could drop even further — particularly given that the Federal Reserve has signaled it doesn’t expect to hike rates for many years. If that’s the case, then the current IPO wave could last longer than some currently expect, Whalen said.

“This opportunity’s not going to go away,” he said.