Home
Stocks
: McConnell offers few signals on timing for vote on Supreme Court pick
Prev Article Next Article
This post was originally published on this site 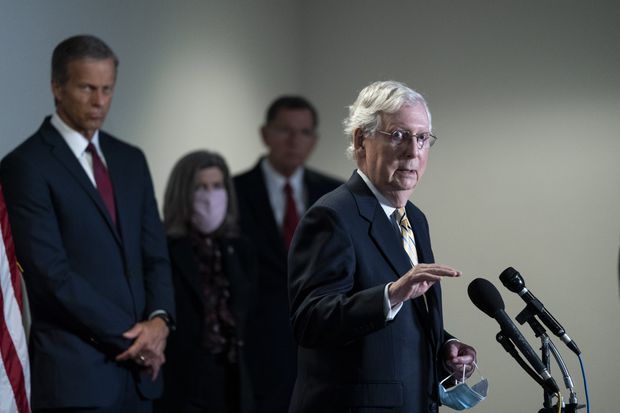 Senate Republicans know they want a vote on the person President Donald Trump picks to be the next U.S. Supreme Court justice. They’re still not sure when that vote should happen, though.

Senate Majority Leader Mitch McConnell declined Tuesday to give a sense of whether a vote would happen before or after the Nov. 3 elections. He made the comments after a weekly lunch gathering of Republican senators.

“The next step will be for Chairman (Lindsey) Graham to lay out the way to handle this in committee. And when the nomination comes out of committee, then I’ll decide when and how to proceed,” McConnell said, referring to the Senate Judiciary Committee.

President Donald Trump has yet to name a pick to replace Justice Ruth Bader Ginsburg but has said it will be a woman. Ginsburg’s body is to lie in state on the House side of the U.S. Capitol on Friday and Trump is expected to name his choice as early as Saturday.

Democrats have cried foul at the prospect of the Senate confirming a pick so close to the election after Republicans held up a nominee of President Barack Obama’s in early 2016. But with only two Republican senators publicly opposing a vote and their colleagues united in favor, at least ahead of the actual pick, the remaining question has become when a vote would take place.

Sen. John Thune, a South Dakota Republican who serves as the second-ranking party leader, told a group of reporters after the lunch there was no consensus on timing.

“There are different points of view about that,” he said. “It’s not anything that has  been decided, I think it’s going to be really dependent upon how the process moves.”

He also said if the nominee is named Saturday, that would give the Senate five weeks to consider, “which would be sufficient time, following normal protocol.”

Sen. Mitt Romney, a Utah Republican who announced he supported a vote, told reporters “whether it’s before or after the election, we’ll learn as time goes on.”

See also: ‘The only Republican with morals is a former Republican’ — Mitt Romney gets full Twitter treatment

Democrats continued to protest the idea of voting on a nominee before the next president is seated. In a sign of potential procedural moves to come, Senate Democratic Leader Chuck Schumer objected to a normally noncontroversial standing request to allow Senate committees to meet within a time window around the Senate floor opening.

“We invoked the two-hour rule because we can’t have business as usual when Republicans are destroying the institution, as they have,” he said.

That drew a rebuke from Sen. Susan Collins, the Maine Republican who is one of the two Republicans opposing a vote and who is considered to be in one of the toughest re-election races. Collins said Schumer had complained about the lack of election security intelligence briefings but his action had blocked an Intelligence Committee hearing on that issue from happening.

“That is a major story in itself and it’s outrageous. I am stunned that he is doing that,” she said.