Home
Stocks
Market Extra: Corporate bond issuance off to a bang in September
Prev Article Next Article
This post was originally published on this site 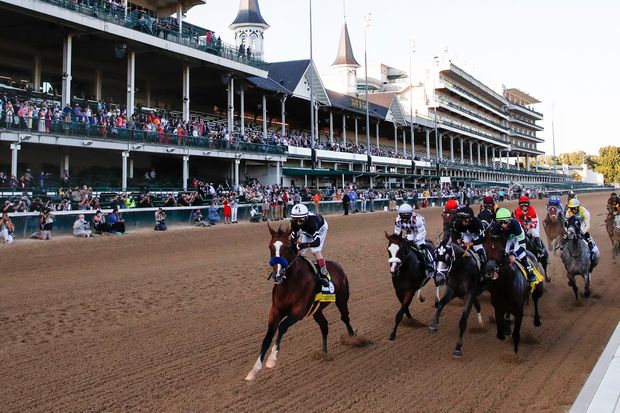 Corporate borrowing is off to the races.

Companies wasted no time going back to the borrowing trough after the long Labor Day weekend.

U.S. investment-grade companies already borrowed $46.7 billion in the bond market this month through Wednesday, a single day that accounted for $21.3 billion of the total, according to BofA Global Research.

Notable among the week’s deluge was a debut $1 billion green bond issued by JP Morgan Chase & Co. JPM, -1.03%, putting it alongside other major corporations from Google parent Alphabet GOOG, -1.60% GOOGL, -1.36% to Visa Inc. V, -1.23%, which in recent weeks have raced to borrow with do-good purposes.

September often can be a busy month for corporate borrowing, as companies focus on the remaining weeks left in the year to lock in optimal financing — meaning before Thanksgiving, when the typical year-end lull begins to take hold.

Here’s a look at how September bond issuance stacked up over the past five years: 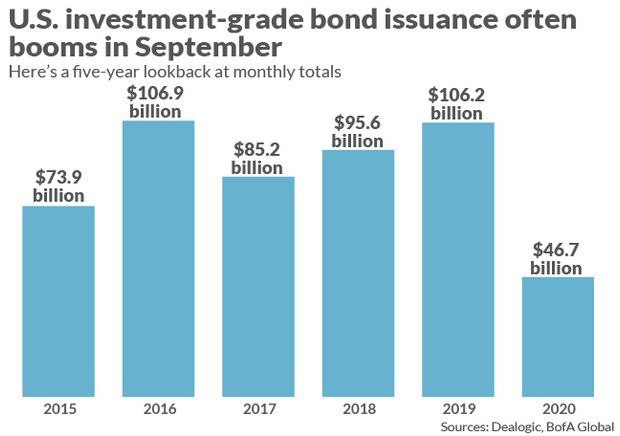 The pandemic has made this year anything but typical, including with a record $1.5 trillion already borrowed by investment-grade companies so far in 2020 to help fund their operations through the year’s end.

Many highly rated businesses borrowed fresh mounds of debt at lower rates than ever before, even though they are now carrying record levels of leverage.

However, with the Federal Reserve’s unprecedented pandemic support, there’s little reason to think big businesses have had enough of today’s ultra-low borrowing rates.

“It’s a very busy September,” said Wendy Wyatt, a portfolio manager at DuPont Capital, of investment-grade bond supply. While she doesn’t expect to see the same eye-popping borrowing boom as in March, April and May, when companies were panic-borrowing, Wyatt has been encouraged by the recent trend where bond issuance has been used by more companies to kick their debts down the road or to repay near-term maturities.

“It’s not hideous. It’s a smart business decision,” she said of the debt replacement or reduction strategy, even through she’s also keeping an eye on companies that look to take on more debt to fund mergers and acquisitions.

“M&A has picked up and you’ve got to be cautious about that,” she said.

Related: Coronavirus slashes deal-making globally: What to expect next

To be sure, some of the big winners of the pandemic debt boom have been investment banks hired to arrange the funding.

Revenue at investment banks jumped 32% to $101.6 billion in the year’s first half from a year prior, its highest level since the first half of 2012, according to Coalition, a global analytics company.

What’s more, Coalition expects the year’s swift uptick in investment banking business, particularly in fixed-income, currencies and commodities, to combine with further head-count reductions at banks and produce an 12% return on equity for institutions it tracks in its index.

That would mark a significant reversal of a trend where ROE for banks in the index have declined each year since 2016, when it hit 9.5%.