Home
Stocks
London Markets: FTSE 100 climbs, but travel stocks and restaurants drop on worries over new COVID-19 clampdown
Prev Article Next Article
This post was originally published on this site 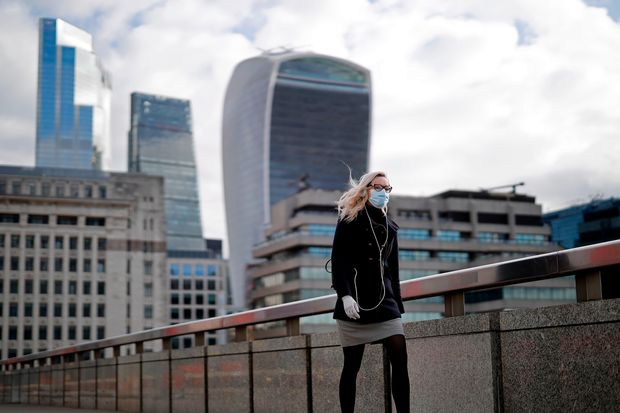 A woman wearing a face mask as a precautionary measure against COVID-19, walks across London Bridge away from the City of London, England, on May 13, 2020.

The FTSE 100 was in the black on Wednesday, helped by gains for major oil companies and a weak pound, but travel and restaurant stocks were under pressure ahead of pending measures by the government to fight a rise in coronavirus cases.

The main index UKX, +1.34% rose 0.9% to 5,989, following a modest decline on Tuesday. The pound GBPUSD, +0.18% tumbled 0.7% against the dollar, after reports the government will tweak the European Union Withdrawal Agreement, a move that could break international law.

“The prospect of the U.K. ending the transition period without a deal in place and operating on WTO [World Trade Organization] terms from January hurt the pound,” said David Madden, market analyst at CMC Markets U.K., in a note to clients. “The ‘no-deal’ phrase is likely to be circulating around the news wires in the near-term, and unless progress is made with respect to a deal, the pound is likely to remain under pressure.”

The weak pound was a boost for the FTSE 100, as it makes goods of those companies who earn revenue overseas more competitive. A weak pound was also behind a Barclays upgrade for the U.K. stock index. Analysts turned overweight on U.K. exporters.

On the downside, shares of AstraZeneca AZN, -1.50% fell 0.8% after the drugmaker paused late-stage trials of its COVID-19 vaccine candidate that it is developing with the University of Oxford, after one patient became ill, possibly a reaction to the treatment.

In a statement, the company explained it was a “routine action which has to happen whenever there is a potentially unexplained illness in one of the trials, while it is investigated, ensuring we maintain the integrity of the trials.” Citi analysts said they would need more information before coming to any conclusions about the latest development.

Investors were keeping an eye out for a news conference with Prime Minister Boris Johnson later, who is expected to lay out new restrictions to help contain a growing wave of COVID-19 cases. Among the measures are a rule that will ban more than six people gathering in a social setting at one time.

“The fact that the likes of JD Wetherspoon JDW, -8.41%, easyJet EZJ, -3.28%, and Cineworld CINE, -6.94% are leading the FTSE 250 declines does highlight the fact that further growth in U.K. COVID cases will likely lead to restrictions on travel and social interactions,” said Joshua Mahony, senior market analyst at IG, in a note to clients.

“From an airline perspective, the fear is that it will soon be a case of other nations imposing quarantines on the U.K. as the shoe is placed on the other foot,” he said.