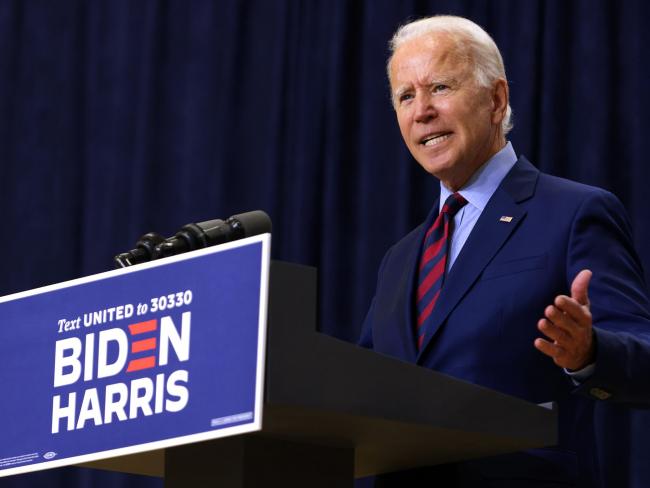 Biden, who is launching a renewed focus on economic issues with a speech in Michigan on Wednesday, also will promise to reverse Trump administration policies that his campaign said amount to “loopholes” that allow offshoring to take place.

The former vice president will also pledge to take executive action during his first week in office to direct the federal government to buy American goods and support American supply chains in their procurement processes, his campaign said.

Biden’s proposals echo President Donald Trump’s 2016 campaign push to focus on reviving manufacturing in the U.S. and creating more U.S. jobs. Trump’s 2017 tax law was his signature legislative achievement. But the economic strength he planned to run on for re-election collapsed tn the spring when the coronavirus began to cause shutdowns across the country.

The policies are part of a broader economic push from Biden in a crucial battleground state as polls show voters about evenly split on which candidate, Biden or Trump, they trust more to manage the economy. Until recently, Trump had a reliable lead on only that issue. But the coronavirus pandemic brought job losses and manufacturing contraction that cut into that lead.

Biden’s proposal to target offshore profits adds to a previously announced plan to require corporations to pay a minimum 15% tax on their domestic profits. The combination would greatly inhibit companies’ ability to shift income and tax breaks between countries to avoid paying levies in the U.S. and abroad.

Biden will also say, according to his campaign, that Trump has broken his promises to bring jobs and profits back to the U.S.

“Offshoring, outsourcing, Buy American. These are areas where Donald Trump’s record has not been remotely matched by the reality,” senior policy adviser Jake Sullivan said in an interview ahead of the announcement.

Biden will propose a 28% corporate tax rate plus a 10% penalty surtax on the profits from any production by a U.S. company overseas for sale on American soil, making the overall tax rate on those profits 30.8%. The penalty will also apply to call centers and services that a U.S. company locates overseas but that serve the U.S.

He also plans to implement what his campaign described as “strong anti-inversion regulations and penalties,” though it did not detail those plans. He will also “deny all deductions and expensing writeoffs for moving jobs or production overseas” for jobs that could “plausibly” be done by American workers.

The surcharge is an attempt to “prevent firms from tax rate shopping,” said Carl Tannenbaum, chief economist at Northern Trust (NASDAQ:NTRS) and a former official at the Chicago Federal Reserve. “He’s trying to close the doors to multinationals that are flexible enough to move operations to other jurisdictions.”

Tannenbaum points out that these changes would require congressional action and its success would depend on Democrats winning a filibuster proof majority in the Senate in November.

Biden is also proposing a 10% “Made in America” tax credit for companies that create jobs for American workers and accelerate the U.S. economic recovery. It will be available for revitalizing closed or nearly closed facilities, retooling or expanding facilities, and bringing production or service jobs back to the U.S. and creating U.S. jobs. It will also apply when a company is increasing manufacturing wages above the pre-Covid baseline for jobs paying up to $100,000.

The Trump campaign has also proposed a “Made in America” tax credit in addition to tax credits for companies that bring back jobs from China, but he has provided no details on how that would work. Trump’s 2017 tax law included a tax deduction for corporations that manufacture in the U.S. and sell overseas, but the incentive has largely failed to spur new domestic production.

Biden’s plan would also end what his campaign describes as three “Trump offshoring loopholes” that were part of the 2017 tax law: allowing U.S. companies that locate production or call centers overseas to pay no taxes on the first 10% of profit, permitting companies to combine strategies to move profits overseas and park profits in tax havens to avoid paying all U.S. taxes, and applying taxes at just half the rate a U.S. company would pay for activities in the U.S.

Biden would double the Trump tax rate to a minimum tax of 21% on all foreign earnings of U.S. companies overseas. He would also end the use of tax haven strategies by applying the minimum tax to each foreign country separately.

Biden’s executive actions would use The Defense Production Act and the Federal Property and Administrative Services Act of 1949 to enforce Buy American rules. Among other measures, he would also crack down on companies that label products as Made in America if they’re coming from China or elsewhere and create a Made in America office within the White House Office of Management and Budget to ensure that the government complies with Buy American rules.

Trump is holding an airport rally in Saginaw, Michigan on Thursday. Michigan is a must-win state for both candidates, after Trump won the state by 11,000 votes over Hillary Clinton in 2016.

Michigan’s unemployment rate was 8.7% in July, down more than 6 percentage points from the previous month, as it economy begins to reopen after strict virus lockdowns.