Home
Market
Ford's incoming CEO wants the U.S. automaker to run like a Deere
Prev Article Next Article
This post was originally published on this sitehttps://i-invdn-com.akamaized.net/trkd-images/LYNXMPEG871DP_L.jpg 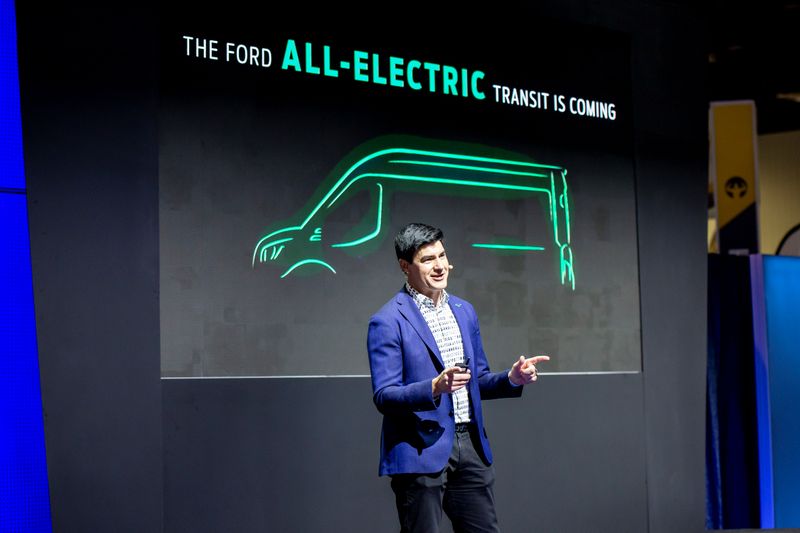 DETROIT (Reuters) – From the moment he was named chief operating officer and heir apparent to the top spot at Ford Motor (NYSE:F) Co in February, Jim Farley has touted the growth potential of its commercial vehicles.

But it’s not just more trucks and vans that Farley wants to sell. As Farley prepares to takes over as chief executive on Oct. 1, he is betting Ford can transform its commercial vehicle business to generate recurring revenue through sales of services that take advantage of the software, data and connectivity in its F-Series pickup truck and Transit vans.

“Think of it as a second F-150,” Farley told Reuters, referring to the U.S. automaker’s lucrative full-size truck business that generates $50 billion in annual revenue. “We have the F-150 everyone loves. There’s this other business out here that’s huge.”

“Think of the data being more powerful than the fuel economy of the vehicle,” he added.

Automakers like Ford have talked for a long time about generating post-sale revenue from connected vehicles, but they have struggled to deliver. As a result, Ford has been abandoned by growth-oriented investors, despite its lucrative F-series franchise.

Ford now is trying to show it can grow, and build a competitive moat around its commercial vehicle business before electric car leader Tesla (NASDAQ:TSLA) Inc, other startups and larger technology players like Amazon.com Inc (NASDAQ:AMZN) enter those markets.

The U.S. market alone last year accounted for more than $58 billion in sales of commercial trucks and vans, everything from Class-1 regular pickups to Class-7 heavy-duty trucks like the Ford F-750, according to ACT Research.

At Deere, Purdy led efforts to deliver artificial intelligence (AI) on the farm through smart equipment and founded John Deere Labs to help build a “sticky” relationship with customers. Deere’s aftermarket parts and services business accounted for about 15% to 20% of $35 billion in sales last year.

In his first interview since his May hiring to lead Ford’s commercial vehicle connectivity business, Purdy said he “helped transition an industrial goods business that thought about metal bending into a service business.”

Among the products developed by Deere while Purdy worked there were the ExactEmerge planter that offers improved seed spacing at higher speeds, freeing up workers for other jobs; and the See and Spray distribution system that will use smart cameras to distinguish between healthy and unhealthy crops, allowing for reduced use of herbicides when it’s introduced next year.

Purdy, a 35-year-old former investment banker and consultant, grew up on a farm in Okotoks, outside Calgary, Canada, and describes himself as “passionate about smart connected vehicles, automotive, AI.”

Ford is the leading commercial vehicle brand in the United States and Europe – with shares of 40% and almost 15%, respectively – thanks to the F-Series trucks as well as its Transit vans.

Earlier this year, Ricart moved into a new 116,000-square-foot commercial truck facility that dwarfs the old 18,000-square-foot building, and said he looks forward to working with Ford as they roll out additional connected services.

Purdy and other Ford officials want Ford’s commercial customers to regularly pay for services, creating a revenue stream that flows throughout the vehicle’s life, beyond a one-time transaction every few years.

“When you measure time as a commodity like money, there are lots of those kinds of experiences that customers are willing to pay for because they’re in the productivity business,” Farley said.

The goal for Ford is to lower the total cost of ownership for its commercial customers; raise productivity, such as increased package delivery; and reduce downtime for customer vehicles, said Ted Cannis, head of Ford’s North American commercial vehicle business.

“So now the total addressable market, instead of being just new-vehicle sales is the entire process – parts, service, accessories, connected services,” he said.

Hans Schep, head of Ford’s European commercial vehicle business, said the shift in focus is playing out in meetings on quality. Five years ago, those meetings were about how to reduce Ford’s warranty costs, he said. Now, the discussions are about how to keep its customers’ vehicles on the road.

Ford’s push in commercial vehicles will work hand-in-hand with the push to electrify its vehicles, including the F-150 and Transit.

As part of the efforts, Ford and Germany’s Volkswagen AG (DE:VOWG_p) said in June they would make up to 8 million units of mid-sized pickup trucks and commercial vans over the lifecycle of the vehicles, starting in 2022. Farley believes the automakers’ alliance will allow Ford to use their combined scale to build its European commercial vehicle business even more.