Home
Stocks
Mark Hulbert: Insiders are now unloading stocks — here’s why you shouldn’t see this as a sell signal for this market
Prev Article Next Article
This post was originally published on this site 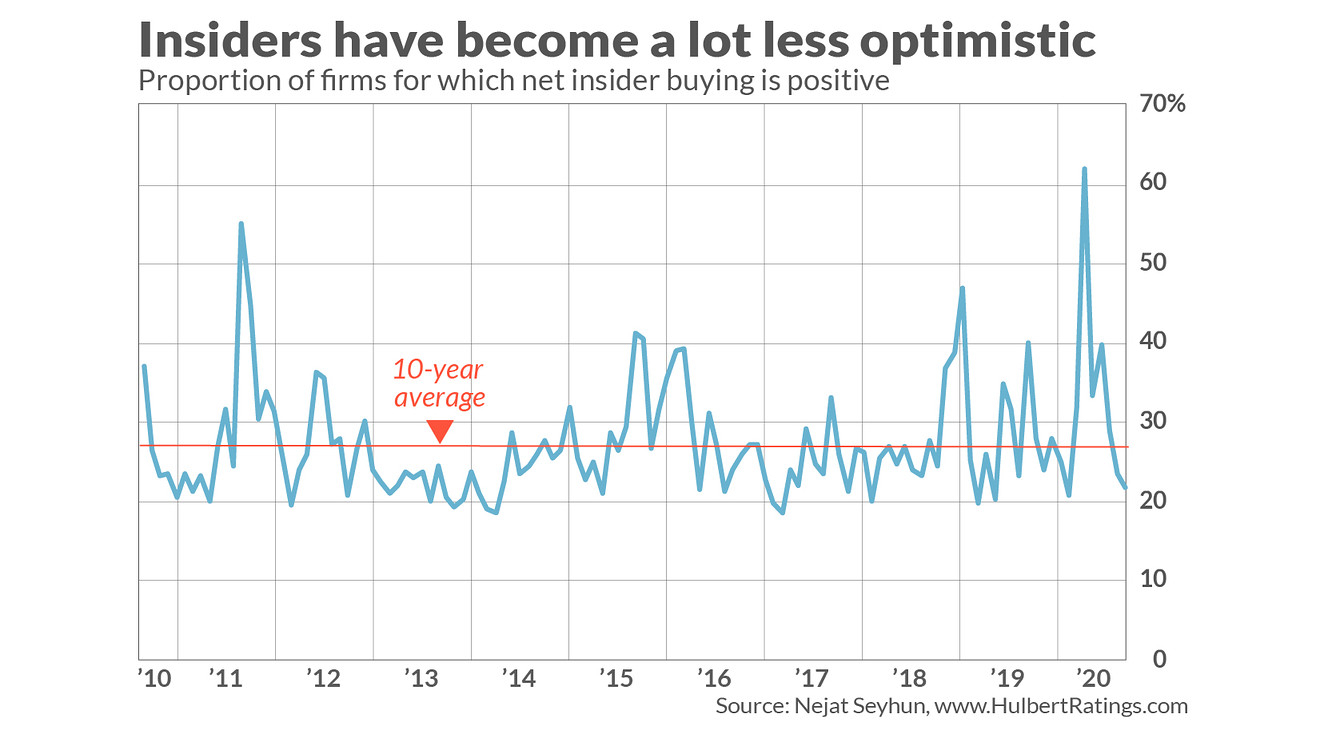 That’s the conclusion I draw from data compiled by Nejat Seyhun, a finance professor at the University of Michigan and one of academia’s leading experts on the behavior of corporate insiders. The last time I checked in with Seyhun, in mid-June, the data on all publicly traded stocks were saying something similar. I reported then that “corporate insiders do not appear to be particularly worried about a bear market occurring anytime soon” and were therefore “providing powerful support for the bull market.”

By corporate insiders I’m referring to a company’s officers and directors as well as its largest shareholders. They are required to report more or less immediately to the Securities and Exchange Commission whenever they buy or sell shares of company stock, and many on Wall Street slice and dice that data for clues about the broad market’s likely direction.

Unlike some on Wall Street, however, Seyhun does not weight each insider equally when slicing and dicing the data. He has found from his research that the third category of insiders—companies’ largest shareholders — do not have particular insight into their firms’ prospects. And it’s crucial to strip out their transactions from the composite data because the dollar value of their purchases and sales typically will be far larger than those undertaken by officers and directors.

Now is one of those times when the largest shareholders are skewing the data. They are selling stock at an aggressive clip, making it look as though insiders as a group are betting on a market decline. But a different picture emerges when we focus on just those insiders that Seyhun’s research has found to be worth following.

To come up with a single indicator, Seyhun focuses on just those firms for which there has been at least one transaction from an officer or director, and then calculates the proportion of them for which more shares were purchased than sold. This net insider buying percent for the first half of August was 21.9%.

As you can see from the chart above, this is a lot lower than the 62.0% that prevailed in the month of March, when the bear market hit its bottom. Nevertheless, Seyhun told me in an email, because this latest reading is not significantly lower than the 10-year average, the best guess is that the market in coming months will not do appreciably better or worse than average.

That’s good news if you were worried about an imminent bear market. It’s not-as-good news if were expecting the stock market over the next few months to repeat its incredible run over the last five months.

These conclusions are based on composite data for the entire market, and as you would expect, there is considerable variation from one sector to another. The sectors for which there is the greatest amount of net insider buying are—as was the case two months ago—energy and financials. In fact, insiders in these sectors are slightly more bullish today than they were then.

That’s very revealing, because both sectors have lost ground over the last two months. The Energy Select Sector SPDR ETF XLE, -1.81% has lost 11.2% since my mid-June insider column was published; the Financials Select Sector SPDR ETF XLF, +0.30% has lost 0.3%. Seyhun has found from his research that one of the most bearish things insiders can do is to sell into a decline, since that suggests they have no confidence that their companies’ shares will recover soon.

Fortunately for these two sectors, that’s not how insiders as a group are behaving.

At the opposite end of the spectrum, insiders in the health-care sector, and especially among small-cap stocks with this sector, are selling at a well-above-average pace.

Mark Hulbert is a regular contributor to MarketWatch. His Hulbert Ratings tracks investment newsletters that pay a flat fee to be audited. He can be reached at mark@hulbertratings.com.