Home
Stocks
: Senate GOP closing in on COVID aid bill deal with White House
Prev Article Next Article
This post was originally published on this site 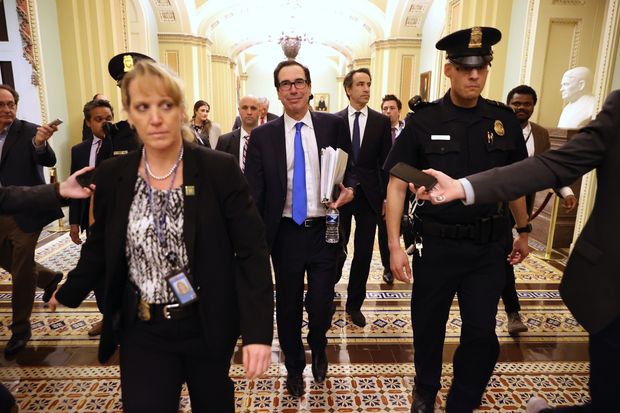 Two top Trump White House officials said Thursday they were near to finalizing an agreement among Republicans on what would be an opening offer to Democrats for the next coronavirus aid bill.

“Whether this is introduced today or not, we’re still looking at the timing. Again, we have a fundamental agreement and we’re going through the language,” Treasury Secretary Steven Mnuchin said at the U.S. Capitol, flanked by Mark Meadows, the White House chief of staff.

The two talked to reporters after meeting with Senate Majority Leader Mitch McConnell and a day after they reached an agreement with Senate Republican appropriators on that portion of the package.

Mnuchin said the outlines included an extension through the end of the year of an add-on amount to jobless benefits, but at a rate intended to replace 70% of a worker’s missed wages, not the $600 a week amount that was in place from the coronavirus aid bill enacted on a bipartisan basis in March.

“This is about wage replacement and we don’t want to incentivize people not to work,” Mnuchin said.

He said the administration is prioritizing money for schools and extending the unemployment add-on, and aiming to have a bill done by July 31. However, labor experts say state computer systems that process unemployment benefits are so antiquated that a delay past tomorrow will mean at least a short interruption in the extra payments.

“The problem is that if Congress doesn’t act by this weekend, states have to turn off the code in their IT systems allowing payment of the $600, and there is not a quick way to flip the ‘on’ switch back on. It will take 2-4 weeks to restart,” said Michele Evermore, senior policy analyst with the left-leaning National Employment Law Project, in an email.

Mnuchin said he did not think there would be a gap and the administration was looking at technical fixes to ensure that.

“There’s a way to extend this, so the majority of the people will get paid the 70% immediately,” he said. “One of the things we’ll do is work with the banks. I think you know there’s plenty of banks that are willing to extend credit to people if they know the government is going to come in. There’s plenty of things we can do.”

The package will include$105 billion for schools and testing, a figure they noted was higher than the Democrats’ $100 billion in their bill in May. Another round of individual checks would also go out, with the same parameters as the first batch in the spring.

They said senators are working on a bipartisan basis on a plan to extend the Paycheck Protection Program, which has more than $100 billion in loan authority sitting unused and expires in early August. The plan would allow businesses with 300 or fewer workers and whose revenues were down by 50% or more to get a second round of help. One of the senators involved in those talks, Maryland Democrat Ben Cardin, though, said the employee threshold had not been agreed to.

How the pieces of the package will be handled legislatively remained unclear. Mnuchin said the they would like to see an overarching package dealing with all the issues, but if that wasn’t possible in a short time frame, the focus would be on the unemployment add-on payment and the school money and other issues could be dealt with in separate, later bills.

But that idea, breaking the aid package into more bite-size pieces, drew a quick rebuke from House Speaker Nancy Pelosi.

“This is a package. We cannot piecemeal this,” she said at her weekly press conference.

Mnuchin said there will be more time to work on issues that don’t face immediate deadlines.

“We’re at a trillion dollars,” he said. “If we need to come back to work in the next 45 days, 60 days, if the economy needs more money – we’ve done four of these deals – we can always come back and do more,”