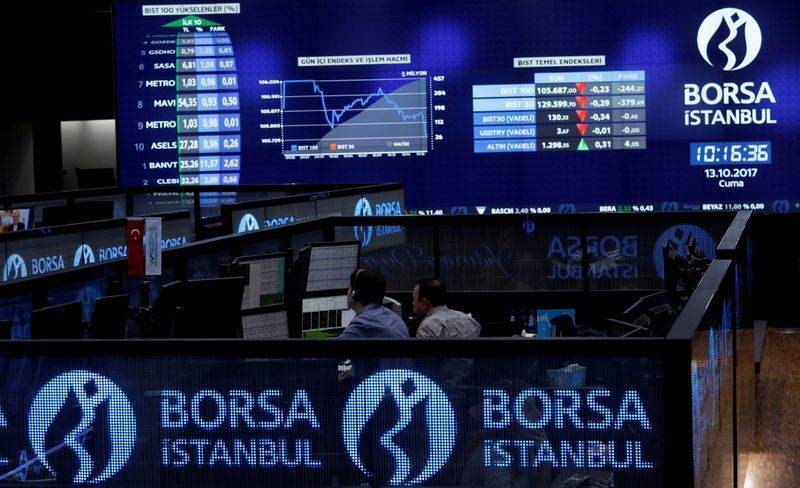 LONDON (Reuters) – Turkey’s potential ejection from MSCI’s widely followed emerging markets index could suck almost a billion dollars out of its stock markets, dealing another blow to the country, whose position is already waning on global markets.

The world’s largest index provider said late on Tuesday it was considering launching a consultation on whether Turkey should remain in its emerging market index or be reclassified to “frontier” or “standalone” status.

The warning comes at a sensitive time for Turkey, whose corporate sector relies heavily on foreign investment flows.

Investors are still nervous after the lira plunged to a record low in May, and Turkey’s economy, reeling from the impact of the coronavirus pandemic on domestic demand, tourism and exports, is expected to shrink 0.75% this year.

A consultation would only be the first step in the process and would not automatically lead to ejection from the index. But it is another warning sign and a clear reminder of Turkey’s contentious relationship with foreign investors.

Some $900 million was at risk because of asset managers that track the MSCI main emerging market index would have to liquidate if Turkey was booted out, calculated Charles Robertson, global chief economist at Renaissance Capital.

“Turkey’s importance has been shrinking as investors have increasingly steered clear of an unpredictable economy led by a president who believes higher interest rates create inflation,” Robertson wrote in a note to clients. “A downgrade would be embarrassing for Turkey.”

Borsa Istanbul, the Capital Markets Board (SPK) and Turkey’s central bank did not respond to a request for comment, while the treasury declined to comment.

President Tayyip Erdogan has frequently accused foreign speculators of destabilising the lira, and policymakers have tinkered numerous times with offshore lira markets, squeezing out liquidity and effectively preventing participants from shorting the currency

MSCI said the introduction of short selling bans in October 2019 and stock lending bans in February 2020 had crimped access from abroad to Turkish shares.

The SPK said at the time that the move was made to “ensure the functioning of capital markets in a reliable, transparent and stable environment and to protect the rights and benefits of investors” within the framework of SPK laws.

Turkey is not the only equity market in MSCI’s cross hairs – a consultation on whether Argentina should lose its emerging market membership is already underway.

However, Argentina, a serial debt defaulter and prone to frequent political upheavals, is different from Turkey, which for over a decade was viewed as a promising emerging economy with a large population, robust banks and liquid financial markets.

Foreign investors hold just over 50% of the total market capitalization, data from the Turkish investor relations society and Turkey’s central securities depository show. Yet for much of the past decade, foreigners owned well over 60% of the $176 billion market.

But while they represent only 0.8% of the total Borsa Istanbul investor base, they account for around a quarter of its daily trading volume.

Foreign investors’ waning participation in Turkish equities mirrors the debt trend, where non-residents now hold only around 6% of sovereign debt compared with 29% in 2013.

The possibility of joining MSCI’s frontier markets index – a subset of smaller and riskier developing countries with less liquid or more restricted stock markets but also a much smaller following in the investment world – would be a blow for Turkey.

“Its ejection from the (MSCI EM) index would prompt the passive funds that follow that index to sell and give active investors in mainstream EM another reason to ignore Turkey,” said Hasnain Malik, head of equity research at Tellimer.

Turkey’s outsized daily trading volumes compared with other frontier markets means such a relegation would also create a headache for MSCI and fund managers benchmarking to the frontier index.

Over the last six months, Turkey’s average daily trading activity was close to $2 billion, which would dwarf all others, including Vietnam – next in line with a volume of $270 million, Malik calculated.

Kim Catechis, head of investment strategy at Legg Mason (NYSE:LM) affiliate Martin Currie, said he expected MSCI would not eject Turkey from its emerging markets index for at least a year.