Home
Stocks
Mark Hulbert: The Nasdaq is likely to hit an all-time high because traders can’t believe this rally
Prev Article Next Article
This post was originally published on this site

The U.S. market’s rally took the Nasdaq Composite to within 1.6% of a new all-time high earlier this week, but short-term Nasdaq-focused market timers are not exhibiting the irrational exuberance you otherwise would expect.

That’s understandable. Who would have dared think at the depths of the bear market in mid-March that by early June we’d even be talking about new highs for the Nasdaq COMP, -0.69% ? Now that we’re here, you’d think that market timers would become positively giddy. But they haven’t — and that’s encouraging for bulls from a contrarian perspective.

Truth is, market timers have been mostly skeptical of this rally from the start. Almost a month ago I reported that, because of their skepticism, “the rally has more room to run.” Since that column appeared, the Nasdaq is up 7.6% and the S&P 500 SPX, -0.33% has gained 8.8%.

Fortunately for the bulls, the timers remain surprisingly skeptical. This is particularly evident among those short-term market timers who focus on the Nasdaq market. These timers’ average recommended exposure level right now stands at 53.2% (as measured by the Hulbert Nasdaq Newsletter Sentiment Index, or HNNSI). This means the average Nasdaq market timer is allocating almost half of his short-term equity trading portfolio to cash, which is incredible when the market is so close to a new all-time high. 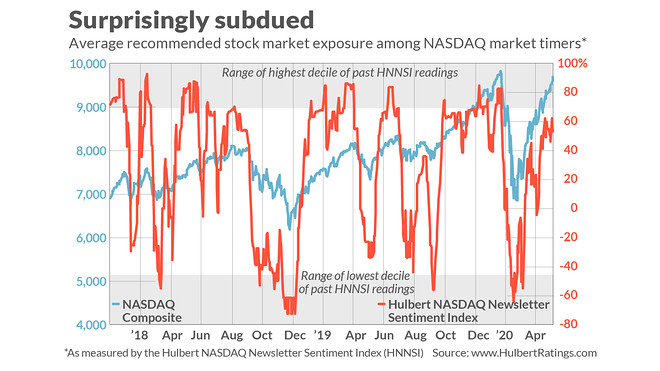 • The American Association of Individual Investors’ Sentiment Survey is showing even less bullishness than is the HNNSI. It is based on the number of the Association’s members who are in the bullish, bearish or neutral camps. For historical comparisons I calculate the number of outright bulls as a percentage of those who either are outright bullish or bearish. That currently stands at 47.1%, which is at the 26th percentile of the historical distribution since 1987.

• A recently-introduced sentiment index from the San Francisco Federal Reserve Bank also is indicating widespread gloom. This index is a “high frequency measure of economic sentiment based on lexical analysis of economics-related news articles.” The latest level is at the 4th percentile of the historical distribution, meaning that it’s been higher than it is now (more bullish) 96% of the time in past decades.

• Another portrait of relative gloom comes from the Economic Policy Uncertainty index, which was created by Scott Baker of Northwestern, Nick Bloom of Stanford, and Steven Davis of the University of Chicago. It measures economic uncertainty based on “the frequency of news media references to economic policy uncertainty, the number of federal tax code provisions set to expire in future years, and the extent of forecaster disagreement over future inflation and federal government purchases.” The U.S.-based EPU is currently higher than all other readings since the professors began collecting data in 1985 — indicating that economic policy uncertainty has never been greater.

Undoubtedly, there’s so much uncertainty and gloom due in part to our vivid memories of the waterfall decline in February and March. Those memories are keeping strong the veritable Wall of Worry that bull markets climb.

Contrarians typically don’t try to forecast how long the rally will last, letting the sentiment data tell the story on a day-by-day basis. It would be a bad sign if market timers in coming days jump on the bullish bandwagon in a big way, for example.

But, if the market timers’ mood remains subdued, this incredible rally will have the potential to keep going even longer.

More: The next 10% up in the S&P 500 is all about the pandemic recovery — and it’s doable, this analyst says

Plus: Coronavirus can shake up ESG investing — here’s what investors should demand