“ ‘I find it baffling and reprehensible that any Catholic facility would allow itself to be so egregiously misused and manipulated in a fashion that violates our religious principles.’ ”

Washington Archbishop Wilton Gregory had some harsh words for President Trump and his visit Tuesday to the Saint John Paul II National Shrine: “I find it baffling and reprehensible that any Catholic facility would allow itself to be so egregiously misused and manipulated in a fashion that violates our religious principles, which call us to defend the rights of all people even those with whom we might disagree.”

“Saint Pope John Paul II was an ardent defender of the rights and dignity of human beings. His legacy bears vivid witness to that truth. He certainly would not condone the use of tear gas and other deterrents to silence, scatter or intimidate them for a photo opportunity in front of a place of worship and peace,” the archbishop said in a statement. (Trump visited the shrine earlier Tuesday, accompanied by first lady Melania Trump.)

On Sunday, Gregory had said, “In astonishment, we are seeing the reactions of people across the United States as they express feelings of frustration, hurt, and anger in their cry for justice for George Floyd, whom we painfully watched being suffocated in front of our eyes on video in Minneapolis, Minn. this past week. Many of us remember similar incidents in our history that accompanied the Civil Rights Movement, where we repeatedly saw black Americans viciously brutalized by police.” 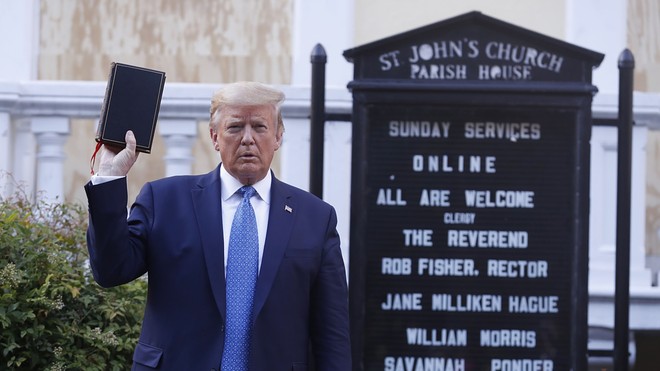 President Trump posed with a Bible outside St. John’s Episcopal Church after the adjacent public square was forcibly cleared of peaceful protesters by federal forces.

Trump late Monday threatened to mobilize the U.S. military to keep the peace across the nation, following days of violent protests. Speaking at the Rose Garden of the White House, Trump derided governors for not acting more harshly against demonstrators, and said he was deploying “heavily armed” soldiers and federal police in Washington to quell protests: “I am mobilizing all federal and local resources, civilian and military, to protect the rights of law abiding Americans.”

Police used tear gas to clear a crowd of protesters across from the White House on Monday evening so Trump could walk to the historic St. John’s Episcopal Church, where he posed for photographers holding a Bible. The Rev. Mariann Budde, bishop of the Episcopal Diocese of Washington, told the Washington Post that she did not know of Trump’s plans beforehand. “I am outraged,” she said, adding: “Everything he has said and done is to inflame violence. I don’t want President Trump speaking for St. John’s.”

Joe Biden on Tuesday called the death of Floyd a “wake-up call,” as he blasted Trump over a vow to deploy the military to quell protests. In an address at Philadelphia’s City Hall, the presumptive Democratic presidential nominee invoked Floyd, a black man, who died after he was pinned at the neck by a white Minneapolis police officer. “ ‘I can’t breathe,’ ” Biden said, quoting Floyd’s last words. “But [the words] didn’t die with him. They’re still being heard. They’re echoing across this nation.”