Home
Stocks
: Hundreds of cars clog Madrid’s center in mass protest against government’s handling of coronavirus
Prev Article Next Article
This post was originally published on this site

The so-called “Caravan for Spain and Liberty” protest against the left-wing government’s handling of the coronavirus outbreak was organized by the far right-wing Vox party, which emerged after years of near obscurity to win 52 seats in Congress last April, double expectations. Founded by members of the Popular Party, Vox is known as a nationalist, anti-immigrant and ultra conservative party.

The party accuses the government of Socialist Prime Minister Pedro Sánchez of misleading the public about the impact of the health crisis and for violating Spaniards’ rights by confining people to their homes and closing business during the lockdown.

Vox called for protesters to attend the protests in their vehicles and thus skirt the current prohibition on social gatherings in effect under the nation’s two-month long state of emergency designed to reduce contagion risks.

Spain’s government says that the confinement measures have been necessary to save the nation’s hospitals from collapse and thousands of more lives.

In the crowd of thousands on Saturday was Vox leader Santiago Abascal, who rode in the top of a red and yellow bus, covered with antigovernment hashtags. Other protests organized by Vox took place in Barcelona and elsewhere in the country, but Madrid’s may have been the biggest:

Throngs of flag-waving protestors lined Paseo de la Castellana, clapping, waving Spanish flags and shouting enthusiastic support at the cars, and calling for Prime Minister Pedro Sanchez and his government to resign. Others hopped out of those autos in standstill traffic, at times bumping up against fellow supporters in perhaps less-than-ideal social spacing. 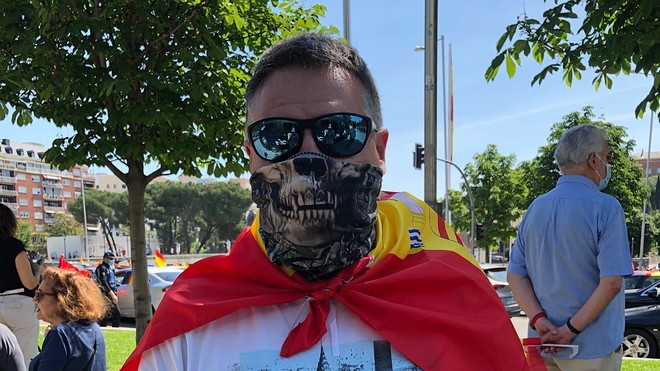 It’s a scene that would have been unthinkable even a month ago in a country that has endured one of the strictest lockdowns in the world and one of the worst outbreaks, with nearly 30,000 dead and over 230,000 infected.

Abascal himself contracted the virus after a massive party rally in Madrid in early March, days before the government declared a state of emergency. A women’s march held on the same day was also blamed by some for spreading the deadly infection.

Among the protesters were Jacobo Sanchez and his two children. “We are at home for two to three months and the government has helped the people to pass the crisis and but to save their positions and they are thinking only of themselves,” said Sanchez, when asked why he had come.

“Firstly, they need to explain, crystal clear, the situation — sanitary, economic and all the circumstances today in Spain and the government is blank,” said Sanchez, who added that he has been working from home.

Another protester on foot and draped in a Spanish flag, identifying himself only as Joaquin complained that “with these people in the government right now, we don’t have a future. What they want to have is a dictatorship,” he said.

Spain’s government declared a state of emergency on March 14 but Madrid is about to ease the lockdown to Phase One on Monday and businesses across the city are reopening, though restrictions on movement out of the region remain.

Along with Barcelona, Madrid has been slow to exit lockdowns because those areas have seen the most infections and death. The country relies heavily on tourism and the closed borders have left around 30% of the country’s labor force out of work and reliant on handouts and government support.

Spain will reopen to overseas tourists from July, the prime minister announced Saturday, pledging that the government will guarantee the safety of visitors and locals as the country emerges from one of Europe’s strictest coronavirus lockdowns.

Saturday’s protests follow recent demonstrations in the wealthy Salamanca neighborhood of Madrid, where mask-wearing residents have taken to the streets to complain about the lockdown and what they see as a power grab by Sanchez. 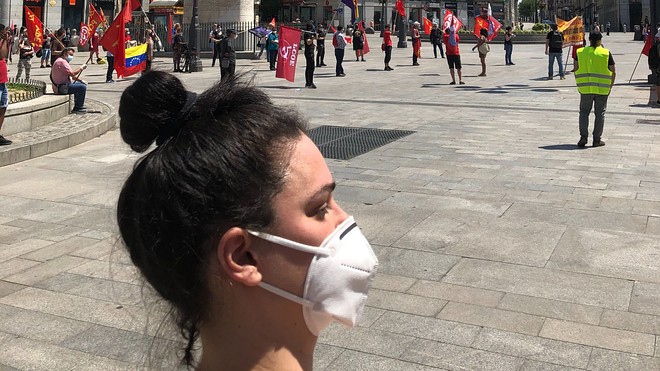 Street worker and actress Andrea Garcia Garrera in Puerta del Sol on May 23, 2020

A few blocks away in Puerta del Sol, a handful of protesters were standing two meters apart, waving Spanish Communist Worker Party flags and demanding more support and help for employees in the country. On the sidelines was topless street sex worker and actress, Andrea Garcia Garrera, who drew a small crowd of reporters and police with her shouts of “Prostitutes have the right to eat too!”

Garrera said she has survived the past few weeks by living off her savings. “I’m here revealing myself so that the whole world knows that prostitutes need to eat, we need to pay our mortgages and lights and water bills and no one is helping us.”

But unlike the caravan protesters, she doesn’t blame Sanchez’s government for the coronavirus response, something that she says is hard for anyone to cope with. “But they could help us more,” she says.

Associated Press contributed to this article.