Home
Stocks
Outside the Box: As the economy reopens, these three indicators will show the strength of the recovery
Prev Article Next Article
This post was originally published on this site 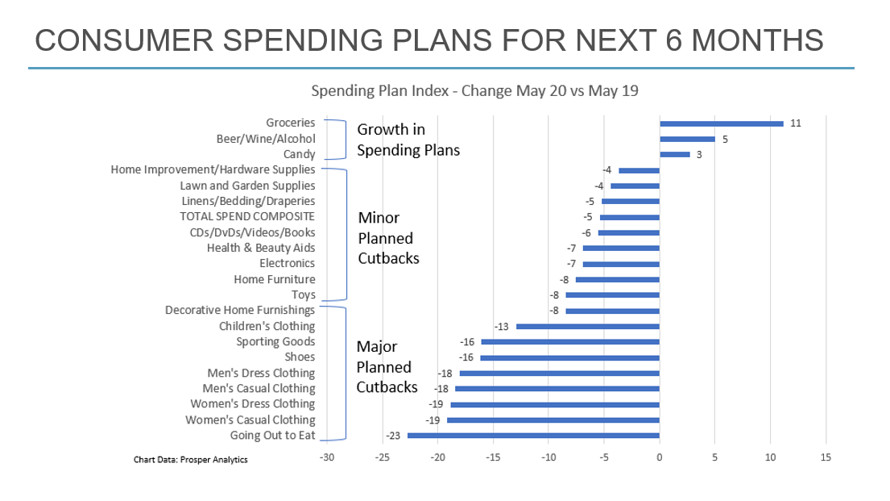 Since the start of the crisis experts have predicted every scenario from hitting a depression to immediate recovery. They have used every indicator to justify their forecast, whether it be the curve of COVID-19 cases, unemployment rate or the historical precedents.

The challenge is that in many ways the current crisis breaks precedent, making it difficult for us to plan ahead, especially since the greatest unknown is how American consumers will behave within the “new normal.”

Every state has started to reopen its economy, which will give us the first true indications of the current economic direction, outlook into the full impact of the downturn and nature of the recovery. During the next six weeks, there are three key areas that should serve as reliable indicators for long term recovery.

The U.S. consumer has served as the strongest pillar of the economy for the last decade. But in March and April, consumer sentiment fell at a historic rate. Consumers have started increasing their savings and currently plan to curb their spending for the next six months (see chart above). As the economy reopens, consumers will give the first indications about whether they keep this recession mindset or start changing their behaviors.

Historically, there are applicable precedents for consumers to either continue their current behaviors or to rebound quickly. We could see the emergence of a recession-minded consumer; that is, a consumer that acts as if a recession is taking place, rolling back on spending and behaving more cautiously, even when the economic data demonstrates otherwise.

Following the 2007-2009 recession consumers continued their recession behaviors for the next five years. On the other hand, consumers bounced back quickly from the recession in the early 1990s specifically because it was considered a blip. The economy left recession almost as quickly as we entered it.

The combination of consumer sentiment and spending in the next two months will give us the first indications as to the mindset and habits of U.S. consumers with a fully opened economy, which will serve as benchmarks for the growth that will be needed for economic recovery.

The biggest headlines have been around the record level of unemployment. Many are assuming that there will be an immediate drop once the economy reopens. But the real indicator will be the amount that it falls.

It is still unclear how many companies will be able to hire back their full workforce and the number of Americans on temporary unemployment right now that will be able to get their jobs back. Additionally, nearly 50% of unemployed workers are receiving greater income from the government as a result of the “bonus unemployment insurance” program and may not attempt to re-enter the workforce until August, when that benefit expires.

In contrast to the employment rate, average hourly wages have increased during the last few months. It will be important to keep those numbers healthy in order for the consumer to rebound. We can expect that there will be a downward adjustment as the lowest-paid workers return to work, but if wages fall below the pre-recession rates, it could be an indication of businesses trying to cover costs or losses in the wake of lower demand even after the economy reopens.

The Markit manufacturing PMI is one of the strongest economic indicators for industrial production. In April, it dropped to 36.9, an all-time low, precipitated by coronavirus-related lockdowns and only rebounded to 39.8 in May. U.S. manufacturing has experienced significant challenges and downturns during the last decade, but the government has been able to support the industry among strong global demand.

It is safe to assume that there will be shrinking global demand as emerging markets across the globe struggle to address the health crisis. Domestic demand will need to provide a balance due to more limited opportunities for importing manufacturing as a result of the global pandemic.

The May PMI did not provide a reason for optimism. If the June report does not show further growth, ideally reaching 50 as a benchmark, it can be expected that manufacturing will have a longer road to recovery, which means there will be a reliance on the consumer to lead economic recovery through the rest of 2020.

Once the economy reopens and economic data from the second quarter becomes available there will be sufficient indicators to inform the path for economic recovery. But regardless of the results of these indicators, there is reason to believe that the recovery will not be the same across the country geographically or across all industries.

Companies will have to stay focused on the economic indicators that are most pertinent to their industry and customer base, while at the same time recognizing there are potential for more anomalies that could impact their recovery through the end of 2020.

Andrew Duguay is the chief economist at Prevedere, an industry insights and predictive analytics company, helping business leaders make better decisions by providing a real-time view of their company’s future.