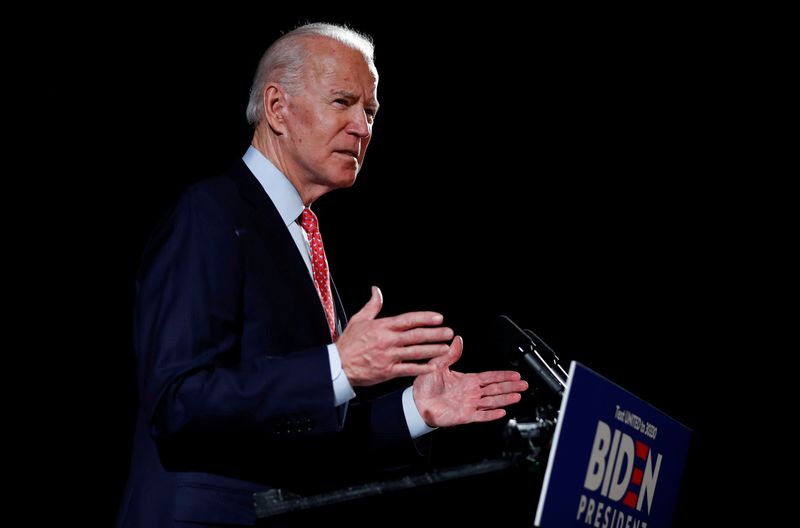 NEW YORK (Reuters) – Allies of presumptive Democratic presidential nominee Joe Biden are being told to sharpen attacks on President Donald Trump’s stimulus efforts as thinly veiled “cronyism,” according to a memo being sent to Democratic officeholders and supporters on Friday.

The memo, which was seen by Reuters, gives Biden campaign representatives new language to use in their attacks on Trump and shows a campaign honing an increasingly aggressive tone ahead of the Nov. 3 election.

The strategy document says Trump’s post-pandemic stimulus contains “the largest corporate bailout in American history,” a kind of “cronyism,” that is “systematically rigged in favor of big businesses, the wealthy, and the financial sector – and against the working people and middle class families who are enduring the worst economic losses the country has faced in modern memory.”

A Biden campaign spokesman declined to comment on the memo, which was written by two of the campaign’s top policy advisers, Stef Feldman and Jake Sullivan.

“The president has been hard at work protecting the safety of Americans and also safeguarding the economy, while Joe Biden sits in his basement lobbing political hand grenades in a desperate plea for relevance,” Murtaugh said.

Biden and Trump are both retooling economic plans after the coronavirus pandemic put more than 33 million Americans out of work and ended the longest recorded boom in U.S. history.

Each candidate is also searching for a winning message on the economy for the election that political strategists increasingly see as a single-issue campaign – how to deal with the health and economic consequences of the pandemic.

The novel coronavirus has infected more than 1.25 million Americans and killed more than 75,000, the world’s highest number of cases and deaths.

With the new attacks, Biden is attempting to court not just moderate and independent voters but also liberals in his own party, some of whom favored the tough-on-corporation message of Senators Bernie Sanders and Elizabeth Warren, his former rivals for the Democratic nomination.

Even though Biden has strong union ties and touts working-class values, some left-wing voters find his policies not progressive enough and also dislike his use of high-dollar fundraisers to finance his campaign.

While Democrats in Congress supported nearly $3 trillion compromise stimulus legislation, Biden’s team is asking allies to attack various faults that have emerged in the program, the memo shows.

The campaign cited media reports and research suggesting that small businesses with ties to the administration received aid, that banks may be prioritizing wealthy clients when making loans under the emergency program and that Democratic-led states that did not support Trump’s re-election might not be getting sufficient support.

Government officials have said they are prioritizing oversight as they manage the programs.

A Reuters analysis on Thursday showed that some U.S. companies that took in emergency government loans had months of cash on hand to cover expenses.

Trump’s campaign has been refining its message too after the strong economy it was overseeing withered under the coronavirus pandemic.

Several Trump aides say their 2020 campaign will now be chiefly defined by two themes: Trump is the only candidate who can resurrect the economy and that Biden will not be as tough on China, a country Trump is blaming for the pandemic.

Reuters/Ipsos polling this week showed that 45% of Americans said Trump was better suited to create jobs, while 32% said Biden was the better candidate for that task.

The former vice president was due to deliver an economic policy speech on Friday on NowThis, a left-leaning news platform aimed at younger audiences. It was not clear if his speech would match the tone or content of the memo.