Home
Stocks
Are ETFs safe… for retail investors?
Prev Article Next Article
This post was originally published on this site 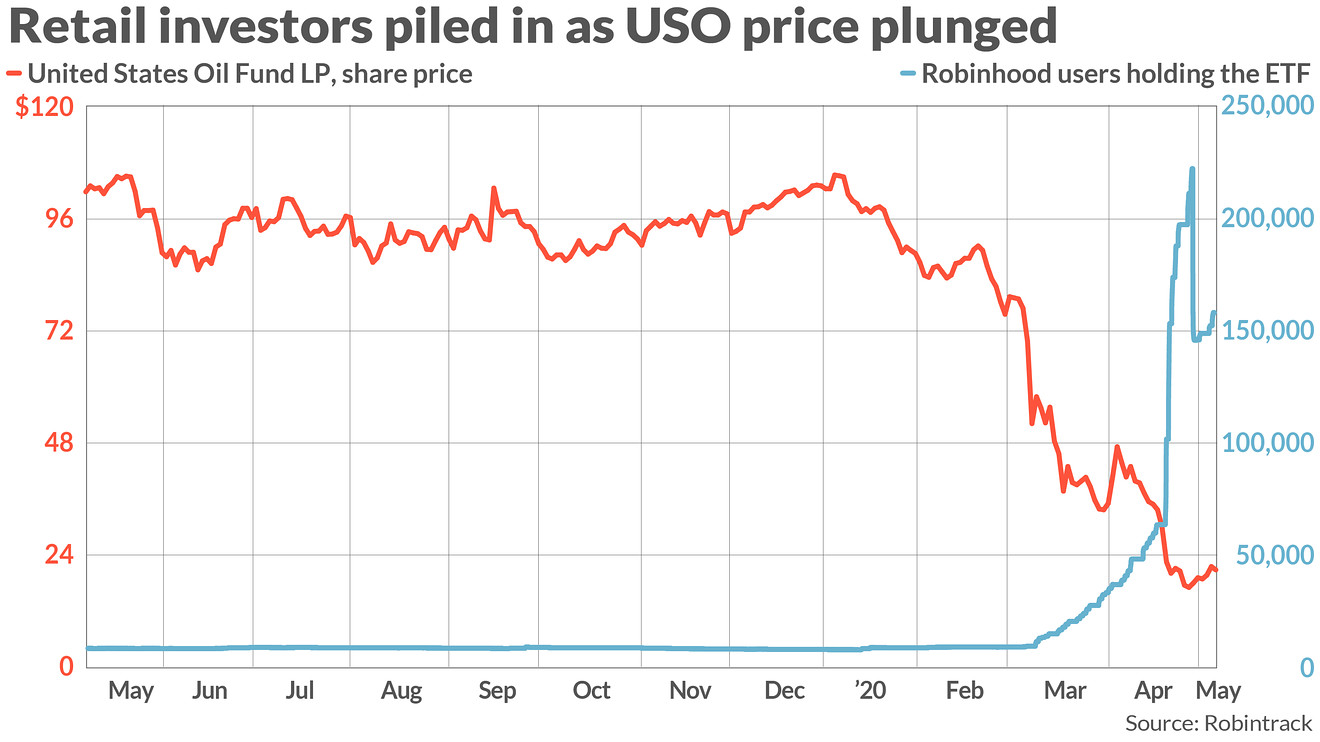 When the price of oil fell off a cliff in April, it upended some previously sacrosanct financial-market beliefs.

The most visible may be that the price of oil, a tangible commodity, even if one that’s currently not much in demand, can actually go negative. But there’s another realization dawning on market participants: letting mom-and-pop investors have access to financial products that were previously the domain of sophisticated traders may not be a win-win after all.

“Choice is important. But it’s a double-edged sword. We’ve put extremely complex investments in an easy to access wrapper.”

Retail investors piled into the biggest and most visible exchange-traded fund that tracks oil price movements even as the price – and the fund’s share values – careened downward.

The United States Oil Fund USO, +3.30% is now down 80% in the year to date, even as the number of investors holding the ETF in a Robinhood brokerage account has increased more than 22 times in that period. USO managers spent several weeks in May shuffling the fund’s makeup nearly every day to try to stay above water.

See:Retail investors are getting ‘hosed’ with the biggest oil ETF down more than 30% this week

And USO, while the most high-profile ETF blow-up, wasn’t the only fracture. Eight oil exchange-traded products closed as a result of the volatility, according to Morningstar data, and in the year to date more ETFs have closed than opened, for the first time in years.

And the unsettled financial markets of the past few months have led several market index providers to postpone the regularly scheduled rebalancing of their portfolios. As Geraci put it, index providers deciding to tread lightly is small potatoes compared to the near-daily contortions of USO managers just to stay alive, but skipping routine maintenance because markets are choppy “is not what (the indexes) were supposed to do.”

Now a consensus may be emerging around the idea that there should be protections for investors in ETFs made up of riskier assets, just as for those trading the assets directly. As ETF industry veteran Dave Nadig told MarketWatch in mid-April, of USO, “I would argue that you should not be investing in this if you are not allowed to invest in the underlying assets.”

In USO’s case, that refers to futures contracts. Investors who want to trade futures through a brokerage must be screened and receive permission.

But there’s also reason to think other ETF products, such as those that use leverage, can be just as risky.

“It’s pretty clear that a lot of individual investors underestimate the downside risks of many of the investments they make, and that’s especially true with regard to leverage,” said Rawley Heimer, a Boston College professor whose research focuses on the decisions retail investors make in financial markets.

“A lot of the evidence shows that people don’t quite understand how leverage affects the risk and return of their investment and don’t internalize the downside risk that comes with it,” Heimer said.

While it may be tempting to suggest any adult smart enough to set up a brokerage account and start trading sophisticated instruments should know what they’re getting into, Heimer and Geraci argue otherwise.

“There are absolutely reasons to try to protect uninformed investors from themselves,” Heimer said, and not just for their own individual welfare. The presence of more unsophisticated actors in the market “can exacerbate market volatility, it can make markets less informative, and it can lead to capital shortfalls for the financial institutions,” he said.

“The industry as a whole has to do a better job of educating on the risks,” Geraci said in an interview. “Without the proper education it has the potential to be a black eye for the industry.”

Geraci thinks subtle labelling changes may make a difference. “’The United States Oil Fund’ should have been ‘the United States Oil Futures Fund’,” he said. He also thinks earlier efforts by industry titan BlackRock to coordinate clearer labelling on different types of exchange-traded products, such as ETFs, for funds, or ETNs, for notes, should be reconsidered.

(Exchange-traded notes, which are actually bank-issued bonds, have a high-profile blow-up in their own history, as when a volatility gauge from Credit Suisse lost all its value and closed down in 2018.)

But Heimer says it’s not clear whether investors are best helped by more education, or by caps on their trading. Like Nadig, he’s in favor of more hurdles for anyone interested in investing in non-traditional assets.

Thursday marks the 10-year anniversary of the “Flash Crash”, a day on which stock markets plunged suddenly, losing an amount that was at that time its biggest intraday drop ever, before recovering slightly. In today’s terms, that would equate to a 2,157-point drop for the Dow, according to Dow Jones Market Data.

ETF industry participants have spent the past decade arguing that the crush of new money and fresh investors into mostly passively-managed ETFs won’t be responsible for big market-wide glitches, and should not be feared. In fact, many point to ETF resilience throughout the March volatility as proof that the products are safe.

Still, the USO episode gives Heimer pause. “As all this retail money has gone into ETFs, it puts prices pressure on the underlying assets as well as the rest of the market,” he said. “The ETF is the new individual stock in some respects.”

Related:Investors are paying more to short sell ETFs. Here’s what that tells us about the market.