Home
Stocks
Caroline Baum: Trump’s claims about building the best economy rang hollow even before the virus knocked out the service sectors
Prev Article Next Article
This post was originally published on this site 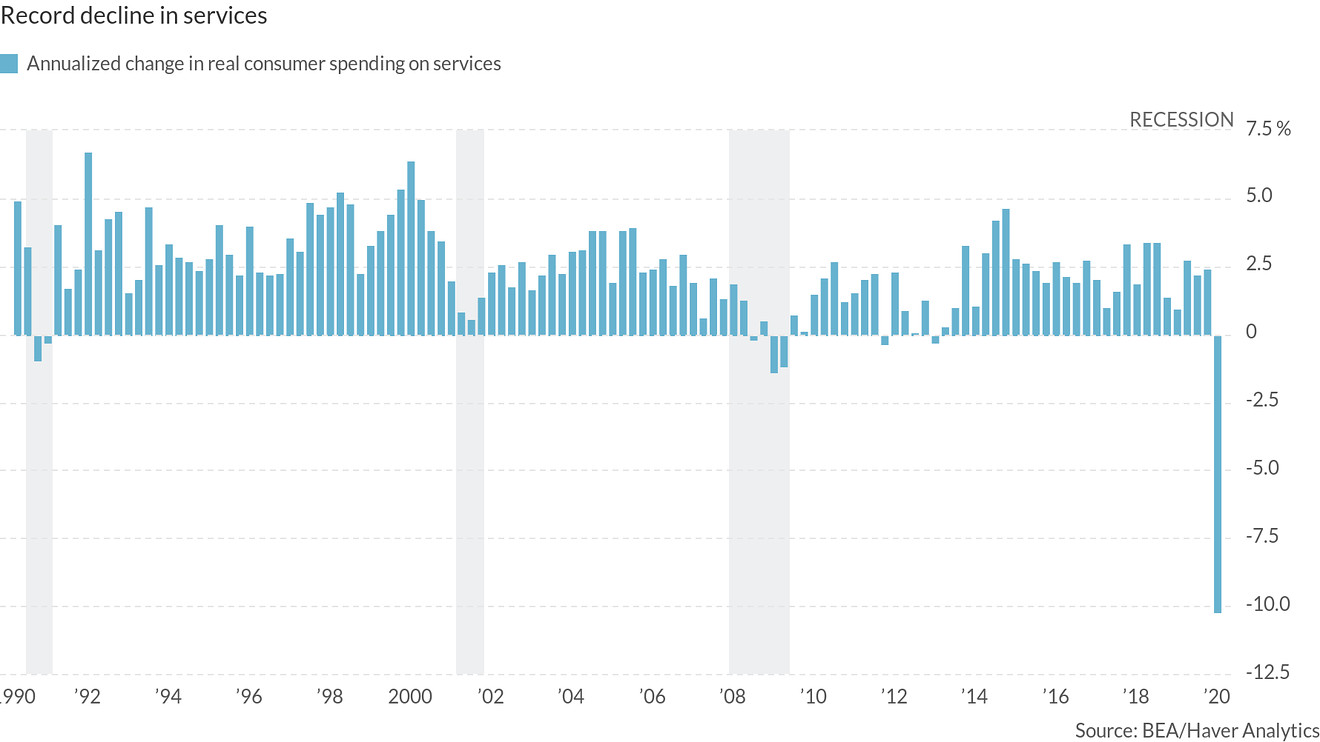 Confronted with a podium and a ready-made audience, President Donald Trump never lets an opportunity go by to boast that he has “built the greatest economy in the history of the world.”

“And we’re going to do it again,” the builder-in-chief said at Monday’s press briefing. “And it’s not going to be long… I think it’s going to build fast. I think it’ll be a tremendous, tremendous comeback.”

The first statement is downright false. The second is wishful thinking. Let’s take a look at both of them.

Trump’s claim of “the best economy in the history of the world,” which he repeats every chance he gets, is based on two metrics: the civilian unemployment rate, which was hovering near a half-century low of 3.5% until February; and the stock market, which hit an all-time high in February.

And he didn’t build it. The unemployment rate had been on a downward trajectory since peaking at 10% in October 2009. It had already dropped to 4.7% when Trump took office in January 2017, so the trend was already in place.

When it comes to assessing the status of an economy, most analysts look to economic growth, or gross domestic product. On that score, Trump’s record is mediocre.

From 2017, when Trump took office, through the end of 2019, real GDP averaged 2.5%. That pales in comparison to the economy’s output under Ronald Reagan and Bill Clinton, not to mention the president’s promises of 3%, 4% even 6% growth.

Not that slower trend growth his fault. The slow growth in productivity and in the labor force, the result of an aging population, have reduced potential GDP growth to something close to 2%.

Under the circumstances, “as good as it gets” is closer to the truth than “the greatest in the history of the world.”

As for Trump’s forecast for a “tremendous comeback” and a “spectacular” third and fourth quarter, don’t count on it.

Opinion: Trump fails the ultimate test as president: Protecting us from risks as only the federal government can

For starters, opening the economy by decree — by lifting stay-at-home orders —- does not mean the economy will open. At least not in the pre-pandemic sense.

As Jonathan Last framed it in The Bulwark: “You can ‘reopen’ the country all you want. You cannot force people to act as though there is not a pandemic.”

Given the green light to frequent bars, restaurants, salons and movie theatres, are Americans going to be eager to resume their pre-coronavirus behavior? They may be eager, but they will be cautious: afraid to resume life as they knew it until such time as there is a vaccine or effective treatment for COVID-19.

Will Americans rush to rebook those cancelled cruises or flights to the Caribbean? Will they crowd into bars, restaurants, concert halls and sports stadiums? Some will. Most won’t.

And what about Americans who lost their jobs and their businesses, who are living on enhanced unemployment benefits, government relief checks and forgivable small business loans? More than 26 million people filed for unemployment insurance in the last five weeks. Are they going to head out to the mall to shop the first chance they get? Saving, not spending, will be the order of the day once folks get back to some semblance of normalcy.

Yes, the federal government is spending trillions of dollars in response to the pandemic to support businesses, individuals, state and local governments, hospitals and health-care providers, but the money is about keeping people whole — a form of life support — not fiscal stimulus as it is generally conceived.

Wednesday’s first look at first-quarter GDP provided a taste of things to come, with the real damage to be reflected in the second-quarter numbers.

Real GDP contracted at a 4.8% annualized rate in the first quarter, worse than consensus estimates. As bad as it looks, the truth is likely to be worse on second and third viewing, according to economists at Goldman Sachs.

Why? Because advance GDP estimates reflect assumptions about data that aren’t available at the time. When compounded by limited access to data on account of business closures, it’s easy to see how more complete data would exacerbate the trend: the downtrend, in this case.

Now read this: In the midst of the coronavirus pandemic, spending on health care collapses 18%

One of the more stunning revelations in the GDP report was the 10.6% decline in consumer spending on services, the biggest drop on record, according to the Bureau of Economic Analysis.

Services such as travel and tourism, hospitality, restaurants and entertainment are all contact sports, so to speak. Consumers will be cautious about engaging in activities in crowded venues until they are certain they are safe.

Which makes monetary and fiscal policy actions a necessary but not a sufficient condition for an economic recovery. A return to economic health requires a return to physical health. Until that happens, Trump isn’t going to build the greatest economy… again.