Home
Market
Exclusive: Neiman Marcus to file for bankruptcy as soon as this week – sources
Prev Article Next Article
This post was originally published on this sitehttps://i-invdn-com.akamaized.net/trkd-images/LYNXMPEG3I06J_L.jpg 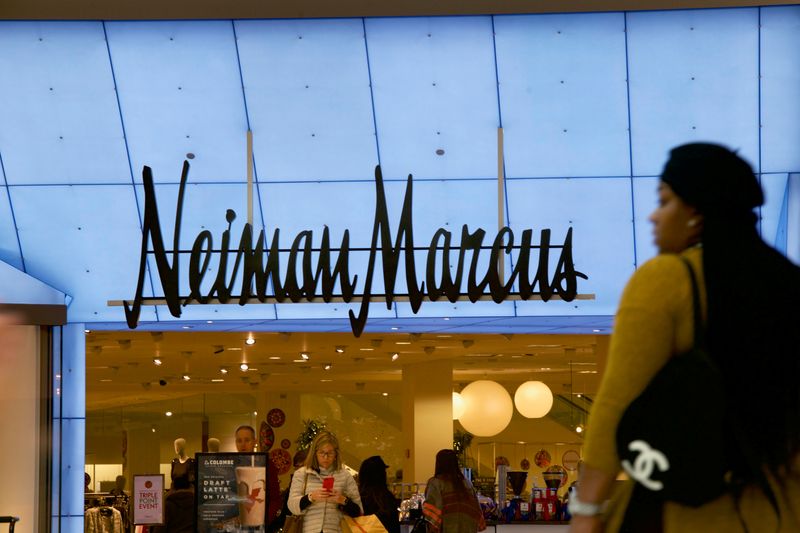 (Reuters) – Neiman Marcus Group is preparing to seek bankruptcy protection as soon as this week, becoming the first major U.S. department store operator to succumb to the economic fallout from the coronavirus outbreak, people familiar with the matter said.

The debt-laden Dallas-based company has been left with few options after the pandemic forced it to temporarily shut all 43 of its Neiman Marcus locations, roughly two dozen Last Call stores and its two Bergdorf Goodman stores in New York.

Neiman Marcus is in the final stages of negotiating a loan with its creditors totaling hundreds of millions of dollars, which would sustain some of its operations during bankruptcy proceedings, according to the sources. It has also furloughed many of its roughly 14,000 employees.

The bankruptcy filing could come within days, though the timing could slip, the sources said. Neiman Marcus skipped millions of dollars in debt payments last week, including one that only gave the company a few days to avoid a default.

Neiman Marcus’ borrowings total about $4.8 billion, according to credit ratings firm Standard & Poor’s. Some of this debt is the legacy of its $6 billion leveraged buyout in 2013 by its owners, private equity firm Ares Management Corp (N:ARES) and Canada Pension Plan Investment Board (CPPIB).

The sources requested anonymity because the bankruptcy preparations are confidential. Neiman Marcus and Ares declined to comment, while CPPIB representatives did not immediately respond to requests for comment.

Other department store operators that have also had to close their stores are battling to avoid Neiman Marcus’ fate. Macy’s Inc (N:M) and Nordstrom Inc (N:JWN) have been rushing to secure new financing, such as by borrowing against some of their real estate. J.C. Penney Co Inc (N:JCP) is contemplating a bankruptcy filing as a way to rework its unsustainable finances and save money on looming debt payments, Reuters reported last week.

A bankruptcy filing would be a grim milestone that Neiman Marcus has spent the last few years trying to avoid. It pushed out due dates on its financial obligations last year in a restructuring deal with some creditors, though the transactions added to Neiman Marcus’ interest expenses.

A trustee for some of the company’s bondholders sued Neiman Marcus last year, claiming the firm and its owners robbed investors of the value of its luxury e-commerce site MyTheresa by moving the business beyond the reach of creditors in a corporate reshuffling. Neiman maintains its actions were proper.

“In light of the significant headwinds stemming from the coronavirus pandemic and our expectation for a U.S. recession this year, we believe the company’s prospects for a turnaround are increasingly low,” Standard & Poor’s analysts wrote in a note last week.

“We continue to view its capital structure as unsustainable,” the analysts added, lowering their credit rating on Neiman Marcus deep into “junk” territory. They said the move reflected the “elevated potential” of a debt restructuring.

Once it files for bankruptcy, Neiman Marcus could attract interest from potential suitors seeking to pick up the company or some of its assets on the cheap, the sources said.

Saks Fifth Avenue owner Hudson’s Bay Co explored a bid for Neiman Marcus in 2017 but did not pursue it, people familiar with the matter said at the time. The Canadian company was taken private earlier this year by a group of shareholders led by its chief executive Richard Baker, and it is unclear if it remains interested or would be in a position to pursue a new bid.

A Hudson’s Bay representative did not immediately return a request for comment.

FROM FASHION FIXTURE TO BRINK OF BANKRUPTCY

The first Neiman Marcus store opened in Dallas, Texas, in 1907. It was opened by the Marcus and Neiman families, which decided to pursue the retail venture after considering and rejecting an investment in a little-known soft drink at the time called Coca-Cola (NYSE:KO), according to Neiman Marcus’ website.

The company expanded across the United States and in 1972 it acquired New York City’s Bergdorf Goodman, itself founded in the early 1900s, becoming a fashion fixture for celebrities and wealthy customers seeking expensive handbags and clothing.

The coronavirus outbreak has pushed the company to the brink. While it has asked some workers back to closed stores to fulfill online orders, these operations cannot make up for lost sales in physical stores.