Home
Stocks
Need to Know: Why one fund manager sees a wealth bubble putting the property and stock market at risk
Prev Article Next Article
This post was originally published on this site

It was more a terrible than a turnaround Tuesday, after the stock market burped up early gains. Up as much as 4.1%, the Dow Jones Industrial Average DJIA, -0.11% ended 0.1% lower.

There isn’t data available yet, but the 20% downturn for the S&P 500 SPX, -0.16% in the first quarter will put a big dent in household wealth when that data gets published by the Federal Reserve in June.

Niels Jensen, the founder and chief investment officer of London-based investment adviser Absolute Return Partners, said in a monthly letter to investors that wealth has been running too far ahead of the underlying economy for some time.

In the fourth quarter, household net worth to gross domestic product was a record 545%. “If you have followed my writings for a while, you’ll be aware that total wealth in society cannot grow faster than nominal GDP over the long term, and that every country has a well-defined mean value in terms of the wealth-to-GDP ratio. In the U.S., that mean value is 380%. In other words, when the actual wealth-to-GDP ratio deviates too much from 380%, you know that the ratio will mean revert at some point. You just don’t know when,” he said.

Property and equities are the two asset classes most exposed to a decline in wealth, he said.

Jensen acknowledged that you can’t just sit out a bubble. “One lesson I learned in the late 1980s, when Japanese equities were defying all logic for years, was the need to participate in the rally regardless, even if valuations were ridiculous. Clients demanded it, and the boss expected it,” he said. But he says it was “suicidal” not to protect for the downside via put options for when the wheels eventually come off.

He also discussed the current situation, and why European stocks have sold off more than U.S. equities even though he viewed the former as overvalued heading into the pandemic.

“More Europeans have died (so far), resulting in a higher fear factor on this side of the Atlantic, i.e. the impact on risk assets has been bigger,” said Jensen, adding that European markets also are less liquid. “Before we come out on the other side of this crisis, more likely than not, the day will arrive when European equities begin to outperform U.S. equities, just like Chinese equities have outperformed equities from the rest of the world in recent weeks.”

The upturn in the death rate for New York state in particular may have contributed to Tuesday’s stock-market reversal. Analysts at Deutsche Bank note that may be due to a catch up from incomplete reporting over the weekend, and there also was a sizable increase in deaths in the U.K. and France. Globally, there were 1.43 million confirmed cases, leading to 82,195 deaths, according to the tracker from Johns Hopkins.

Tesla TSLA, +5.65% will suspend production at its U.S. factories until at least May 4, cut pay and furlough workers, according to press reports citing an internal memo from the electric-car maker.

The minutes from two unscheduled Federal Open Market Committee meetings are due at 2 p.m. “The tone is likely to convey the extent to which the committee is prepared to ‘use its tools’ to alleviate stress in financial markets and to limit the severity of the COVID-19-triggered recession,” said analysts at TD Securities. 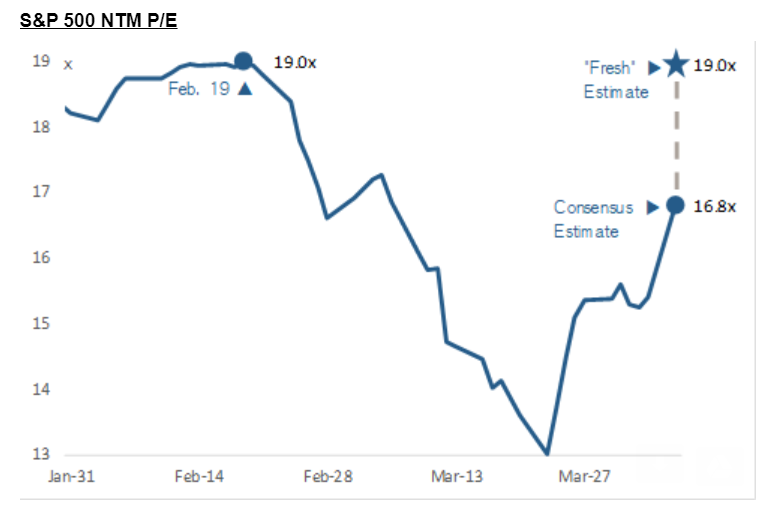 If you only use recently updated sellside earnings estimates — called “fresh” on the chart — then the U.S. is trading at the same multiple to earnings that it did before the pandemic engulfed the financial market, according to Jonathan Golub, chief U.S. equity strategist at Credit Suisse. Golub says it is important to only use recent earnings estimates as earlier ones haven’t fully reflected the impact of the coronavirus pandemic.

The euro EURUSD, -0.21% was a little bit weaker, as European Union finance ministers failed to agree to a spending plan.

Crude-oil futures CL.1, +3.30% swung higher, a day ahead of a critical meeting on a possible cut to production.

One bank during the tumultuous trading of March had to meet a margin call of nearly $10 billion — in an hour, according to the head of the Commodity Futures Trading Commission.

A so-called super pink moon was enjoyed by skywatchers.