Home
Stocks
Dispatches from a Pandemic: ‘Police used rubber bullets to disperse people lined-up outside a grocery store’: As South Africa hunkers down, coronavirus will hit poor residents hardest
Prev Article Next Article
This post was originally published on this site

Johannesburg usually is a city with a soundtrack.

It’s a place where you hear music from passing cars and from businesses with open windows and doors. It’s late summer here and, on most weekends, you’d hear the sound — and smell the smoke — from barbecues, or braais as they’re called here. But now, the streets are quiet.

“It’s business unusual,” according to the radio traffic report. Since Friday at midnight, South Africa has been on lockdown.

People are required to stay in their homes unless it’s “essential” — only pharmacies, grocery stores, banks, gas stations and some convenience stores are allowed to stay open.

Even those stores are barred from selling non-essential items, in one grocery store, sheets of plastic have been hung to block access to wine, cigarettes, dishware and cooking utensils.

Restaurants and liquor stores are closed — even for takeout and delivery — travel between provinces is restricted and going for a jog or walking your dog is now banned. 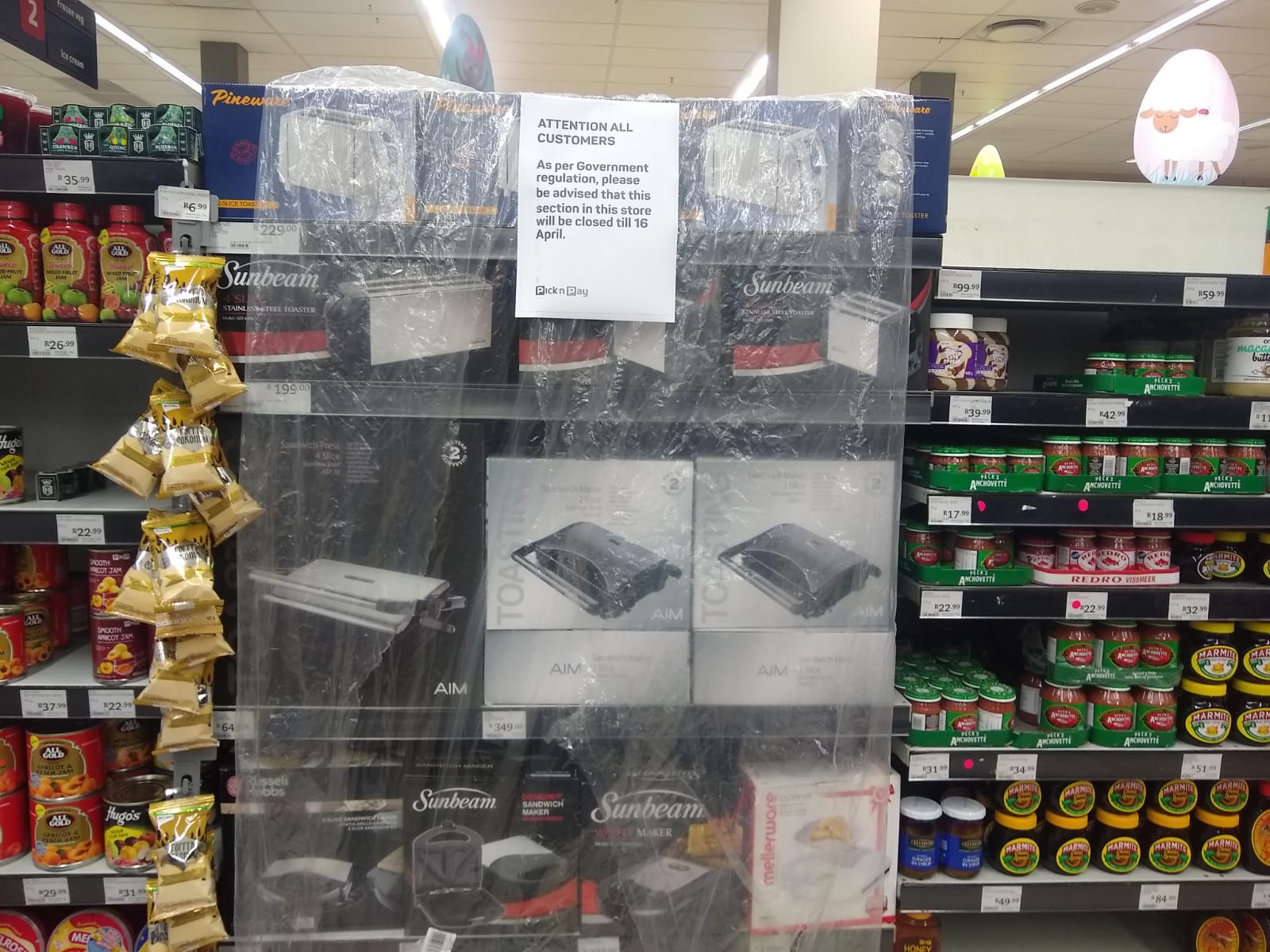 In South Africa, stores have been prohibited from selling non-essential items during the country’s coronavirus lockdown.

The change has been sudden.

COVID-19 arrived in South Africa later than in much of North America and Europe. The first case in the country was reported on March 5.

It would be another 10 days before the country reported its first case of transmission — an announcement made by President Cyril Ramaphosa during a televised address where he declared a “national disaster,” closing schools, banning gatherings of more than 100 people and closing the border to foreigners travelling from “high risk” countries like Italy, China and the United States.

Dispatches from a pandemic: ‘The fates of the refugees and their Jordanian hosts are intertwined.’ What coronavirus means for Jordan — and its Syrian refugee population

It wouldn’t be until Thursday — hours before the drastic measures intended to keep people apart came into effect — that crowded grocery stores would start to see panic buying and liquor stores started to have line-ups out the door.

On Friday, South Africans woke-up not just to a lockdown but also to the news of the country’s first death from COVID-19.

There are now more than 1,000 confirmed cases in the country.

‘We have acted faster and we have acted more decisively than many other more well-resourced countries.’

South Africans can be “quite proud” of their government’s response to COVID-19, according to Mia Malan, the founding editor and director of the Bhekisisa Centre for Health Journalism.

“We have acted faster and we have acted more decisively than many other more well-resourced countries,” said Malan, who praised the level of coordination between government departments.

It’s a far cry from the South African government’s response to the AIDS crisis in the early 2000s, when then-president Thabo Mbeki denied the link between HIV and AIDS.

The current government has turned to scientists, like epidemiologist and infectious diseases specialist Salim Abdool Karim, for advice, rather than condemning them like Mbeki’s government did, according to Malan.

Dispatches from a pandemic: ‘My former career working in disaster zones has prepared me well for situations of challenge and uncertainty’: A former aid worker reflects on coronavirus

Even with unprecedented levels of cooperation between the country’s public and private heath care providers, elected officials have said the country may still be short thousands of ICU beds.

The lockdown is likely to affect Johannesburg’s poorest residents the most.

Across South Africa, around 3 million people live in informal settlements and many more live in substandard housing, which often have limited access to clean water and crowded conditions.

Julia, who sells candy and cigarettes outside a mall near the University of Johannesburg, said that she’s worried about paying rent and feeding her family during the lockdown.

Police and military enforcement of the lockdown appears to be concentrated in the poorest areas — despite credible reports of gated communities in the city’s suburbs flouting the lockdown behind their walls.

On Saturday, police used rubber bullets to disperse people lined-up outside a grocery store in downtown Johannesburg, ostensibly because they were standing too close to each other in line.

And there are other worries, the country’s official unemployment rate is almost 30% and many people depend on the informal economy to survive.

The day before the shutdown, Julia, who sells candy and cigarettes on a street corner outside a mall near the University of Johannesburg, said that she’s worried about paying rent and feeding her family during the lockdown. 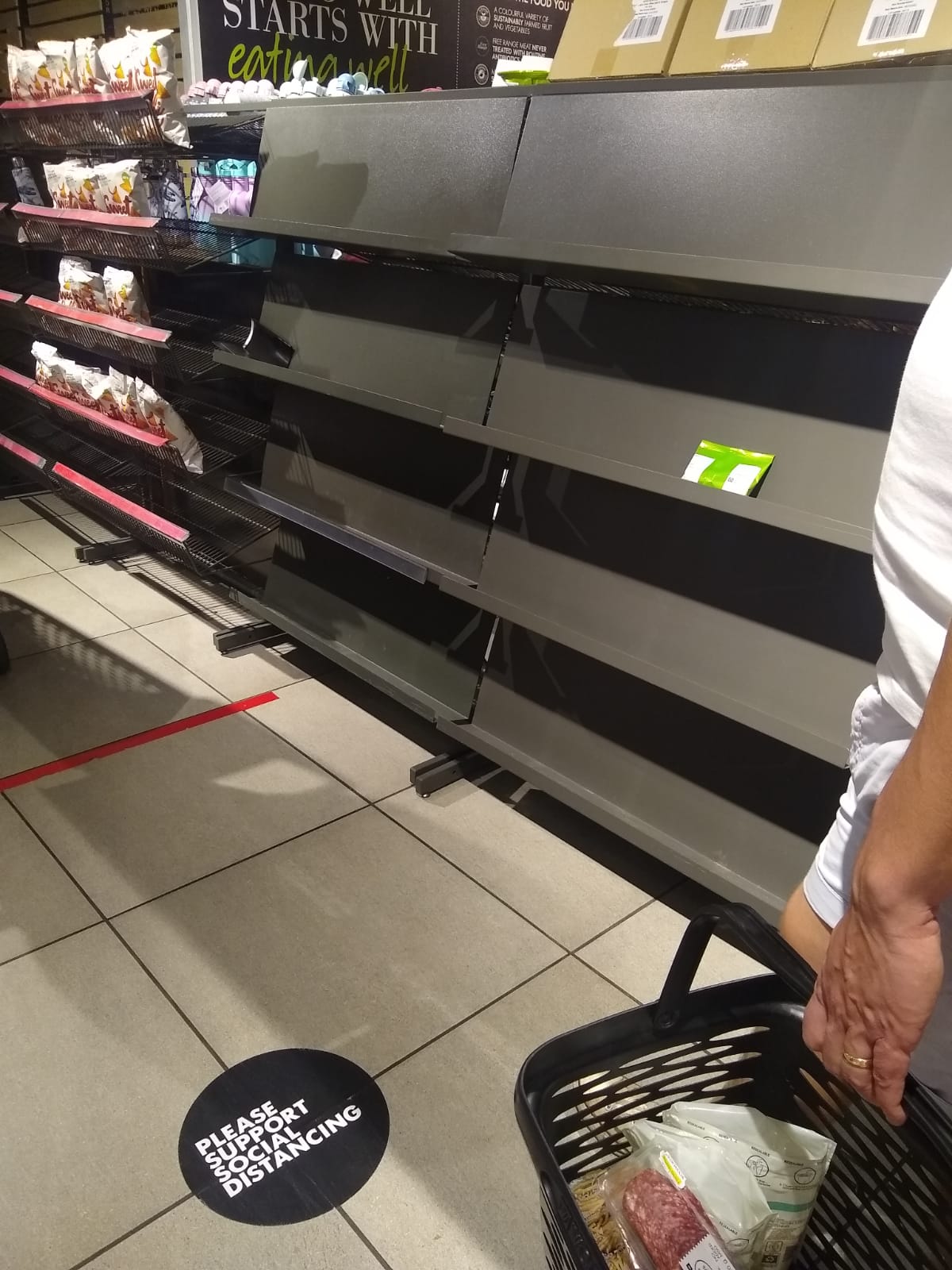 As in other countries, grocery stores have run out of certain food items in South Africa as people scramble to stock up as the country enters a lockdown during the global coronavirus pandemic.

“We are going to suffer,” said the single mother of two.

“If there’s no people walking around, it means I don’t have money to send home, I don’t have anything,” she said.

Most of South Africa’s approximately one million domestic workers are also out of work — and unpaid during the lockdown.

While many workers will be eligible for payments from the government’s Unemployment Insurance Fund, most domestic workers aren’t registered for the fund, said Amy Tekié, the cofounder of the Izwi Domestic Worker Alliance.

Most of South Africa’s approximately one million domestic workers are also out of work — and unpaid during the lockdown. Some have faced pressure to move in with their employers.

“Employers tend to be the safety net for domestic workers, so if the employer isn’t paying, it’s going to be a serious problem unless landlords are willing to ease up for a month or two until people find other work or get back to work,” she said.

Tekié said her group has also gotten calls from domestic workers who have been pressured into moving-in with their employers during the lockdown and felt they couldn’t say no even if means being separated from their own families for three weeks.

South Africa was already in a recession before the COVID-19 outbreak and on Saturday, government bonds were downgraded to junk status by Moody’s Ratings Agency. The CEO of Edcon, a large retail group, recently broke down in tears on a earnings call.

Grocery stores that had seen long lines and large crowds on Thursday were quiet on Saturday, day two of the lockdown, but the panic buying that gripped the city two earlier was still evident.

Fruit, vegetables, meat, shelf-stable milk, eggs and flour were almost completely sold out. One of the fears is that, as has happened elsewhere, the lockdown will be extended beyond three weeks.

On Thursday evening, I called a local pizza shop, hoping to get a last order in before the lockdown. The staff had already gone home, given time to prepare for the lockdown.

Jacob Serebrin is a freelance journalist based in Johannesburg, South Africa.

This essay is part of a MarketWatch series, ‘Dispatches from a pandemic.’