Shares of General Electric Co. fell Monday to their lowest close since 1992, as the coronavirus pandemic’s negative impact on the aviation industry, the company’s health-care business and on interest rates offset any increased demand for equipment used to diagnose and treat COVID-19 patients.

GE said before the open that its GE Aviation unit was planning to cut 10% of its U.S. workforce, citing the “rapid contraction” of air travel resulting from the COVID-19 outbreak. The unit said the temporary lack of work would affect about half of its U.S. maintenance, repair and overhaul employees for 90 days.

Before GE’s aviation announcement, Oppenheimer analyst Christopher Glynn cut his 2020 earnings estimate to 44 cents a share from 55 cents and his revenue forecast to $80.27 billion from $80.63 billion. He said the “key watch item” for the company would be the “degree of pressure” on the aviation aftermarket, which represents a $15 billion business for the company.

“GE Aviation is not alone in the challenges it faces,” Joyce wrote in a note to employees. “For example, GE Healthcare is managing through reduced demand for certain equipment as elective procedures are postponed or canceled around the world.” 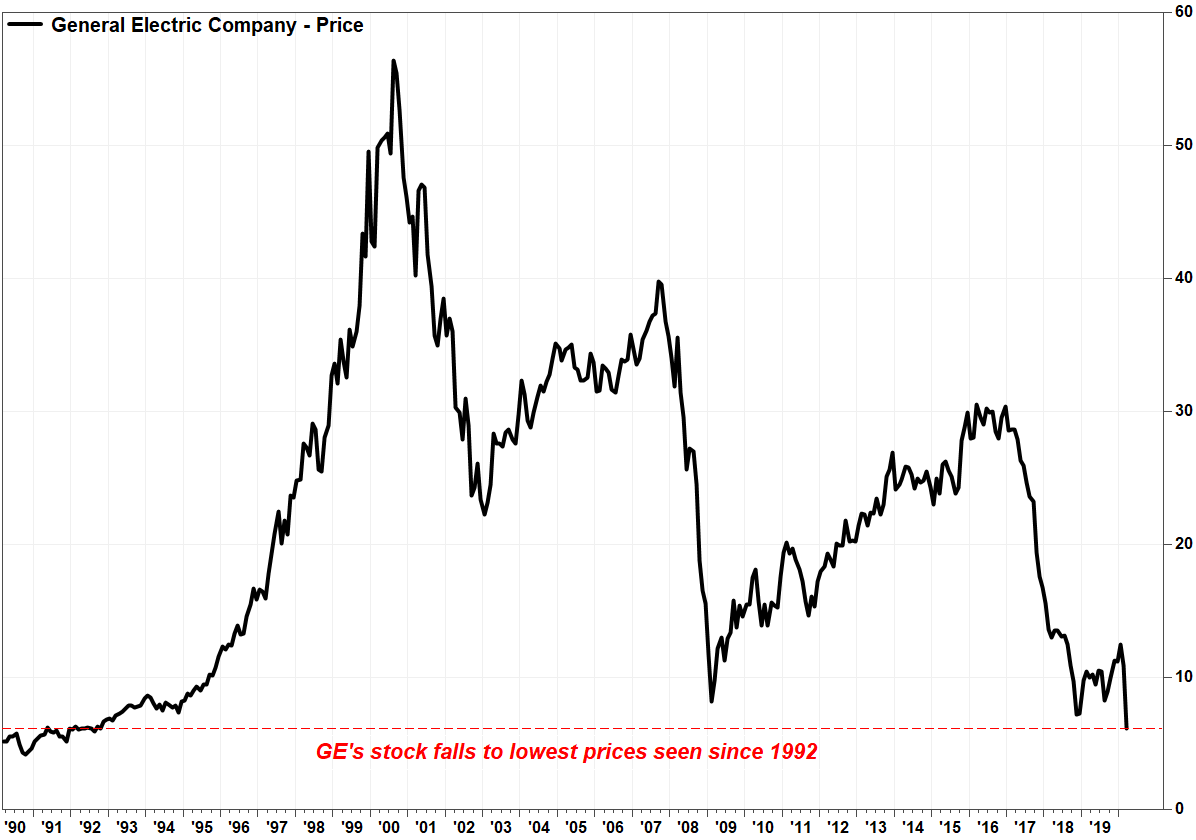 The headwinds for GE Healthcare are only partly offset by the increased demand for ventilators, CT scan and ultrasound devices, mobile X-ray systems and patient monitors. Joyce said another reason for optimism was that the sale of the BioPharma business to Danaher DHR, -1.95%  , which was still expected to close on March 31, “will help solidify our financial position further.”

UBS analyst Markus Mittermaier said GE’s affirming the deal’s closure timeline should act as a comfort to investors, as concerns had been rising in recent weeks that there might be a delay as regulators were being hampered by capacity reductions given the COVID-19 crisis.

“This is an important cash inflow in a time of significant market volatility and economic uncertainty, which will put temporary strains on the operating businesses of GE, especially aviation and to some extent healthcare,” Mittermaier wrote in a note to clients.

Another headwind for GE is how lower interest rates can hurt the company’s long-term care and pension obligations. Chief Executive Larry Culp said earlier this month that every 25-basis-point cut in the discount rate with respect to the pension generates about $2.3 billion of obligation.

Since Culp said that on March 4, the Federal Reserve has lowered its target on benchmark overnight rates by 1 percentage point, and the yield on the 10-year Treasury note TMUBMUSD10Y, -7.75%  has declined by about 0.23 percentage points. See Bond Report.

Talk about bad luck. Culp joined GE as CEO in October 2018, as the company struggled under a massive debt load and hidden liabilities, a negative cash-flow outlook, weakness at a number of business units and then the grounding of Boeing Co.’s BA, +11.17%   737 Max aircraft, which featured engines made by GE.

After closing at a nearly 10-year low of $6.45 in December 2018, Culp had managed to more-than-double the stock price as of last month, only to be undone by the COVID-19 pandemic.

And talk about bad timing. The stock has now lost 45.5% since GE’s last bearish analyst, J.P. Morgan analyst Stephen Tusa, who had rightly called the company’s struggles well before they were manifested in the stock, upgraded the stock on March 2, saying he was wrong to have kept his underweight rating considering how much the stock had outperformed its industrial peers.

Also read: GE’s stock gets a boost from an upgrade by the last bearish analyst.