Home
Stocks
Therese Poletti's Tech Tales: Tech supply chain is recovering from coronavirus, but beware a relapse
Prev Article Next Article
This post was originally published on this site 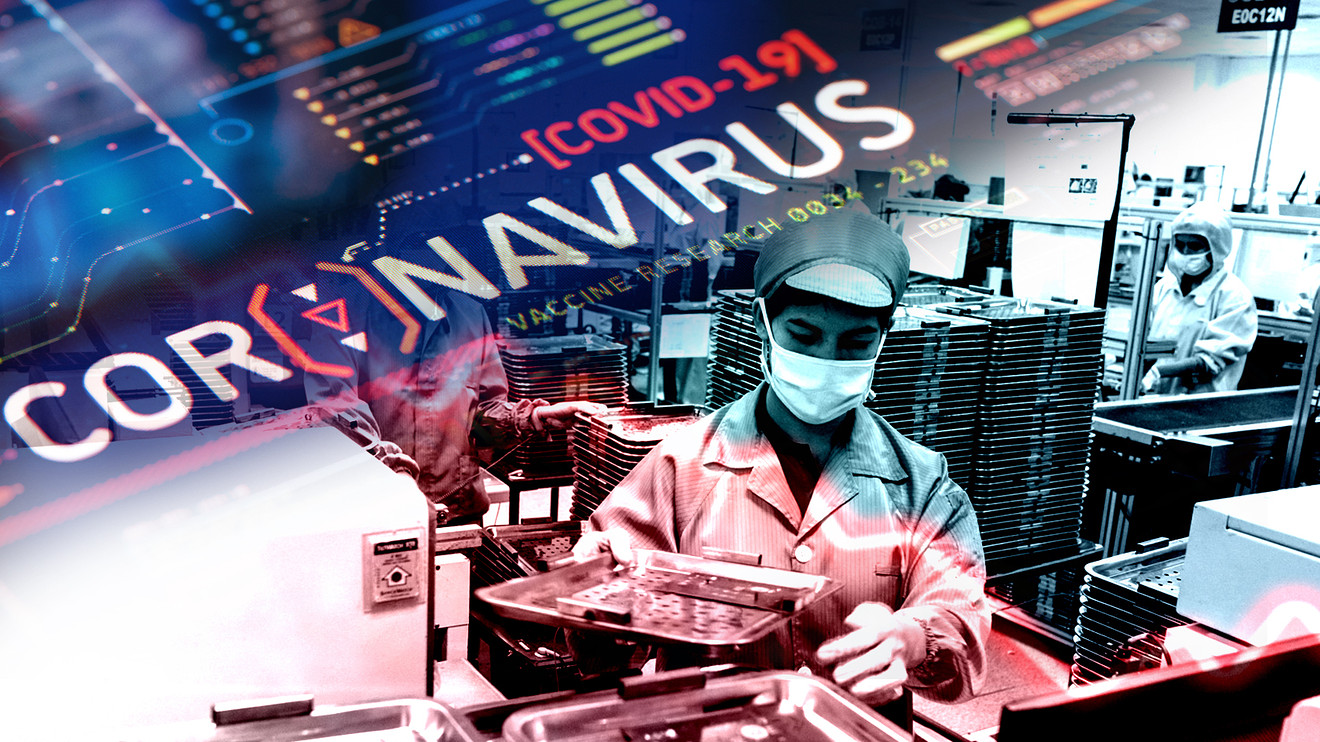 The tech supply chain has begun to recover from the effects of COVID-19 in China, but don’t expect an easy return to normal.

Tech executives breathed a sigh of relief when executives at Foxconn Technology Co. 2354, -3.44%   said the company’s factories in China would be running at their normal pace by the end of March, if the novel coronavirus epidemic does not worsen. That statement from the manufacturer of Apple Inc.’s AAPL, -9.88%  iPhones , of course, contains a big if. But hopes are now high that as the epidemic slows in its Chinese epicenter, a seriously disastrous impact on the global technology supply chain has been avoided so far.

Right now, companies in different parts of the supply chain are predicting that problems in the first quarter could still leak into the second quarter. If things go as planned, investors should expect that most of that revenue will just move to a back-loaded second half.

“When Foxconn communicated that they would have their factories back to 100% capacity by the end of March, that was very encouraging as it relates to Q2 output,” Christopher Stansbury, chief financial officer at Arrow Electronics, Inc. ARW, -9.06%  , told investors at a Raymond James conference last week. “But for Q1, we’re still monitoring it daily and it’s too early to call.”

The direction easily could shift again, though. For tech investors betting on (or hoping for) a rebound, it is important to know that some parts of the supply chain are more automated than others, and the entire complex organism is far from cured. And, as with every industry at this time, a wider spread of the coronavirus could toss everything into more uncertainty.

“We see further risk to numbers and sentiment, with both news flow and revisions likely to get worse before they get better in the near to medium term,” Bernstein Research analyst Stacy Rasgon, who covers many semiconductor giants, wrote in a note Tuesday.

The global supply chain for technology products is a vast and complex operation, sprawling continents and involving many different steps in the process, depending on the individual product. In general, the first phase is the raw materials and the manufacturing of semiconductors and other electronic components that are the core brains and memories of the devices, which moves from a largely automated manufacturing process to assembly and test services, and then typically onto printed-circuit-board assembly. That is one of the most labor-intensive processes, where workers stand side by side in massive factories putting or hand-soldering components onto the printed circuit boards before sending them to be tested again and packaged for shipping.

More from Therese: Twitter is spending $2 billion to save Jack Dorsey’s part-time job — for now

With so many people working in the large assembly factories, such as Foxconn, which employs over 800,000 workers, “the lines could be shut down for as many as 30 days based on single case of coronavirus on that line,” Futurum Research principal analyst Daniel Newman said. Foxconn executives said they are taking many precautions to avoid employees from getting infected by COVID-19 at their factories.

“The problems first came out in the part of the supply chain that is very labor-intensive, which is less automated than you think it would be. It still has a very human element,” said Eric Ross, an analyst with Cascend Securities who has been following the multiple elements of the supply chain disruption. “The weakness is people, not components.”

Many of the stocks of contract manufacturing companies have taken double-digit hits amid the ongoing market meltdown over the coronavirus, steeper than the overall drop in the S&P 500 SPX, -9.51%. Jabil Inc. JBL, -14.06% — which announced in late February that its factories, “which have been adversely impacted by the virus, are now running at roughly 65-70 percent capacity” — and Sanmina Corp. SANM, -16.79%  have seen the steepest drops. Hon Hai Precision Industry Co. Ltd. 2317, -0.13% , aka Foxconn Technology Co., has not fallen as steeply. Flex Ltd. FLEX, -14.07% US:FLEX reminded analysts on its call at the end of January that it has been diversifying its factories, and it did not have a factory in China’s Hubei province, the epicenter of the virus.

Downstream from those companies, the story gets more convoluted, with the market demand being the additional issue at the end of the supply chain. Semiconductor and other component makers, even though they are in the eye of the storm, are faring well for now. But a promised recovery of the semi industry in 2020 may be delayed. Demand for end products, like PCs and smartphones, has slowed down, based on some comments from Lenovo Group, 992, -1.15% , HP Inc., HPQ, -9.56% Apple and Microsoft Corp. MSFT, -9.48%.

See also: These nine companies are working on coronavirus treatments or vaccines — here’s where things stand

Three factors have helped keep the availability of most semiconductor components readily available. After the tariffs on Chinese-made goods last year, many original equipment manufacturers stocked up their inventory of chips and other components in the event of higher tariffs. In addition, in anticipation of the annual week-long shutdown of factories for the Lunar New Year in Asia, many companies built up an inventory of chips, which came in handy in the past two months.

Applied Optoelectronics AAOI, -19.32%  had an increase in inventories in the fourth quarter “mainly driven by inventory buildup ahead of the Lunar New Year,” CFO Steffan Murry said on a conference call. “Although this was planned, we believe this extra inventory will be useful to us, as we continue to recover normal operations following the coronavirus shutdown.”

Another reason semiconductors have not been hit as hard by manufacturing shutdowns yet is that the massive multi-billion dollar factories to make chips are now largely automated, with fewer human workers heavily outfitted in all-encompassing clean-room suits and masks to prevent any contamination of human skin or hair onto the products.

The end of the chain, consumer demand, is the biggest concern as factories start to improve their output. Consumers, depending on where they are located, for the most part do not have tech gadgets at the top of their list amid concerns about a potential pandemic, unless they are looking for a better computer to work from home.

For more: With Microsoft’s coronavirus warning, PC and hardware makers are probably next

All forecasts, for the moment, are moving targets. In late February, market research firm IDC lowered its outlook for the worldwide PC market, and said it expects PC unit shipments will fall 9%, due to a combination of the Windows 10 transition and the hampering of supplies due to the coronavirus. That is down from slight growth of 2.7% in 2019, but could change more as events happen.

“We began in mid-February so our information is from mid- to the end of February,” IDC analyst Jitesh Urbani said. “Two changes have occurred — Iran and Europe were not as big an issue than as they are today. That alone will probably effect demand in those areas, and further bring down the market.” Urbani said those numbers could possibly change again. “It’s a situation that is rapidly changing.”

Wedbush Securities analyst Daniel Ives issued a note Monday with data from the Academy of Information and Communications Technology, indicating that Apple sold about 500,000 iPhones in February in China, compared to 1.27 million from the year-ago period. “It’s what people purchased,” Ives said. “It’s not an exact science but it’s down more than 50%.” He said that in a 90-day quarter so far, there were “about 15 to 20 days with some semblance of normal demand in China, before the Lunar New Year.”

IDC is also looking for smartphones in general to decline, forecasting that the worldwide smartphone market will again decline in 2020. Its current forecast is for a drop of 2.3% in unit sales, compared with a drop of 1.3% in 2019, with the coronavirus having the biggest impact on the first half, when shipments are expected to drop 10.6% year over year in the first six months of 2020. The Chinese domestic smartphone market is expected to fall about 40% in the first quarter, IDC forecast.

Last year, many tech companies, especially in the semi sector, promised a better second half, as tariffs on China and inconsistent purchasing from data-center providers hurt their revenue. Investors have seen the scenario of the “better second half” before, but this time it’s a global virus that some have compared with the Spanish influenza pandemic of 1918. Another outbreak in China, where the virus appears to now be contained, and all bets are off.

“There is so much that can change from now,” said Gerrit Schneemann, a senior analyst at Omdia. “A renewed outbreak somewhere else in China, then we are back to square one…I’m pretty sure that even though it seems to be sort of under control, it doesn’t mean that it can’t flare up again.”