Home
Stocks
Project Syndicate: Fear is the virus that’s really dangerous
Prev Article Next Article
This post was originally published on this site 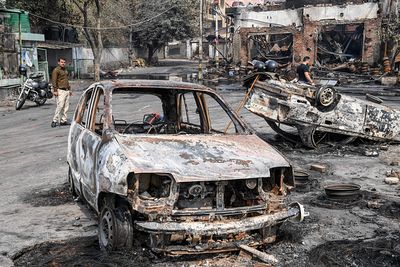 Rumors spread, and were often repeated in the mainstream press, accusing Koreans, a despised and poor minority, of planning to take advantage of the disaster by starting a violent rebellion. Japanese vigilantes, armed with swords, bamboo spears, and even guns, then set upon anyone who sounded or looked Korean.

“ The panic that often occurs during a health crisis or in the aftermath of a natural disaster can — and has — led to spasms of irrational violence. ”

Up to 6,000 people were murdered as police looked on and sometimes took part.

This was not some uniquely Japanese phenomenon. Mobs massacring unpopular minorities remain all too common. When Hindus started killing Muslims in Delhi recently, the Indian police were as passive, or as culpable, as the Japanese authorities were in 1923.

One need not go far back in European or American history to find similar, or even worse, cases of lynching and mass murder.

Irrational violence often arises from panic. And panic can easily occur during a health crisis or in the aftermath of a natural disaster. Lack of truthful public information can lead to conspiracy theories, which become lethal when politicians or the media deliberately stir them up.

In Japan in 1923, the Ministry of Home Affairs told policemen to watch out for Koreans who seemed to be looking for trouble. In Delhi, a local politician of the ruling Bharatiya Janata Party, Kapil Mishra, incited people to violence by promising to send in mobs to break up a peaceful Muslim protest if the police didn’t crack down hard first.

Could the current panic about the new coronavirus disease, COVID-19, have similar consequences? Fortunately, there have been no massacres so far. But the behavior of some politicians has been disturbing, to say the least.

In Italy, Matteo Salvini, the far-right opposition leader, said that migrants were a threat to the country as carriers of the virus, and criticized the government for rescuing a number of African refugees. Right-wing nationalists in Greece are calling for concentration camps for refugees to protect the population from infection.

And then there is President Donald Trump. His main worry is that panic about COVID-19 will hurt the stock markets. So, the first thing he did was to accuse his political opponents of “politicizing” the epidemic. This clearly is not the best way to keep the public properly informed, and it provides a solid basis for conspiracy theories.

Trump’s son Donald Jr. went further, and proclaimed that Democrats were hoping the disease would kill millions of people just to drag his father down. Tom Cotton, a Republican Senator from Arkansas and a possible future presidential candidate, repeated debunked speculation that the Chinese government had manufactured COVID-19 as a bioweapon.

Such absurdities are sometimes softened a little when they cause too much of a public outcry. But the damage is already done. A friend in New York observed last week how a large white male accosted two Asian-looking women, telling them he hoped the coronavirus would kill them, “just like we did to your people in Hiroshima.”

This man was clearly unhinged. One would hope that most Americans, including most white male Americans, would be appalled by such behavior. The problem is that when well-known senators and other high officials start peddling malicious conspiracy theories, unhinged people feel permitted to say and do things they might normally not.

It doesn’t take many unhinged people to form a violent mob.

This is why it is wrong to dismiss people who go on murder sprees in the name of a racial, political, or religious ideology as simply mad loners. Figures like Anders Breivik, who murdered 77 people in Norway in 2011 as part of his war to save the West from Marxists, multiculturalists, and Muslims, may indeed be lone operators.

But the people who spread conspiracy theories that inflame the minds of such killers bear at least some responsibility. The same goes for Muslim extremists who call for a holy war on wicked infidels, or politicians who claim that refugees carrying terrible diseases are threatening their countries.

COVID-19 is a threat, like all illnesses that can lead to pandemics. And yet Trump tried to slash the budget for the Centers for Disease Control and Prevention and has not replaced the National Security Council teams responsible for pandemic response. The president and his supporters don’t trust experts, and the man appointed to lead the fight against the coronavirus, Vice President Mike Pence, is skeptical about science.

But science, not prayers, will be needed to contain a disease that threatens the globe. Building big walls or pushing people into concentration camps, apart from being inhumane, are not effective remedies.

And using the crisis to incite hatred could have deadly consequences. What is needed is expertise, international cooperation, and words from our political leaders that seek to calm fears. Unfortunately, in too many parts of the world, we are seeing the exact opposite.

This article was published with permission of Project Syndicate — The Virus of Fear.

Ian Buruma is the author of numerous books, including “Murder in Amsterdam: The Death of Theo Van Gogh” and the “Limits of Tolerance, Year Zero: A History of 1945,” and, most recently, “A Tokyo Romance: A Memoir.”