Home
Stocks
As Mike Bloomberg says he’ll release ex-employees from NDAs, here’s why you should be VERY careful about signing one
Prev Article Next Article
This post was originally published on this site 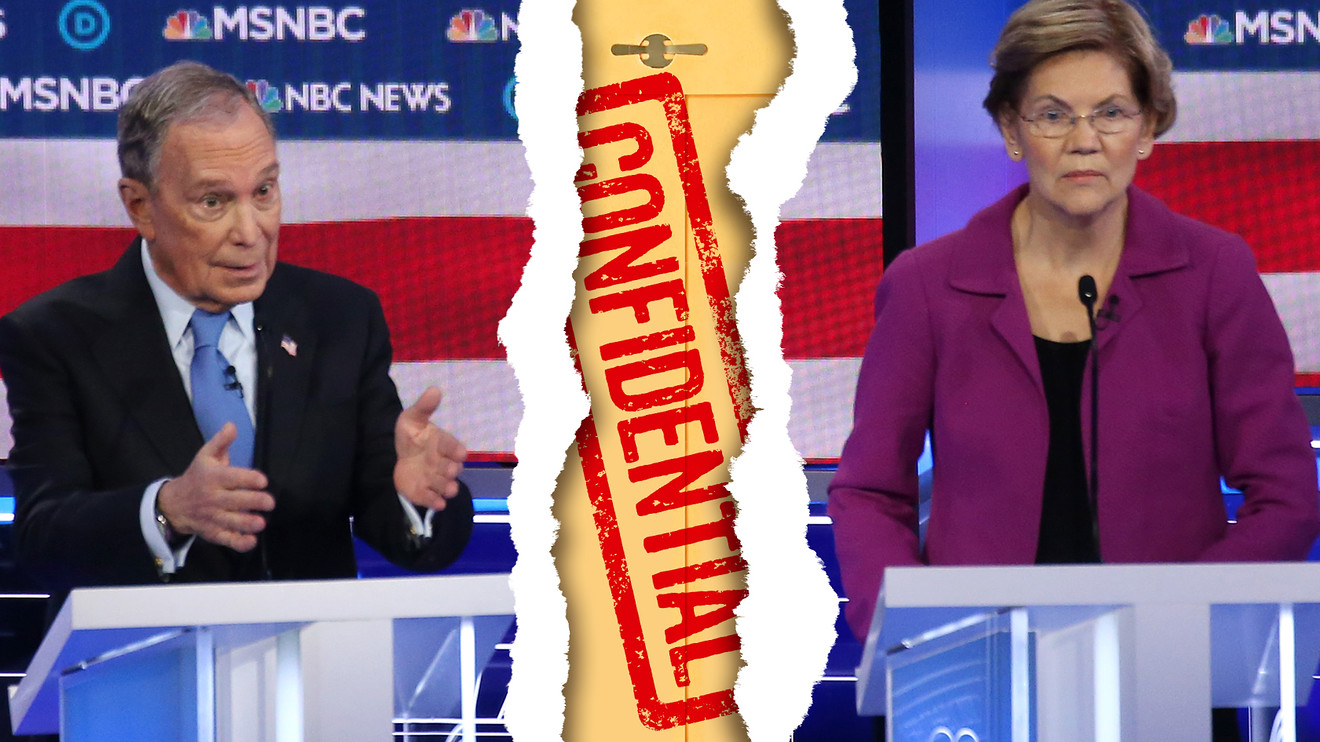 The billionaire said in a statement that his namesake company had identified three NDAs signed with women over more than three decades “to address complaints about comments they said I had made.” Those women would be released from the confidentiality agreements if they contacted the company, he said.

“I’ve done a lot of reflecting on this issue over the past few days and I’ve decided that for as long as I’m running the company, we won’t offer confidentiality agreements to resolve claims of sexual harassment or misconduct going forward,” Bloomberg said.

“I recognize that NDAs, particularly when they are used in the context of sexual harassment and sexual assault, promote a culture of silence in the workplace and contribute to a culture of women not feeling safe or supported,” he added. “It is imperative that when problems occur, workplaces not only address the specific incidents, but the culture and practices that led to those incidents. And then leaders must act.”

After ABC News DIS, -1.00%  reported on lawsuits alleging that the billionaire had created a hostile work environment at his company with sexist comments, ex-employees told the outlet they couldn’t speak publicly due to confidentiality agreements and concerns about retribution. Bloomberg, who declined to release the women from those agreements at the time, has denied the allegations in the lawsuits.

On Wednesday, after debate moderators brought up Bloomberg’s past remarks about women, the businessman said he had “no tolerance for the kind of behavior that the #MeToo movement has exposed” and highlighted various women he had placed in leadership positions in his company, foundation and city government.

Warren, in turn, zeroed in on the NDAs.

In some cases, hush agreements will include non-disparagement clauses that bar someone from saying negative things about the other people who formed the agreement.

“What we need to know is exactly what’s lurking out there. He has gotten some number of women, dozens, who knows, to sign nondisclosure agreements both for sexual harassment and for gender discrimination in the workplace,” she said. “So, Mr. Mayor, are you willing to release all of those women from those nondisclosure agreements so we can hear their side of the story?”

Bloomberg replied that there were “a very few nondisclosure agreements,” without specifying an exact number.

“None of them accuse me of doing anything, other than maybe they didn’t like a joke I told,” he said. “There’s agreements between two parties that wanted to keep it quiet and that’s up to them. They signed those agreements, and we’ll live with it.”

Trump has denied the affair, and said he did not know about the payment at the time, although the president has given conflicting statements on the scandal.

Many women have also said they were required to sign non-disclosure agreements as part of the settlements they reached with Harvey Weinstein related to allegations of sexual assault and harassment. Olympic gold medalist McKayla Maroney also said she signed one as part of a settlement following sexual abuse by USA Gymnastics team doctor Larry Nassar, who as convicted on charges of sexual abuse and child pornography and sentenced to 125 years in prison.

Here is what employees — and voters — need to know about these agreements:

What are nondisclosure agreements and how do they work?

These sorts of agreements can go by many names, said Donna Ballman, an employment lawyer and author of the book “Stand Up For Yourself Without Getting Fired.” “Nondisclosure, hush, confidentiality — no matter what you call it, they are probably the same thing,” Ballman said.

The agreements generally bar one or more parties from disclosing the terms of a settlement. Generally, they will describe what information a person can and cannot discuss publicly, and over what period of time the agreement is valid.

A forced-arbitration clause is a clause dictating disputes should be resolved by private and confidential arbitration rather than being aired in a public court.

In some cases, hush agreements will include non-disparagement clauses that bar someone from saying negative things about the other people who formed the agreement, Ballman said.

While most recent examples have involved instances of sexual harassment or assault, they can be used for a variety of settlements. Ballman said consumers were most likely to encounter them in product liability settlements or as part of severance packages.

Start-ups and inventors may use these agreements to prevent them from revealing proprietary information, while researchers may employ them among participants in studies. Public figures may use them for domestic staff, including housekeepers and even babysitters.

What should you know before signing an NDA?

For starters, be wary of an overbroad agreement, employment attorney Debra Katz previously told MarketWatch. If an NDA seems less like an effort to protect confidential company intel, and more geared toward muzzling the employee from speaking out about improprieties, that should raise a red flag, she said.

Another warning sign, according to Katz: “Agreements that go on in perpetuity, so the employee can leave and for the rest of his or her life be precluded from ever saying anything negative about that employer.”

An NDA that prevents an employee from bringing illegal discrimination or harassment claims to the Equal Employment Opportunities Commission or SEC would be unenforceable.

Check the NDA’s liquidated damages provision, Katz added. Liquidated damages specify a cash amount that the employee must pay per breach of an NDA, she said, and no reasonable lawyer should counsel their client to agree to such a provision that’s grossly disproportionate to the settlement amount.

Look out for a forced-arbitration clause, or a clause dictating disputes be resolved by private and confidential arbitration rather than being aired publicly in a court of law, employment attorney Paula Brantner, the president and principal of the firm PB Work Solutions, previously told MarketWatch. Employees are less likely to win in mandatory arbitration than they are in litigation, according to a 2014 Cornell University survey of attorneys.

Verbal agreements don’t count, said Brantner, so if the written agreement deviates from what you’ve been told, clarify the discrepancy. An NDA that prevents you from bringing illegal discrimination or harassment claims to the Equal Employment Opportunities Commission or Securities and Exchange Commission would be unenforceable, Katz said, so complaining to the authorities is still fair game.

What happens when you break one?

In Daniels’s case, the adult-film actress appeared to be looking to have the agreement thrown out so she could tell her story. But experts at the time suggested that Daniels’s approach might not be particularly fruitful for the average consumer.

Daniels, whose real name is Stephanie Clifford, argued the NDA was invalid because Trump himself had not signed it; only Daniels and Trump’s lawyer Michael Cohen had signed it.

Her March 2018 lawsuit against Trump and Cohen to invalidate the NDA was thrown out of federal court by a judge in March 2019; the judge said there was nothing left to litigate as the president’s lawyers had already said they would not seek penalties from Daniels for breaking the NDA.)

“That is rarely considered a real defense because most employers will quickly produce a signed copy,” Ballman said. “But if there was a breach on the other side, that may well mean she’s no longer obligated to comply.”

First and foremost, breaking one of these agreements often has financial implications — and many agreements will have specific “liquidated damages” clauses, Ballman said. If someone entered into an NDA as part of a settlement, the affected party could sue to get the money back and possibly for additional damages.

Daniels, her then-lawyer Michael Avenatti told CNN, had allegedly been threatened with a $1 million fine for every appearance in relation to the alleged affair.

In some states, violating a confidentiality agreement means the non-breaching party no longer has to follow the agreement’s directives. Breaching an NDA can lead to getting fired if it’s part of an employer’s contract. In rarer cases, it can result in jail time if a court finds that the breach constituted theft of proprietary information.

Should I avoid signing a hush agreement?

The Weinstein scandal prompted many to question the use of nondisclosure agreements, particularly in the context of sexual harassment.

Consumers should be aware of their rights before signing such agreements. The National Labor Relations Board believes that non-disparagement provisions that prohibit employees from criticizing a company’s executives publicly are an unfair labor practice. Federal civil-rights law supersedes settlements that seek to prevent someone from filing sexual harassment charges, which means you may still be able to file a sexual harassment lawsuit even if you’ve signed an NDA.

Ultimately, a consumer should seek legal counsel and carefully weigh what information would have to remain confidential under such an agreement and what effects that could have.

“Contrary to NDAs that permit parties to do business together or protect proprietary rights, NDAs that hide harassment withhold crucial information from the profession and the public,” Annie Hill, an assistant professor at the University of Minnesota, wrote regarding the Weinstein allegations.

This story was originally published Feb. 20, 2020, and has been updated.