Home
Stocks
Rex Nutting: Hiring in blue-collar industries has slowed to a trickle in the U.S.
Prev Article Next Article
This post was originally published on this site

Donald Trump made the restoration of blue-collar jobs in goods-producing industries a central theme of his presidential campaign in 2016.

He campaigned in the hard-hit factories, mines and logging towns of the Midwest and the South. He promised he’d bring back coal-mining jobs and factory jobs from Mexico and China.

And he bragged about the blue-collar boom in his State of the Union address earlier this week.

Vast numbers of manufacturing jobs in Pennsylvania have moved to Mexico and other countries. That will end when I win!

For a while in 2017 and 2018, the economy was doing a little of what he promised. Employment in construction, mining, logging and manufacturing industries ramped up sharply in his first two years in office, according to the latest figures released today by the Bureau of Labor Statistics.

Some blue-collar jobs did come back, but not nearly as many as had been lost. 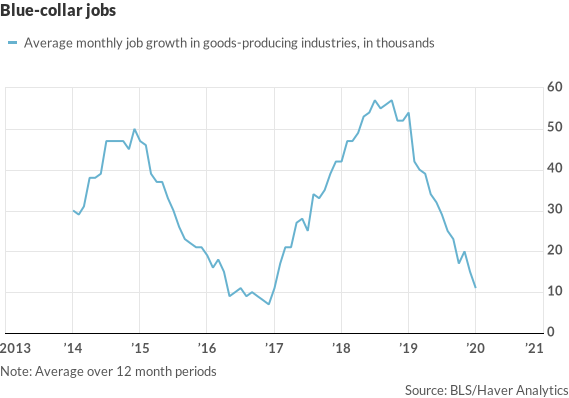 And then, crippled by Trump’s trade war and the collapse in business investment, job growth in those sectors slowed to a trickle over the past year. Meanwhile, job growth in the services-producing industries has actually strengthened, especially in health-care and in professional and technical services, the quintessential pink-collar and white-collar jobs.

In the middle of 2018, fully 30% of all new jobs created by private companies were in the goods-producing industries, even though those industries account for only a little over 16% of total private jobs.

But now the goods-producing industries are creating only 7% of the new jobs.

With slower job growth came slower wage growth. Weekly paychecks in production and non-supervisory jobs in those industries are up just 1% in the past year, far short of the rise in the cost of living. Paychecks were growing a healthy 4% during the good times of 2017 and 2018.

In the key battleground states of Pennsylvania, Michigan and Wisconsin, where Trump won the 2016 election, very few of the lost manufacturing jobs have been restored. Manufacturing employment fell in all three states in 2019.

The administration has high hopes that the new North American trade deal will boost employment in auto manufacturing by 76,000 over five years, but outside experts say the employment effects of the deal will be modest.

Hiring in the goods-producing industries is now not much stronger than it was in 2016, when Trump was complaining about how terrible it was. This is a number to watch between now and November.

Rex Nutting is a MarketWatch columnist.