Home
Stocks
Capitol Report: The U.S. created 514,000 fewer jobs in 2018-19 than originally reported — here’s what that means
Prev Article Next Article
This post was originally published on this site 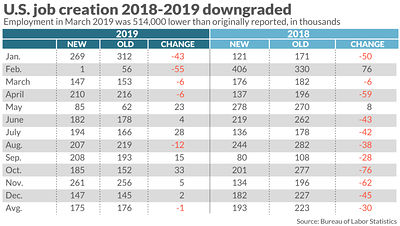 The U.S. economy created about a half-million fewer jobs in 2019 and 2018 than it first appeared, but it doesn’t mean the labor market isn’t strong.

The government as expected pruned the level of overall U.S. employment by 514,000 as of March 2019, with almost all of the reduction coming in 2018.

A big surprise? No. The U.S. Bureau of Labor Statistics previewed the cut last summer, as it always does.

Typically, the government has tended to underestimate job creation in the early stages of an economic recovery and overestimate the level of hiring late in a business cycle. Yet while the latest revisions are larger than usual, they aren’t especially so.

What does it all mean? Not much.

Democrats were quick to point out the reduced employment numbers in 2018 mean that President Trump has failed so far the match the job gains that took place under Barack Obama.

“In the first three years of his administration, 1.5 million fewer jobs, or 42,000 per month, have been added than in the last three years of the Obama presidency,” said Rep. Don Beyer, the Democratic vice chairman of the Joint Economic Committee.

Yet economists point out that hiring is always stronger at the beginning of a recovery and that it slows the longer an expansion continues. That’s exactly what’s happened.

What’s more, there simply aren’t as many people to hire with the unemployment near a 50-year low of 3.6%, millions of baby boomers retiring and the flow of immigrants having been reduced.

What’s surprising to economists is that hiring has remained as strong as it has with the U.S. almost 11 years removed from the last recession. By most measures, the labor market is as strong as now as it has been in decades.

“Even this deep into an expansion, job growth remains notably broad based across private sector industry groups, which is a sign that the expansion has further to run, even if it does so at a slightly slower pace,” said chief economist Richard Moody of Regions Financial.