Home
Market
Airlines scour the world for scarce 737 MAX simulators
Prev Article Next Article
This post was originally published on this sitehttps://i-invdn-com.akamaized.net/trkd-images/LYNXMPEG0L0DA_L.jpg 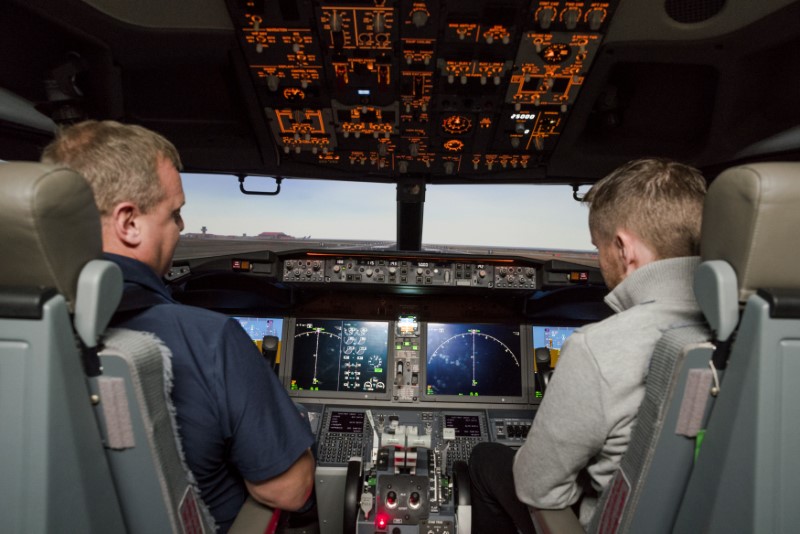 © Reuters. An inside view of the Icelandair Boeing 737 MAX training simulator in the TRU Flight Training Iceland in Reykjavik

MONTREAL/SYDNEY/WASHINGTON (Reuters) – Airlines are scrambling to book time in 737 MAX training facilities as far afield as Fiji, Iceland and Panama, operators said, after Boeing (NYSE:) Co recommended pilots be trained in one of the few simulators replicating the latest model.

That means thousands of pilots from more than 54 airlines need to squeeze into about three dozen 737 MAX simulators around the world before they can fly the plane.

“Boeing is recommending that all 737 MAX pilots undergo training in a 737 MAX simulator prior to flying the aircraft in commercial service,” the company told Reuters on Tuesday evening, the first confirmation of its new policy.

On Jan. 7, the company had recommended using a simulator but did not specify what type.

The 737 MAX has been grounded since March 2019 after two fatal crashes and cannot return to service until regulators approve software changes and training plans.

The estimated 34 737 MAX simulators in service, produced separately by CAE Inc and Textron (NYSE:) Inc’s simulator and training division TRU, are less than a quarter of the number of older 737 NG simulators certified by U.S. and European regulators.

“I think that what a shortage of simulators will mean is the fleet of MAXes will start flying more slowly than what the airlines would like,” said Gudmundur Orn Gunnarsson, managing director of TRU Flight Training Iceland, a joint venture between Icelandair and Textron’s simulator and training division.

“In the beginning it was said that simulator training would not be needed,” he said. “This changes it totally.”

Gunnarsson said TRU Flight Training Iceland had more inquiries than usual from potential airline customers about the use of its 737 MAX simulator since Boeing’s Jan. 7 announcement.

Boeing said on Tuesday it did not expect to win approval for returning the 737 MAX to service until mid-year, longer than previous estimates, in part because regulators are working on new pilot training requirements.

Many airlines did not order 737 MAX simulators, assuming they could rely on the older 737 NG simulators because the types were so similar.

High demand for 737 MAX simulators has led the Montreal-company and its rival TRU to produce simulators for customers they have yet to line up.

“Customers are making increasing inquiries from all over the globe,” a TRU spokeswoman said.

South Korean low-cost carrier Eastar Jet, which does not have a 737 MAX simulator, said it had already contacted Boeing, other airlines and training centers.

“With limited MAX simulators available, we expect carriers will likely face challenges to book slots for MAX simulators,” said an Eastar official, who was not authorized to publicly discuss the matter and spoke on condition of anonymity.

Fiji Airways spent more than $10 million to buy a 737 MAX simulator to help save on the costs and lost productivity of sending pilots to Singapore, Australia and the United States for training, said its chief operating officer, Paul Doherty.

The carrier uses its simulator 35% to 42% of the available hours to train its 70 737 pilots and had plans to sell the additional time. Now it is getting calls from airlines thousands of miles away.

“We have got interest … particularly from Asia,” Doherty said. “We are expecting some from the U.S. Our focus is to really develop our own pilots and to provide the best for Fiji Airways, but we are also very happy to help other airlines that need some time. That could be a real choke point, I think, for a lot of airlines.”

Panamanian carrier Copa Holdings SA, the only Latin American airline with a 737 MAX simulator, said it was seeing a lot of demand, although it was not authorized to disclose the interested carriers. Copa said it its top priority was to train its own 245 pilots.

U.S. airlines have more simulators than many of their counterparts abroad, but they also have more 737 pilots to train, which could be done in stages.

Before Boeing’s recommendations for simulator training, Southwest Airlines (NYSE:) Co, the world’s largest 737 operator, had estimated it would take about 30 days to train all of its roughly 10,000 737 pilots on the MAX.

On Tuesday, the Dallas-based carrier said it would be premature to make cost and timing estimates before regulators approved a training package.

The airline said it has three simulators in various stages of FAA certification and expects to receive an additional three in late 2020.