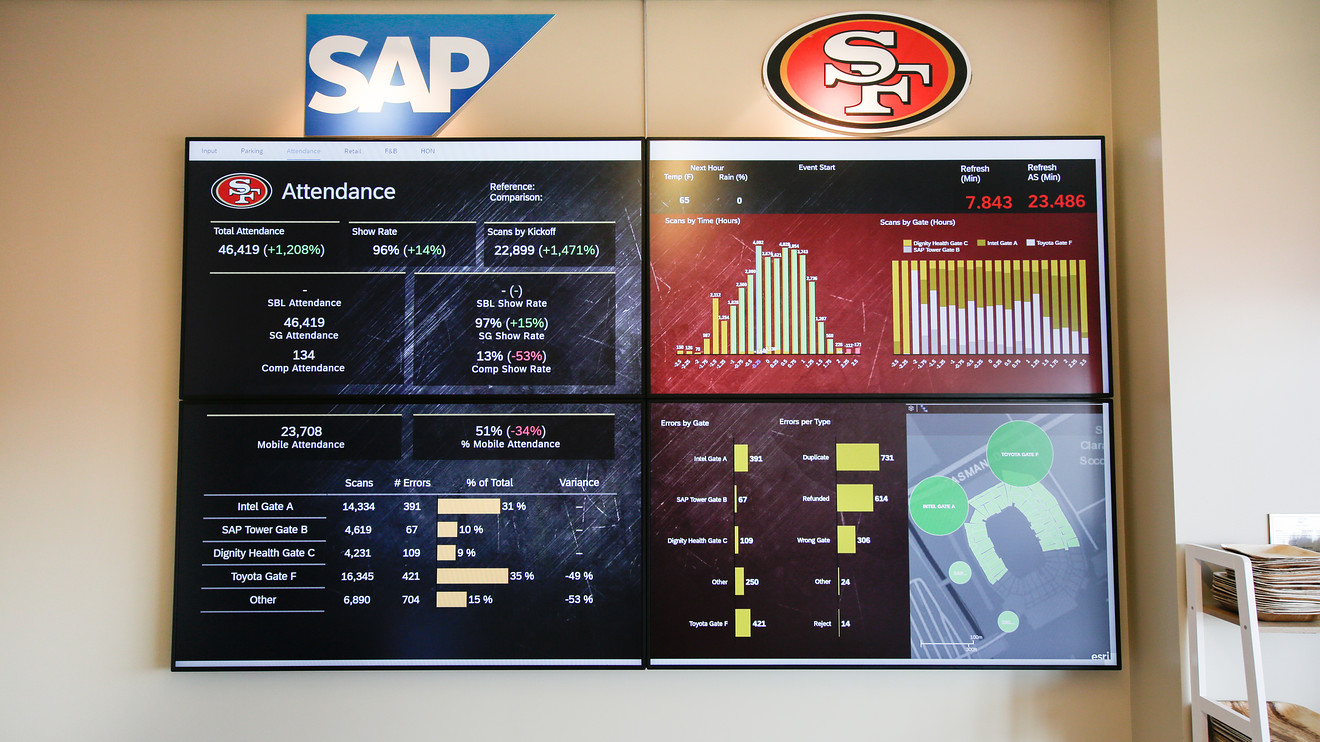 SANTA CLARA, Calif. – It’s 2½ hours before kickoff of the NFC Divisional playoff game vs. the Minnesota Vikings, and a San Francisco 49ers official is vigilantly eyeing a digital dashboard tracking the inner workings of Levi’s Stadium.

Numbers flash across the board like something out of an air-traffic control tower. If the numbers show a parking lot rapidly filling up, attendants are notified and divert cars to an adjacent lot. An app, appropriately called HappyOrNot, collects real-time feedback from fans at concession stands, restrooms, and other locations. Should a trouble spot pop up, stadium employees are deployed to fix it.

Welcome to SAP Executive Huddle, a one-of-its-kind operation for a North American professional sports team. Built on top of data collected by SAP AG’s SAP, -0.62%  analytics cloud and resembling an air-traffic control room, it is housed in a suite at Levi’s amid popcorn, drinks, and assorted snacks.

“It is a perfect marriage” of technology and customer feedback at a major sporting event, 49ers President Al Guido told MarketWatch in a one-on-one interview from the football field on Saturday. “It starts with the infrastructure at a new venue. We’re lucky to be close to tech companies that allow us to do this.”

The 49ers, who moved into 70,000-seat Levi’s Stadium in 2014, have increasingly highlighted its technological capabilities – which only makes sense since it is nestled in the heart of Silicon Valley, just blocks from Intel Corp. INTC, -0.82%  and Citrix Systems Inc. CTXS, +0.30%

Indeed, one tech startup is based within the stadium here. VenueNext Inc., a 7-year-old company in San Francisco, has a smartphone app for the stadium that handles everything from tickets and parking to in-seat food delivery and instant replays.

Forty-nine solar panels collect and disperse energy from atop the gleaming home of the 49ers. Far below, 2,000 beacons and 1,300 Wi-Fi spots track and record important digital information — whether for a big game, like this weekend’s NFC Championship or a concert, like the Rolling Stones show in August.

There is little doubt as to what is the crown jewel of the 49ers’ tech push. Executive Huddle is the outgrowth of a meeting with SAP officials in Germany in mid-2017, says Dan Fleetwood, vice president of SAP AG’s Global Partnerships. The platform went into full use this season, and the team has outsize plans for next season: Mobile orders of selected food and drink items for 18,000 season-ticketholders.

“They are an innovative team willing to try new things,” Fleetwood told MarketWatch in a phone interview. “And the sports industry is a copycat industry.”

Shortly after this reporter visited the suite that houses the data-analytics dashboard on the stadium’s eight floor, representatives from the Vikings dropped in to learn more about it. Guido added that Atlanta Falcons, Los Angeles Rams, Los Angeles Chargers, and soon-to-be Las Vegas Raiders — all of whom play or are scheduled to play in new stadiums — have expressed interest in replicating the 49ers’ model.

Forrester analyst Brandon Purcell, who closely follows the topic, expects more teams to follow suit in North America and Europe in a push to draw and retain casual fans. “The happier the fan experience, the more likely they are to return for another game,” Purcell told MarketWatch.

“It is a work in progress that we keep refining,” says Steven Chan, director of business intelligence and analytics for the 49ers. He previously worked on data-warehousing projects with the likes of Alphabet Inc.’s GOOGL, +0.60% GOOG, +0.58%  Google, eBay Inc. EBAY, -0.06%  , Microsoft Corp. MSFT, +0.65%  , and others. “We plan to eventually use machine learning and predictive analysis,” he said, adding that the team aggregates data based on trends, not individual data.