Home
Market
U.S. and China Sign Phase One of Trade Deal
Prev Article Next Article
This post was originally published on this sitehttps://i-invdn-com.akamaized.net/content/pic6561f85560247969f4b5d3c9f4590548.jpg 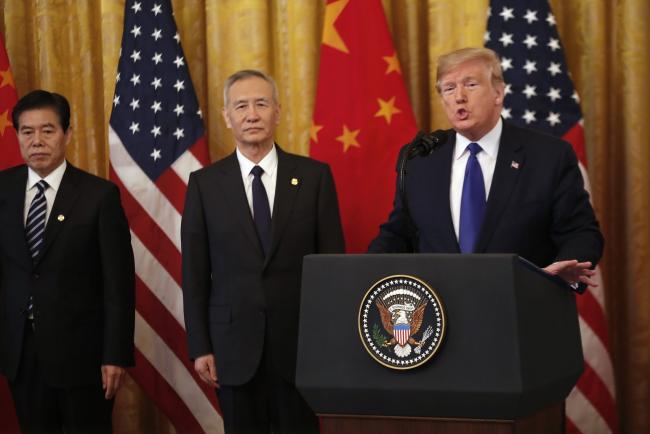 (Bloomberg) – The U.S. and China signed what they’re billing as the first phase of a broader trade pact on Wednesday amid persistent questions over whether President Donald Trump’s efforts to rewrite the economic relationship with Beijing will ever go any further.

The deal commits China to do more to crack down on the theft of American technology and corporate secrets by its companies and state entities, while outlining a $200 billion spending spree to try to close its trade imbalance with the U.S. It also binds Beijing to avoiding currency manipulation to gain an advantage and includes an enforcement system to ensure promises are kept.

The ceremony at the White House, which included Trump, dozens of American business people and Chinese officials, was a rare moment of friendship lately between the world’s two largest economies. Acrimonious talks stretching back almost three years have roiled financial markets, cast a cloud of uncertainty over investment decisions and hurt growth in both nations.

“This is a very important and remarkable occasion,” Trump said at the signing. “Together we are righting the wrongs of the past.”

The deal, sealed on the same day the House prepared to refer articles of Trump’s impeachment to the Senate, has already been criticized for what is missing. It does nothing to address areas like what U.S. authorities have long claimed is China’s state-backed hacking of American companies and government institutions. Nor does it require the Asian nation to reform the vast web of state subsidies that form the spine of its model of state capitalism and have helped fuel the rapid growth of Chinese companies compete internationally.

The administration says many of those issues will be covered in a second phase of a deal, though when those talks will begin and how long they will take remains uncertain. In the meantime, the U.S. is also set to maintain tariffs on roughly two-thirds of imports from China.

“As soon as this kicks in we’re starting phase two,” Trump said. “I will agree to take those tariffs off if we’re able to do phase two, otherwise we don’t have any cards to negotiate with. They will all come off as soon as we finish phase two.”

At the ceremony, Chinese Vice Premier Liu He read a letter from President Xi Jinping, stating the two sides have to implement the agreement “in real earnest.”

“I hope the U.S. side will treat fairly Chinese companies,” he said through an interpreter. In his own comments, Liu said China will “strictly honor” the pact.

Trump’s top negotiator, U.S. Trade Representative Robert Lighthizer, told reporters ahead of the signing that the administration was focused on implementing the initial agreement in the short term. Any further negotiations will only come after that, he said.

Officials also insist that they are harvesting significant commitments from Beijing that mean the phase one agreement will benefit U.S. businesses and workers even if discussions never go any further.

The deal requires China to do more to stop the sale of pirated goods and to apply criminal penalties on anyone caught steeling commercial secrets. It also requires Beijing to deliver an action plan withing 30 days of the deal taking effect on how it intends to meet its commitments.

It also requires China to stop pressuring American companies investing in the country to share technology with local joint-venture partners. The agreement stipulates that the Chinese must stop supporting or directing the acquisition of overseas investment aimed at buying up technologies.

“This is an enormous win,” Treasury Secretary Steven Mnuchin told reporters ahead of the signing, pointing to Chinese commitments on IP that will affect the technology sector as well as other reforms on currency, the opening up of the financial services sector to U.S. companies and the promised spending spree.

Other supporters of Trump’s trade policies insist that the initial deal goes a long way toward addressing the IP issues that were at the core of the case brought against China. “Anyone complaining that this doesn’t resolve every U.S.-China issue needs to recall that this entire negotiation was based on a report on China’s IP and techtransfer policies,” said Clete Willems, who until last year was a member of Trump’s national economic council and is now at law firm Akin Gump.

China has already moved to address some U.S. complaints on IP. Over the past year, it has made a rapid-fire series of legal changes amid the negotiations to beef up protection. A new foreign investment law that took effect on Jan. 1 bans administrative agencies from forcing companies to transfer technological knowhow as a cost of entry to the Chinese market. It also exposes officials who disclose or leak trade secrets gleaned from regulatory approvals to potential criminal penalties.

The U.S. is also moving to address remaining issues like industrial subsidies in other ways. On Tuesday the U.S., European Union, and Japan said they had agreed on the content of new stricter global rules on subsidies aimed largely at China and would be mounting a joint push to build support for them internationally.

The Trump administration says what separates its deal most from others is the enforcement mechanism it establishes. Rather than rely on a slow-moving World Trade Organization dispute system that Trump in any case has already hobbled by blocking the appointment of top judges, the new agreement with China would allow the administration to move to punish Beijing with tariffs or other measures within 90 days if officials decided it was breaking its promises.

But even Lighthizer acknowledges how effective that mechanism will be depends on Beijing. “This deal will work if China wants it to work,” he said Wednesday.

The deal is also unique in the breadth of specific Chinese purchase commitments it contains, which some critics in the U.S. see as uncomfortably reminiscent of the sort of state-directed central planning American diplomats have spent decades trying to get China to abandon. Even those purchase promises, the details of which are contained in a secret annex to the agreement signed on Tuesday, face questions.

The text of the deal released Wednesday specifies $77.7 billion in Chinese purchases of manufactured goods including aircraft, $32 billion in agricultural products, $52.4 billion in energy and $37.9 billion in services in the two years through December 2021.

Much of the attention has focused on whether U.S. farm exports to China can reach the $40 billion to $50 billion annual level that Trump has promised, which would mean doubling the $24 billion in agriculture and related products it imported from the U.S. in 2017, before the trade war began.

There are also questions over a Chinese commitment to buy an additional $50 billion in U.S. oil and gas over two years and pledges to step up purchases of cars, planes and other manufactured goods.

To meet the energy target, China would have to import roughly one-third of the 3 million barrels a day of crude that the U.S. exported last year over a two year period, according to Bloomberg calculations. Which is why analysts believe meeting that deal may depend heavily on buying , which is usually traded via long-term contracts rather than spot purchases.

However, China may not have much appetite for any additional gas right now beyond the long-term contracts it has already committed to as it continues to struggle with a slowing economy and a slowdown in demand growth and already-brimming stockpiles. Likewise, U.S. LNG export plants have most of their volumes tied up in their own long-term contracts and would only be able to provide China with a marginal amount of spot supply over the next two years.