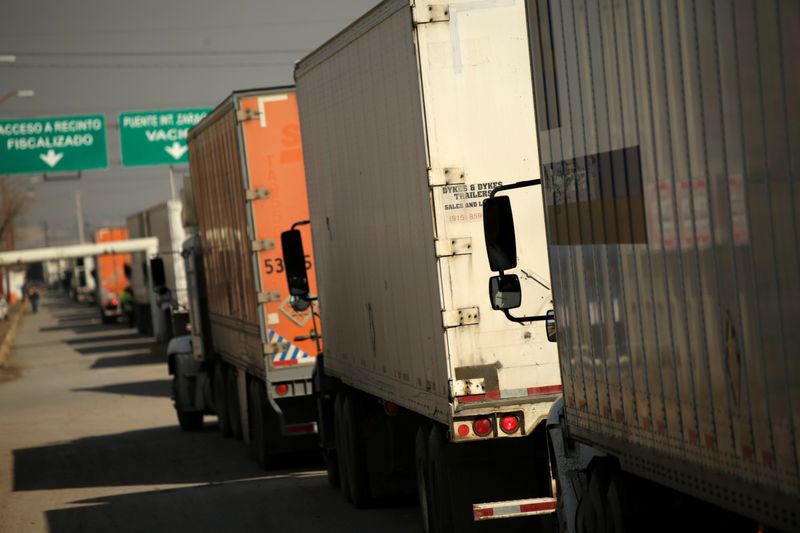 © Reuters. Trucks wait in a queue for border customs control at the Zaragoza-Ysleta border crossing bridge in Ciudad Juarez

LOS ANGELES (Reuters) – California’s new “gig worker” law does not apply to independent truck drivers because they are subject to federal statute, a Los Angeles judge ruled, handing a victory to one industry that is challenging a state effort to clamp down on labor abuses.

The law, known as AB5 and which took effect on Jan. 1, makes it tougher for companies to classify workers as contractors rather than employees, a classification that exempts them from paying for overtime, healthcare and workers’ compensation.

Truckers have mounted the strongest defense against AB5, which is best known for striking at the heart of high-profile “gig economy” businesses like Uber Technologies (N:) and Postmates Inc, which depend on freelance workers to provide low-cost transportation and deliveries.

Highberger ruled in favor of NFI Industries’ Cal Cartage Transportation Express and other trucking companies that were sued by Los Angeles City Attorney Mike Feuer for allegedly misclassifying truck drivers as independent contractors rather than employees.

Feuer said his office would appeal.

“As the Court itself stated, ‘… there are substantial grounds for difference of opinion,'” Feuer said in a statement emailed to Reuters.

Highberger’s decision came eight days after the California Trucking Association won a temporary restraining order in a separate challenge to AB5. Another hearing in that federal case is scheduled for Jan. 13.

California is home to 450,000 contract workers. Roughly 70,000 of them are independent big-rig owner-operators who transport everything from ocean cargo containers to strawberries.

Uber and Postmates on Wednesday asked a federal judge to issue a temporary injunction. They argue that AB5 is unconstitutional because it singles out their workers in violation of equal protection guaranteed under the constitutions of the United States and California.