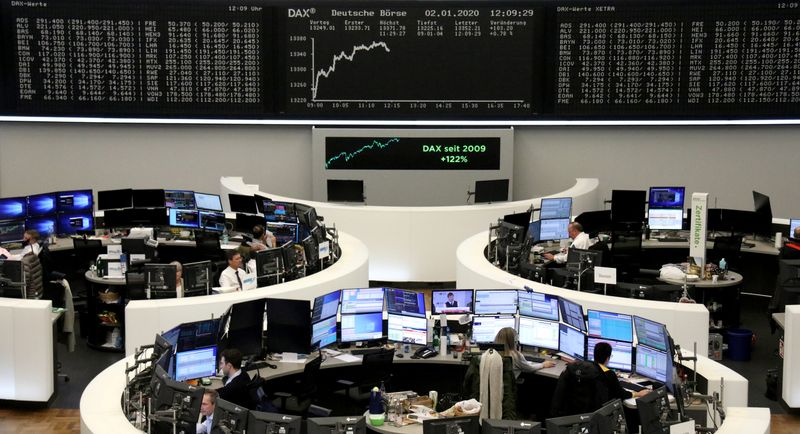 (Reuters) – European shares slipped from near record highs on Friday after a U.S. air strike in Iraq killed a top Iranian commander and fanned tensions in the Middle East, with a surge in oil prices hammering airline stocks.

The pan-European STOXX 600 index () was down 0.8%, with all the major country indexes well in the red.

“We are only into the third day of the new year, and a big fat dollop of geopolitical uncertainty has landed on investors’ desks already this morning,” said Jeffrey Halley, senior market analyst at OANDA.

The benchmark European index ended Thursday a point away from its record high, and some analysts pointed to Friday’s selloff as a way for traders to reposition for the new year.

“The Middle East tensions are a great excuse to cut back on your equities (after a strong rally),” said David Madden, analyst at CMC Markets.

“We could have a bit of uncertainty and elevated oil prices for a few more days, but I don’t see this derailing global equity markets and beginning a major selloff.”

Frankfurt shares () gave up 1.5% on Friday, as data showed unemployment in Europe’s manufacturing powerhouse rose more than expected in December. Focus now turns to German inflation data due later in the day.

Among stocks, Swedish tobacco group Match (ST:) rose 3.7% to the top of the STOXX 600 after the U.S. Food and Drug Administration said near-term action against flavored cigars that had been included in a March 2019 draft guidance had been removed.