Home
Stocks
Outside the Box: 10 bad ideas this year include the Green New Deal, Trump’s protectionism and Warren’s central planning
Prev Article Next Article
This post was originally published on this site 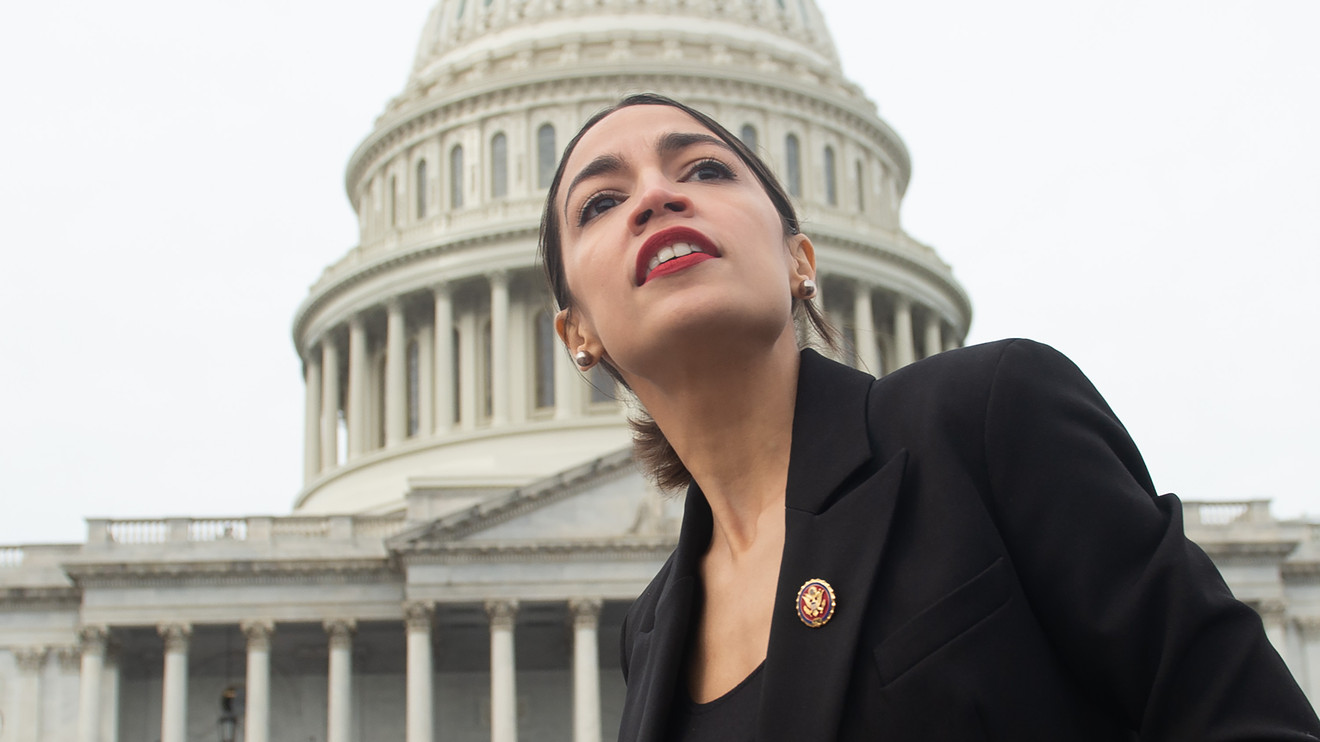 At first glance, 2019 was a rough year for anyone in favor of an economy and society guided from the bottom up by people with the freedom to exchange, cooperate and think as they choose.

The highly visible left flank of the Democratic Party, fully embracing socialism in name and approach, erupted with proposals that would drastically change the country in ways they intend and many more in ways they do not.

Meanwhile, the Republican Party’s debt from its Faustian bargain with President Donald Trump began to come due.

What can we learn from bad ideas? Plenty, if we approach them with curiosity rather than assumed intellectual or moral deficiency on the part of those trafficking in them.

The truth that people have a really hard time understanding the benefits of free markets and bottom-up organization is both difficult and galvanizing. Free-market ideas don’t really have a place in the current incarnation of our two-party system. We’re free agents and that can open a world of new possibilities if we let it.

There will be plenty of time for resolutions. Right now let’s have some fun and run the bloopers reel, in no particular order, of the year’s bad economic ideas.

1. The Green New Deal: Making precise predictions about the climate is nearly impossible, a fact any economist should respect. The U.N. Reports frequently referenced by the environmental left paint a serious picture, albeit one that can’t be summed up in the boldface blurbs our politics and media demand. Those reports don’t go as far as to predict “mass extinctions,” but proponents of plans like Bernie Sanders’ harrowing $16 trillion Green New Deal do. The plan misunderstands climate complexity just as much as Sanders’ billionaires narrative misunderstands the economy. But most frustratingly, supporters present a 12-year doomsday clock and then pile on a wishlist of not-directly-related progressive policies. The debate cannot go forward until Green New Dealers back up the claim of mass extinctions, or walk it back.

2. Hipster antitrust: The emboldened far left also has big plans for antitrust. The nexus of regulatory policy and case law that defines our efforts to check the power of big business has been imperfectly but effectively delineated by the consumer welfare standard since the late 1970s. The self-proclaimed New Brandeisians, who earned the “hipster” moniker as a wry nod to their retro pre-consumer welfare aesthetic, focus on a host of other scenarios where big business might rear its head, such as labor market power. The economists behind the recent Utah Statement recommend numerous specific changes to regulation and legal doctrine, but what emerges is vast discretionary power for regulators and a rubber stamp for courts. Hopefully, the Utah Statement will be the hipster antitrust movement’s Garden State, the moment when something cool becomes so obviously overwrought and precious that’s its silliness is on display for all.

3. Breaking up big tech: Look no further than the New Brandeisians’ flagship project, the dismantling of tech giants Google holding company Alphabet GOOG, -0.63% GOOGL, -0.57%, Facebook FB, +0.15% and Amazon AMZN, +0.06%, for the dangers of these ideas. These corporations’ ascent raises new challenges such as data security and the control of information. It also reframes old issues, such as whether network effects that make bigger social platforms more valuable to consumers mitigate concerns over market power. Reevaluating the consumer welfare standard for the 21st century should be an “intellectual feast” for antitrust economists, but has instead become a potent political rallying cry invoking fear of the unknown and the incessant scapegoating of big corporations. There are no angels here — these companies have misstepped or worse and will do so again. But in a market where technological change still has a long course to run, lasting solutions will come from evolution — not intelligent design.

4. Protectionism: Our hipster friends may look back 50 years in search of policy, but nobody does retro quite like Peter Navarro, the one-man intellectual lawn mower engine keeping President Donald Trump’s disastrous trade policy sputtering along. Let’s call it early 1770s-chic, not bothering himself or the president with mainstream thinking such as Adam Smith’s debunking of mercantilism in “The Wealth of Nations.” It’s easy during Democratic primary season to forget just how anti-business our tycoon-president is, missing that international trade is commerce between people and firms across an ocean and instead envisioning himself and the Chinese premier across a chess board. With neither side approaching checkmate, the people of both countries lose. There’s strong evidence that tariffs are behind the recent economic downturn, and the fact the president has wiped out most of his corporate and income tax cuts is undeniable.

5. Billionaire tears: Let’s keep this simple: When candidates and their backers propose financially harming billionaires, the next question must be “who is helped, and how?” Is the debate about taxation and policy, over which fair minds can disagree, or merely crass post-Trumpist scapegoating? The latter is always misleading and corrosive, no matter how much money the target has.

6. New tech, old jobs: Technological change never stops but that rarely prevents policymakers from trying to turn back the clock to the known, comfortable, and counterproductive. The so-called sharing economy, really about matching small buyers and sellers, has created unprecedented numbers of contract-work opportunities. We could be talking about ways to change with technology — health care and other benefits that move with workers instead of the now oddly longed-for days where company men had their needs met by the factory at which they worked their entire career. Proposals like California’s new crackdown on contract work may do the most harm by foreclosing opportunities that would only be revealed as technology and the labor market continued to coevolve.

7. Bitcoin maximalism: As crypto continues its strange journey, bitcoin BTCUSD, -1.25%  maximalists who believe the original blockchain technology will, must and should become all the money everyone uses remain its strangest travelers. It’s likely safe to bet against the predictions of someone who says the “free market” means they know exactly what’s going to happen. It’s an even safer bet when inevitability requires online bullying that grows in desperation as true uncertainty increases. While not perfectly overlapping, bitcoin maximalism carries whiffs of “libertarians” who want the government out of the way so they can be the ones in charge. Market participants can be admonished to HODL, but markets won’t cave so easily, and they’ll decide what if any cryptocurrencies are in our future.

8. Inhale this, don’t inhale that: We don’t fully know the health risks of vaping nicotine oil, though to an addicted smoker they may be life-saving. The wave of deaths that turned out to be from an illness caused by vitamin E oil in bootleg THC vapes was disturbing and tragic. It also paled in comparison to the number of smokers who die every day, but the four-month ban Massachusetts just lifted shows the potency of the expectation that politicians “do something.” Meanwhile, “legalizing” cannabis gave the state carte blanche to lord over sellers in ways that a mature industry wouldn’t tolerate — after a year, 75% of sales remained away from the state’s grasp on the black market.

9. Elizabeth Warren: The U.S. senator from Massachusetts and presidential hopeful stakes at least a partial claim each of items one through six on this list (yes, even Trumpist protectionism). So why does she get her own spot? Warren represents something new in an American political scene that desperately needs fresh thinking, but her hyperactive technocracy combined with fire-breathing populism represents just about the worst embodiment one could find of central planning in mainstream politics. Sen. Bernie Sanders, Warren’s rival on the left, loses interest in the private sector when he can’t dismantle it. Warren, on the other hand, wants to run the private sector. Her staggering number of plans, several dozen and more than I care to count at the time of this writing, would give her administration unprecedented discretionary power over the corporations and wealthy individuals she often demonizes. One could certainly see private wealth having the last laugh with countless new points of entry to the levers of government power. Or perhaps Warren could set us on the road to a state-capitalist model. That seems outlandish but Warren has repeatedly stunned me with her hubris this year as she produces plan after plan that indicate she thinks the right person just needs to tell companies what to do.

10. National conservatism: The left has unsurprisingly occupied most of the spots on this list — they’re the opposition and we’re approaching primary season, which means plenty of ideas from radicals and one or two from centrists. Given the litany of destined-to-fail Hail Marys on this list, one might think the right would find it expedient to double down on its perceived affinity for free markets, but that would be easier had the perception ever been true. Events like Yoram Hazony’s national conservatism conference suggest that for much of the right “free markets” always meant what the left assumed it did — a preference for big business and the businessman in his place atop society’s hierarchy. In truth, capitalism and conservatism don’t go hand in hand, the former being a force for constant change in society through bottom-up evolutionary means that, while messy, offer sounder guidance than any hand. Our system may offer the choice between Donald Trump and Elizabeth Warren. Bring it on. Never have those in the free-market camp been ceded more ground, but we need to jettison our old bad ideas too. Let’s be clear, libertarians have repeatedly made the mistake that right-populists also want small government. They don’t. They want to be the government. This isn’t a quick-turnaround opportunity, and more elections will likely come and go before we’re out of this hole.

A lot of those bad ideas above have the seed of good intentions and those intentions can be met far more effectively by markets, philanthropy and private governance. It may require patience and some dead-end bad ideas of our own, but the potential is out there to make people’s lives better without making everyone’s worse. That’s a daunting resolution for the new year, but consider the alternatives.

This article was published with permission by the American Institute for Economic Research.

Max Gulker is an economist and writer who joined the American Institute for Economic Research in 2015. His research focuses on two main areas: policy and technology. Gulker holds a doctorate in economics from Stanford University. Follow him on Twitter @maxgAIER.